Best time to visit Mykines and see the puffins is probably from mid May to mid August. My trip was in the last week of May and I got the best weather one could ever hope for! If you want to take pictures of the puffins with fish in its beak, probably beginning of July would be the best time. At the end of May puffins were still building their nests and their chicks hadn't hatched yet.

How to get to Mykines

There are two ways to get to the Mykines: ferry and helicopter. The helicopter is mostly used by locals and tourists cannot book two-way tickets for the same day, so I booked the morning ferry to go there and helicopter to come back the next morning. Everything can be booked and paid online, including the tourist tax to be able to visit the island. There are no shops on the island, so you have to buy your food before you go there.

Even though it was all sunny for the past week, seems that the waters weren't so calm. I was checking the ferry schedule all the time and every day the ferry got cancelled. My host was saying that there were people coming all the way from Australia to see the puffins on Mykines, but they couldn't go to the island because the ferries were cancelled all the time. I was really nervous that this will be also my fate, but somehow, everything aligned and the ferry actually went to the island on the day that I booked it! It was packed full and there were some people that couldn't board it and they got left behind. It was a bit rough, but after 45 minutes we finally arrived. I booked one night in Katrin's house on Airbnb and if I knew what a lovely place this is I would have stayed longer! This house has everything you need! It was amazing that such a remote place, with only 10 people has warm water, electricity, heat and everything needed for a normal living.

If you are really into birds and Mykines is a must see for you, I would recommend to just book the helicopter and stay on Mykines for 2 nights. Helicopters seem to not get cancelled so frequently as the ferries, so this would be a safe bet! If you are afraid you'll get bored, there is more to see on the island than just the puffins! The other side of the island is so calm and peaceful and it has really beautiful views! If you are a photographer I guarantee that you won't get bored on Mykines for 2 nights!

I read a few blogs and I also talked with the locals and it looks like people getting stranded on the island is a common thing! Luckily the locals are nice enough and welcome tourists into their home, but I would still play it safe and just book the helicopter and a place to stay from the beginning with. 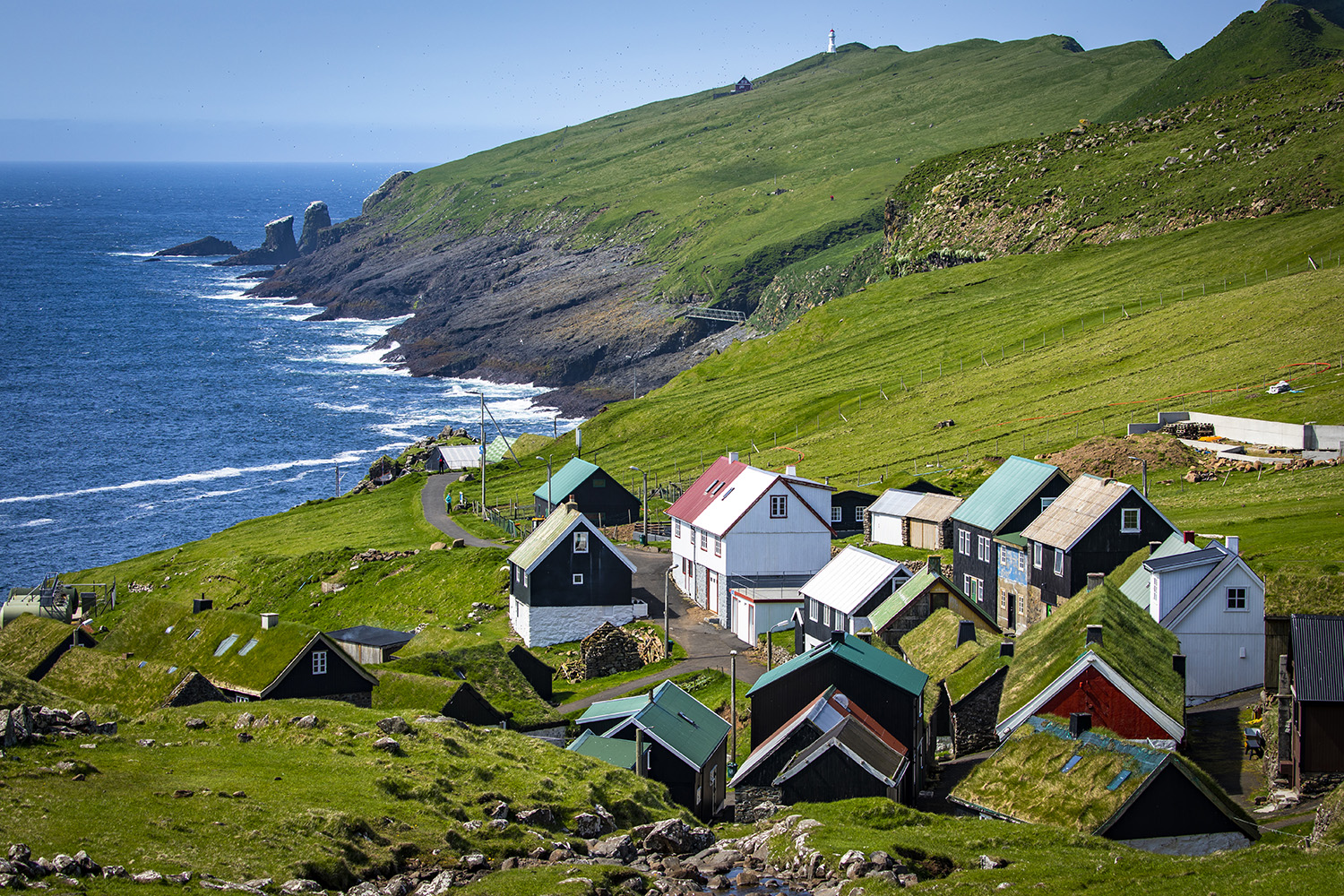 The whole island of Mykines is a paradise for birds! Fulmars, gannets, puffins and guillemots are found in great numbers here! The big colonies of puffins and gannets are on the way to the lighthouse and can only be accessed between 9:00 and 17:00. I booked a local guide, Heini Heinesen (http://visitmykines.com/um_meg_en.html), to help me find the best spots for photography and I am really glad I did. I was a bit afraid to go close to the edge of the cliffs on my own, so thanks to him I was able to get the best shots of gannets that I could have hoped for! 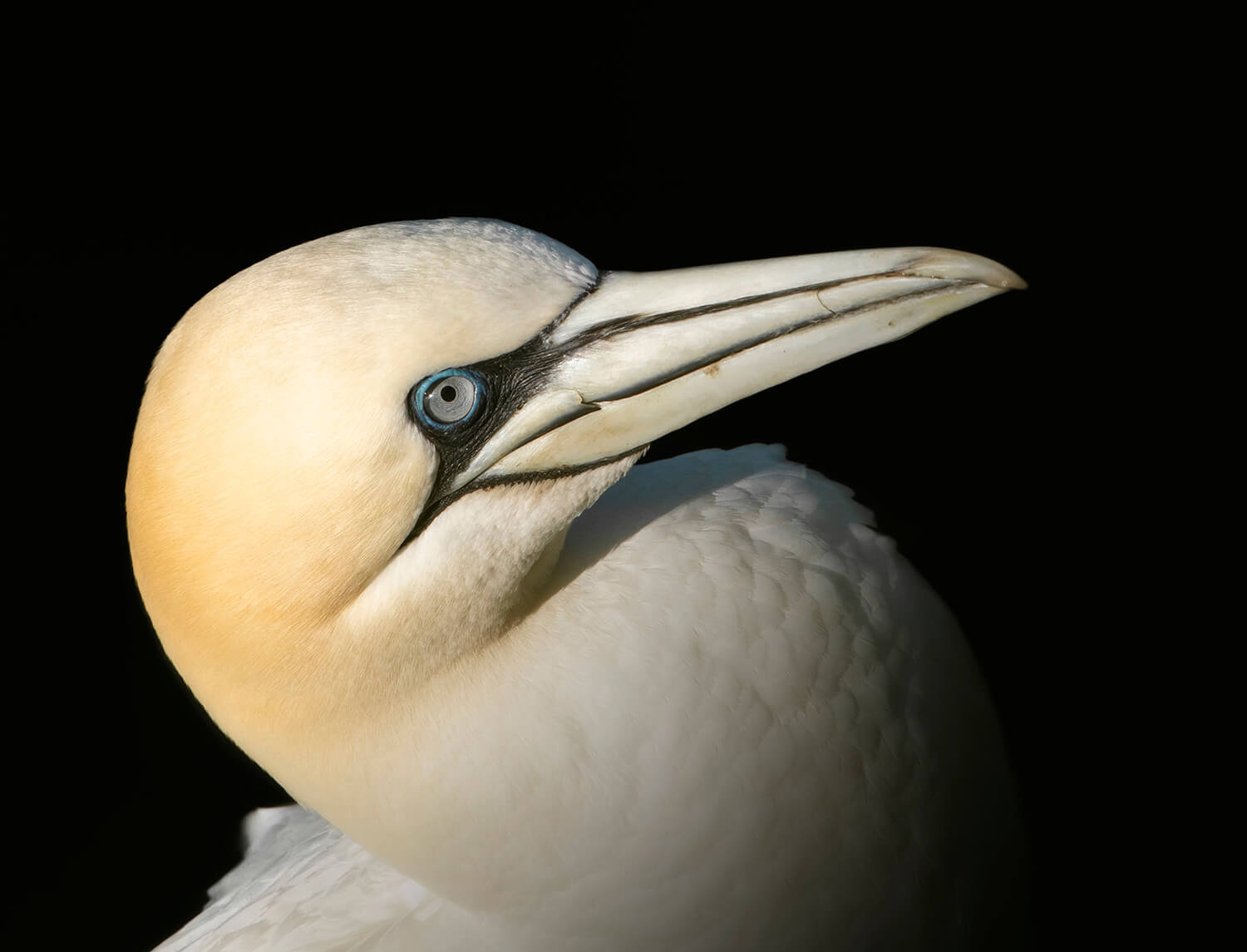 Mykines has one of the biggest colonies of puffins in the world and it's a birder's paradise! Hundred of puffins flying over your head, puffin burrows everywhere and these birds are fearless, however you shouldn't block their paths to their burrows.

On the way to the lighthouse you'll see a lot of puffins, but you'll definitively notice when you are in the middle of the colony! Hundreds of puffins flying over your head and hundreds of burrows where they nest! You'll get to this point after you cross a bridge. From the bridge you can see also many fulmars and kittiwakes nesting. Under the bridge are more guillemots! 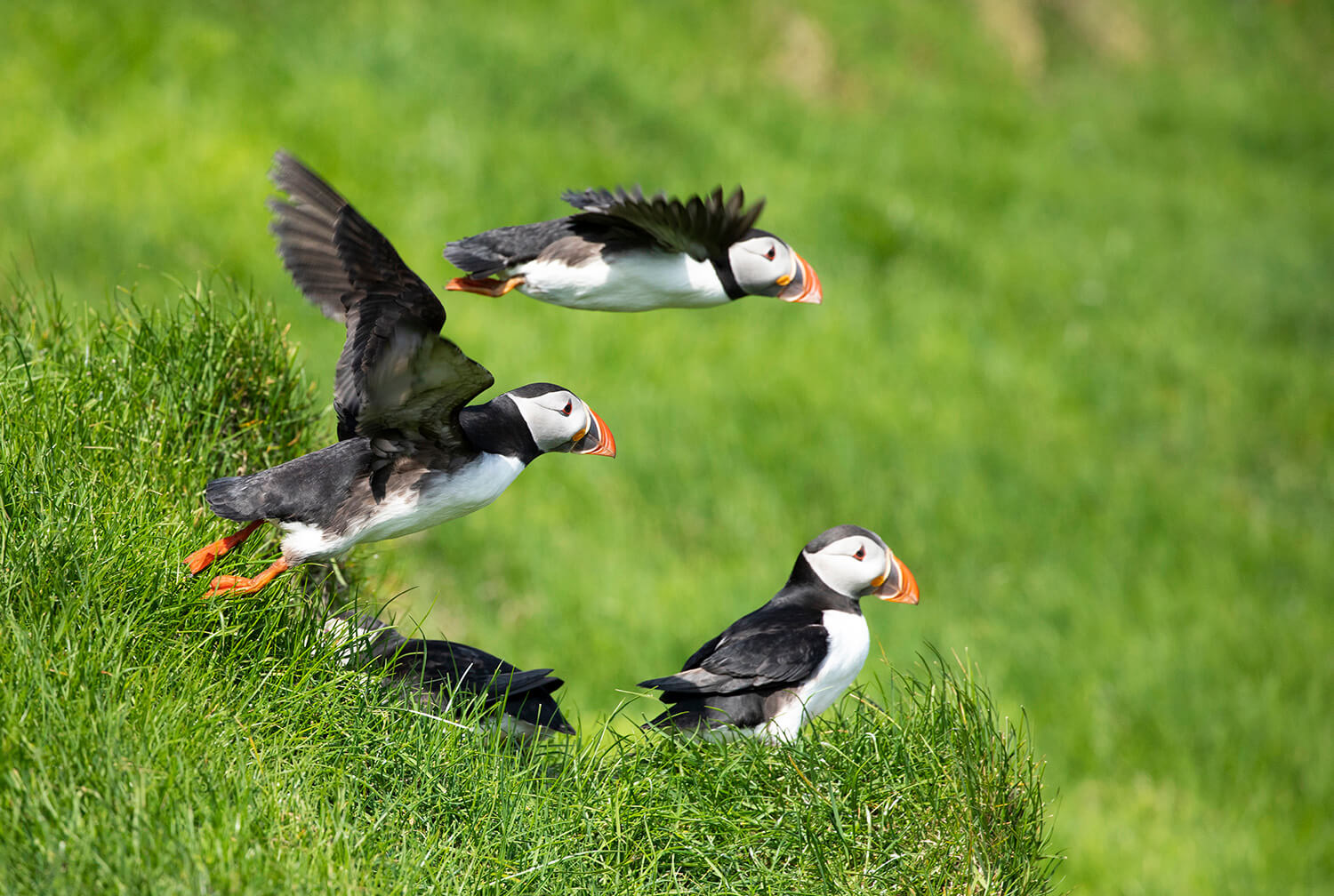 Unfortunately the sun was really bright, so many of the pictures that were taken during the day are a bit burned, but I still want to show the sheer number of these birds!

The guillemots are a bit further away and it's not really possible to get too close to them. 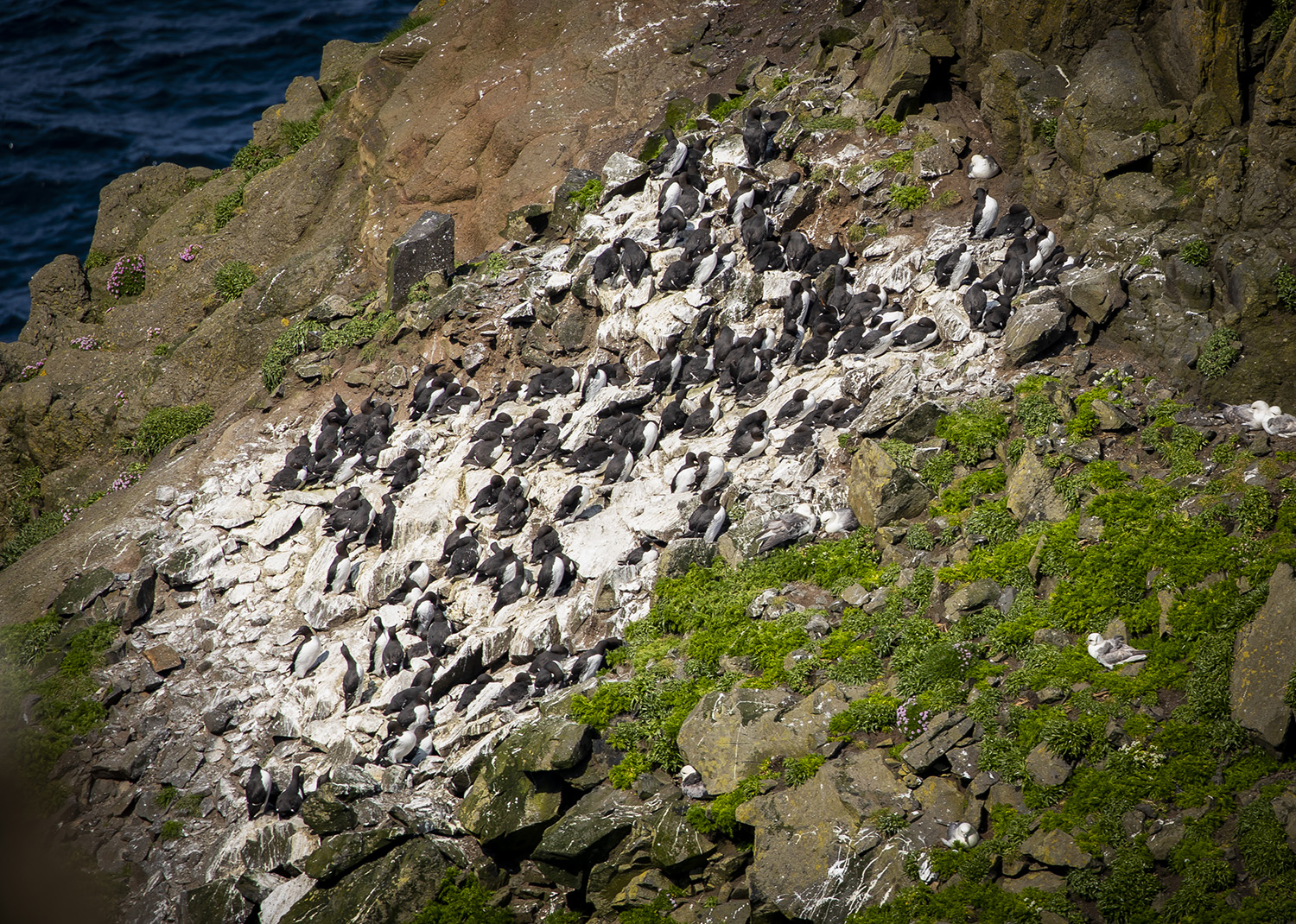 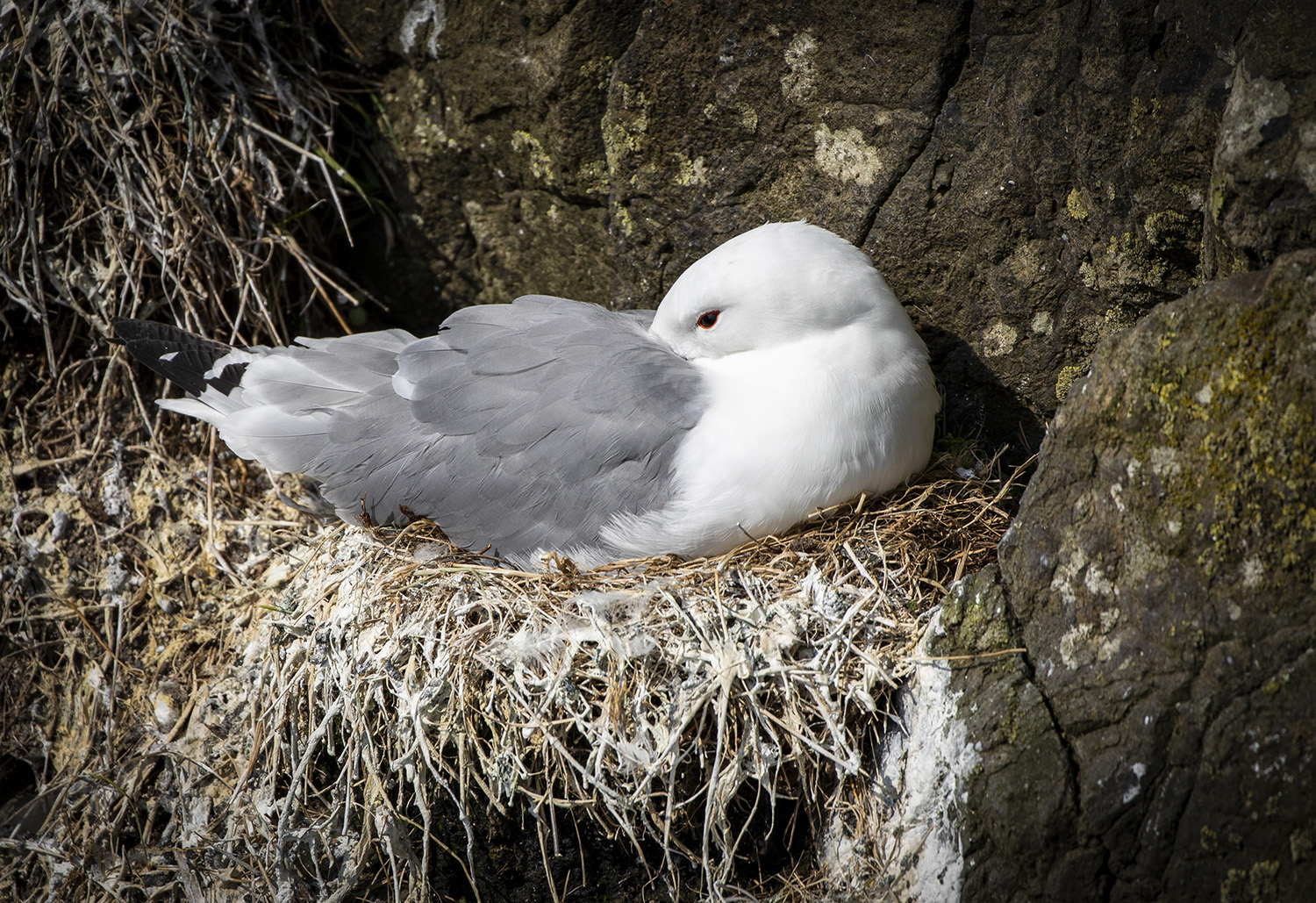 The gannets are on the way to the lighthouse (after the puffin colony) and to actually see them up close you'll need to stray a bit from the main path and go towards the edge of the cliff, just before reaching the lighthouse. Be careful! There is no bird worth risking your life and you don't really need to be that close to the edge to see them. 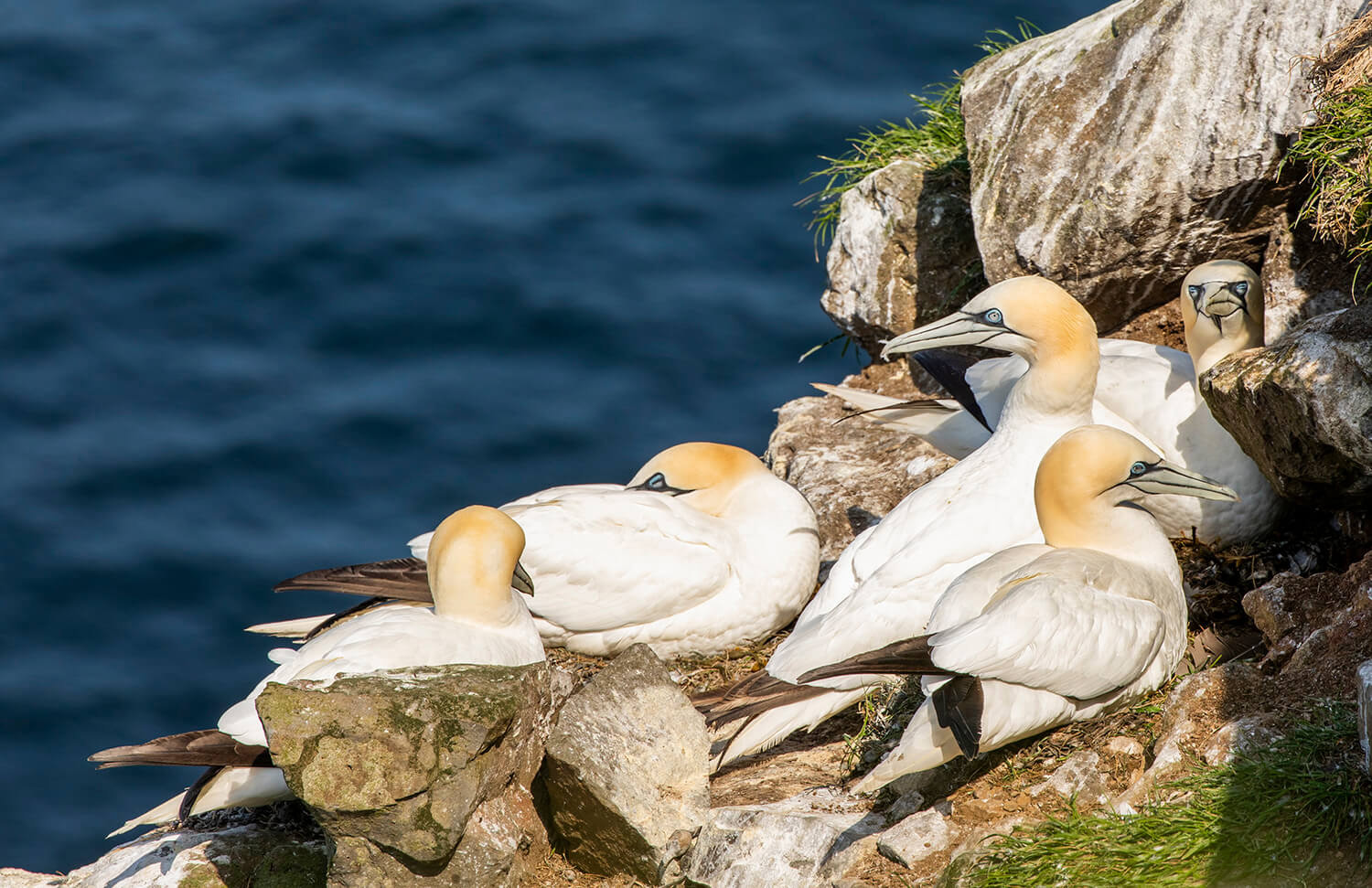 This might be a bit difficult hike, but don't give up! Your effort will be well rewarded with the awesome views and awesome birds! When you get to the lighthouse you'll see that there is a huge colony of northern gannets nesting on a rock near by. 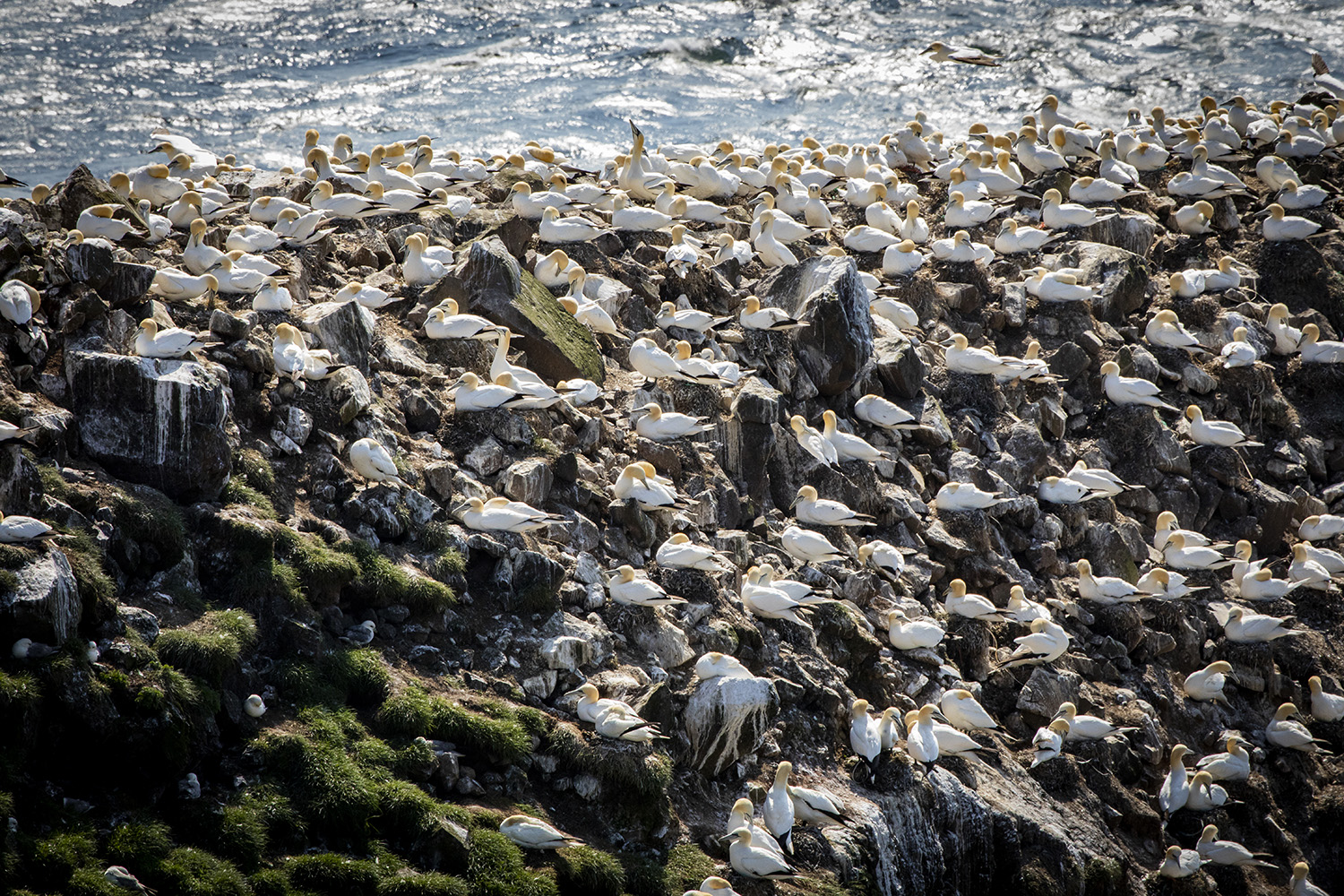 The great thing about the spending the night on Mykines is that after the last ferry leaves you have the island all to yourself! After resting for a couple of hours in my wonderful house, around 8 o'clock I went to check out the sunset. I had the best evening surrounded by these birds and an awesome sunset! It was just me and the puffins, occasionally some fulmars, oystercatchers and sheep! In the evening time I did not go to the lighthouse because it is really important to me to not disturb the birds! There are plenty of puffins to photograph outside of the big colony! 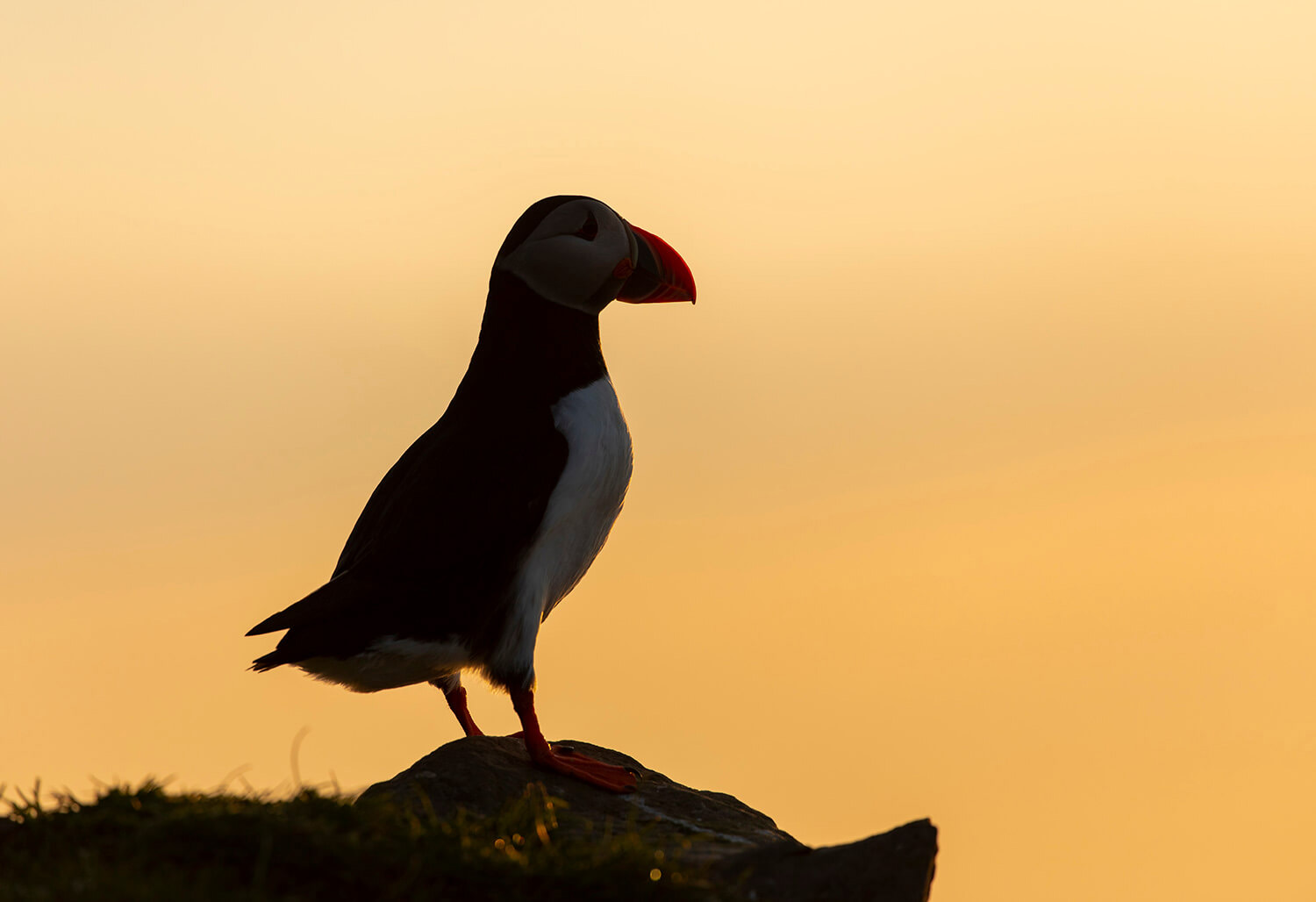 All of a sudden 2 fulmars land next to me and they start displaying some courtship dance with their beaks. They didn't seem to mind me at all and they continued their dance until I left.

Mykines was the highlight of my trip to Faroe Islands, I just wish I could have stayed a bit longer!

The next morning it was time to stay gooddbye to this awesome island! 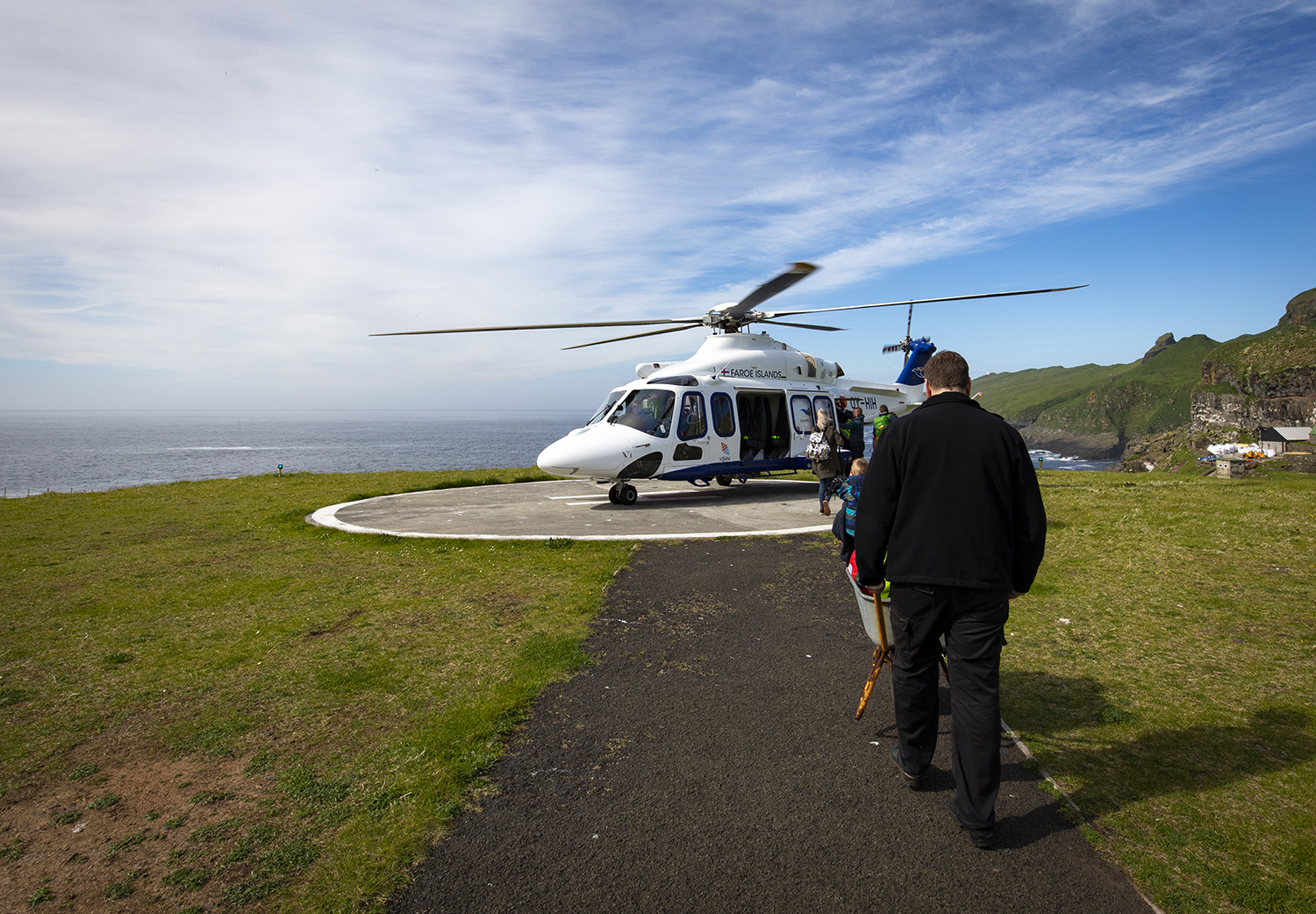 The view from the helicopter was awesome, but it looked like quite big waves out there. After arriving in Vagar I checked the ferries again and it turned out that they were cancelled. If I wouldn't have booked the helicopter I would have been stuck on the island for the night. 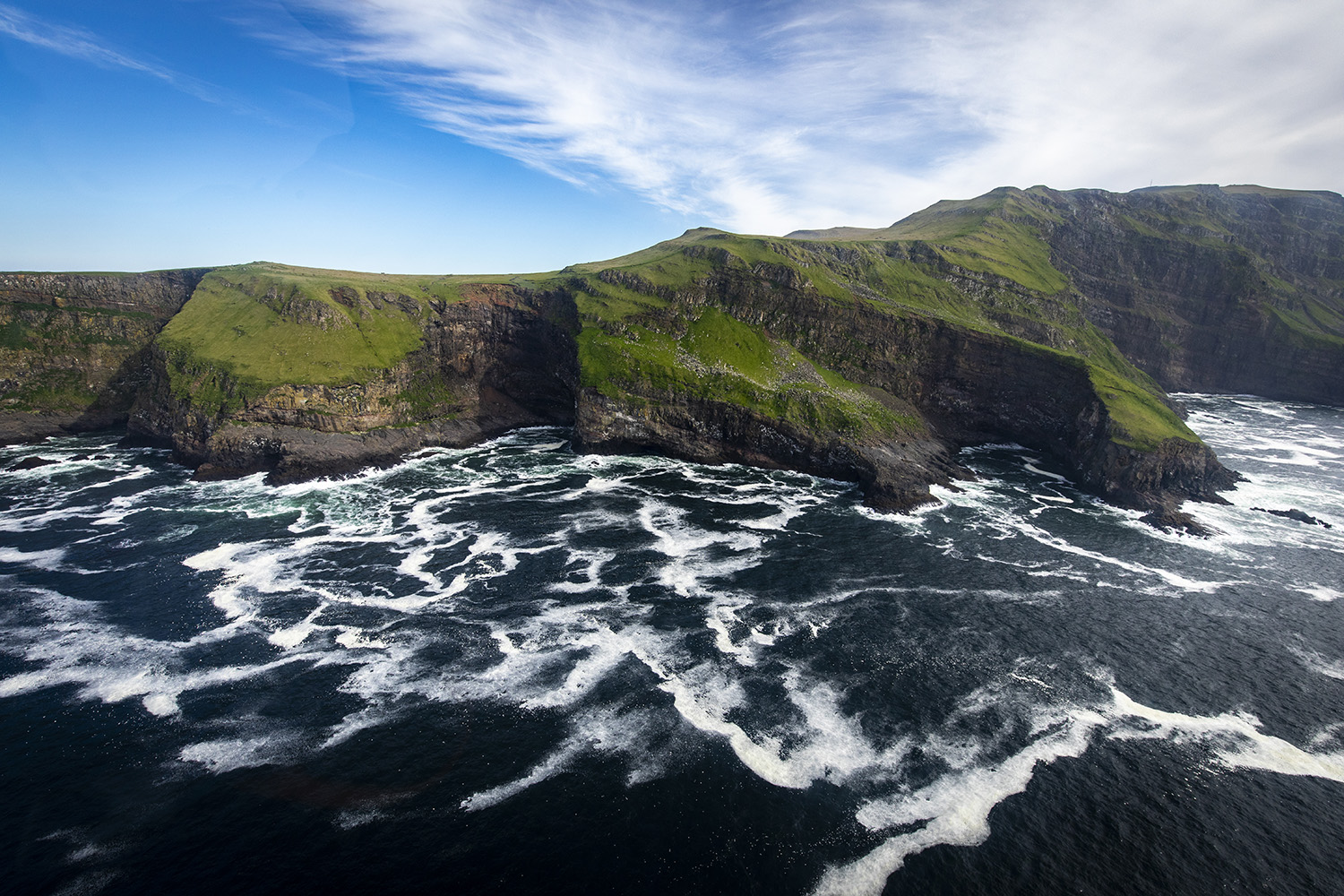 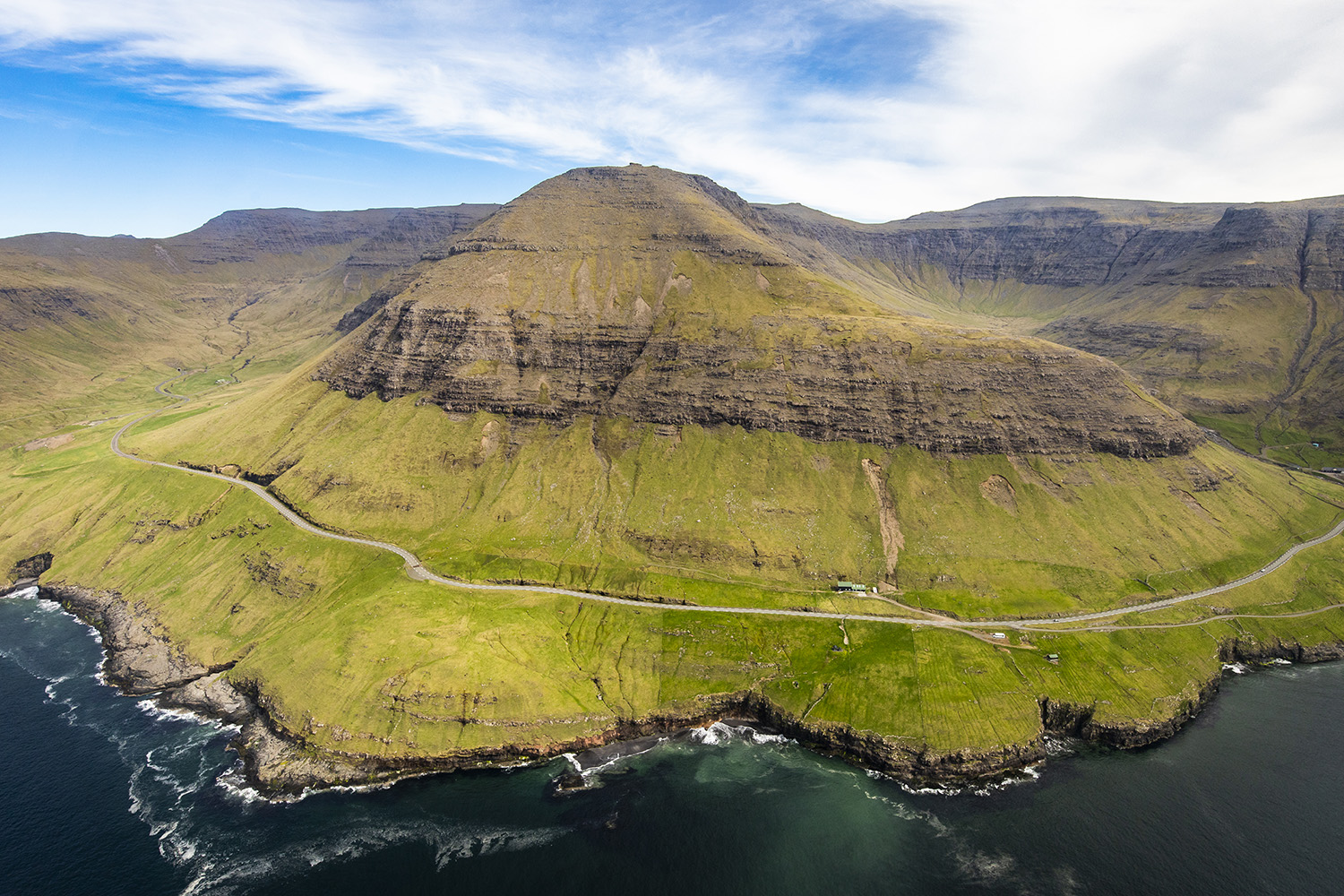 Mykines was the highlight of my trip to Faroe Islands, I just wish I could have stayed a bit longer!

Faroe Islands is one of the best places to visit as a solo female traveller! My first solo travel adventure took me to Faroe Islands and I will never forget it!

One of the last places in Europe that offers unspoiled and wild nature! This is a photographer's dream!