Faroe Islands is one of the best places to visit as a solo female traveller! My first solo travel adventure took me to Faroe Islands and I will never forget it!

I have been longing to visit Faroe Islands for a really long time, ever since I saw a photograph of Gásadalur in National Geographic Magazine some years ago. All this time I thought it's really difficult to get there, I made some excuses for myself and I kept postponing this destination because my boyfriend was not so enthusiastic to visit these islands with me. In his opinion, Faroe Islands are too cold and rainy and not worth the trouble.

After a really hectic time at work, I was ready to take a week off and just relax. Honestly all the people interaction in the workplace during that time made me feel very grumpy, sad and not in the mood to talk to anyone. I really felt like I need to get away from everything and the fact that I needed to do this alone suddenly was not so scary anymore. One day I just came home, very angry and I just looked for flights to Faroe Islands and booked everything. Turned out it wasn't even that difficult to get there. I live in Helsinki, so I just had to go to Copenhagen and then fly to Faroe Islands. The wait in Copenhagen was quite long, but anyway, not that difficult and not so far.

I remember I was quite uneasy for a couple of weeks before leaving, I even wanted to cancel everything. This was my first time ever going alone somewhere for an entire week. I grew up sharing a room with a sister and I basically lived alone only once, time when I was going home just to sleep because I couldn't stand the thought of being alone. See, where I grew up, it was not common for women to just go alone somewhere. You always had lunch with someone, you always met with someone to go somewhere, never alone. Then I moved to Finland and suddenly it was common to see women alone at the bar, or having lunch or having coffee. Also I have heard about many women here travelling alone, I just never thought I would ever do that myself.

My latest ever growing passion, photography, just couldn't let me miss this opportunity that I originally created for myself. Anyway, I couldn't cancel my trip because the tickets were non-refundable, so I would have lost quite a lot of money if I wouldn't have gone to the trip. So I went. It was 26th of May 2018.

On the flight to Faroe Islands I have noticed that there were actually quite many photographers, probably looking for the same thing as I was: peace, quiet and amazing landscapes! Once I arrived in Vágar Airport I had my first and only hiccup. When I went to get my rental car, my credit card was declined and they didn't want to give me the car. I was already panicking cause my card wasn't working, luckily I was prepared with 2 credit cards, Visa and Mastercard, from 2 different banks. Turned out that Visa had an outage throughout Europe that day, but Mastercard worked just fine. So if you are travelling alone, always make sure you get 2 different kind of credit cards! You never know when one stops working!

Since I didn't really know what kind of mountain roads to expect and I was also a relatively new driver, I booked an automatic car. Even if expensive, I was really happy with my choice and I was stress free the entire time I was driving in Faroe Islands. And I drove a LOT! I never had any incident of any kind with the car and most of the roads are quite wide and nice to drive on. The only small road was the road to Saksun, which had only one lane, so you had to stop and wait other cars in the safety pass, however I think I was mostly alone on that road both times when I drove there. 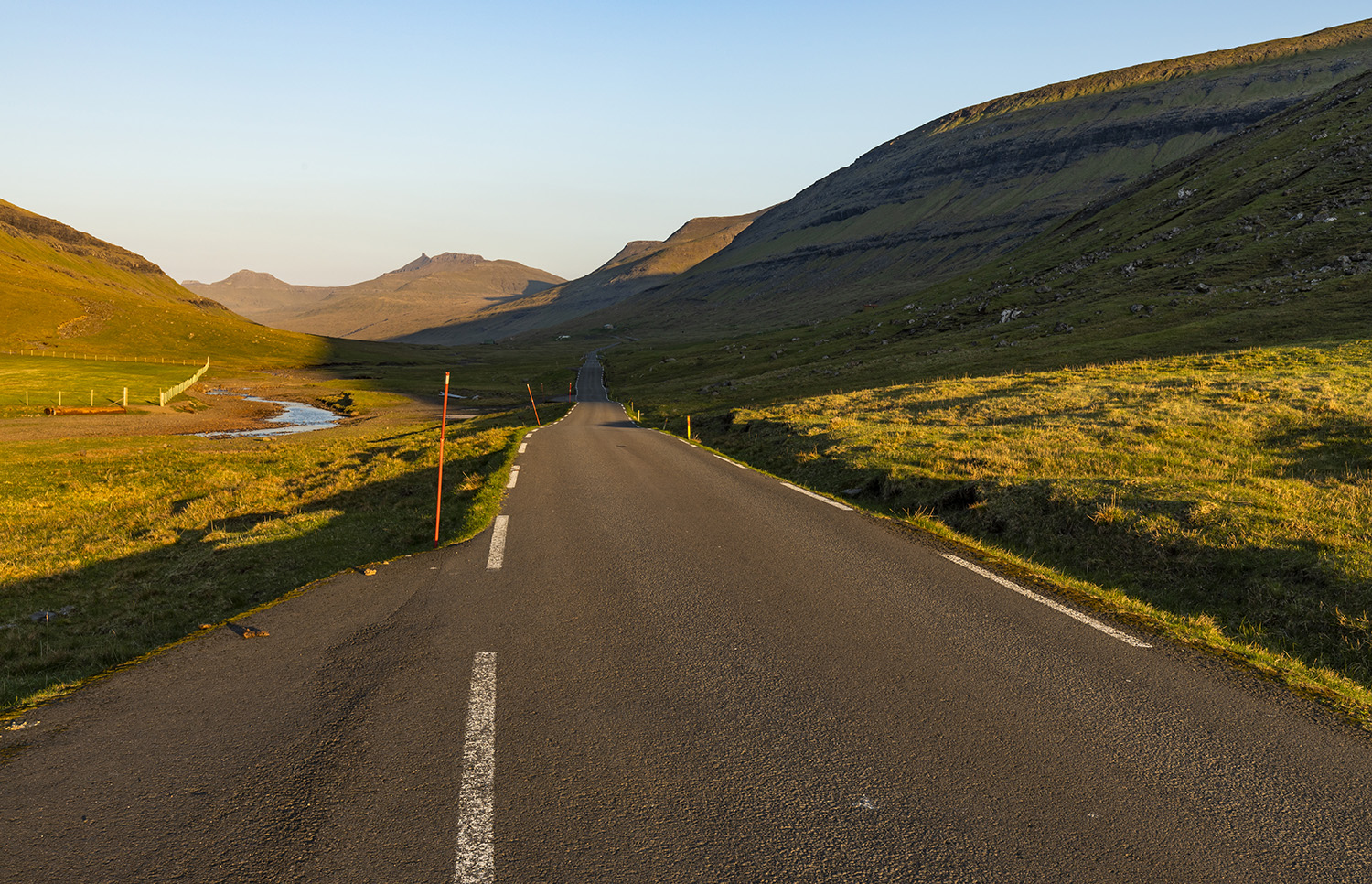 Where to Stay in Faroe Islands

If you are looking for solitude and silence (as I was) avoid Tórshavn. I stayed in a small cottage by the sea harbour on Vágar island, around 15 min from the airport, in a place called Kristjanshavn. Not the most luxurious place, but it had everything I needed and the location was actually really good to drive around! I visited Gasadalur (25 minute drive away) at sunset almost every evening!

I have read some comments related to angry people in Saksun, who are very rude to tourists, but, at least during the time that I was there, I haven't seen anything like that. And I was there twice! I am a "nice" tourist and I don't trespass private property and I respect the signs everywhere I go. If I had a house in the middle of the mountains I wouldn't like it either if people would violate my privacy and kept thinking that my house is some kind of touristic spot. Keep off private property and respect the privacy of the locals and no-one will be angry! If you have a drone, try to fly high to keep the noise to a minimum and avoid filming private houses! It might also help if you would fly at sunrise, when you are alone and you are not disturbing anyone else. People tend to get annoyed by drones flying above their heads...

I have actually experienced some really friendly locals, especially in Nólsoy, where a local going to check on his sheep also offered to be my "tour guide". I am usually quite paranoid and I am very skeptical towards such "offers", but in this case I have actually seen him talking to quite many locals already, so he looked alright. I live in the Finnish capital area, where people are rarely friendly, so this was quite unusual, but probably I would be eager to talk to tourists as well if I were living in such remote and beautiful area!

In Gjógv I also had a nice chat with one of the locals that was serving at a coffee shop. I was his only client at the time, so it was quite easy to start talking. When I came back from Nólsoy, I took the late ferry and there were a few drunken young locals which were asking me if I was one of "those" vegans (I am not a vegan :D ). They were saying that it would be nearly impossible for Faroese people to be vegan and then they were joking around "Have you seen any trees here? :D". I definitely get their point... all I saw growing there was grass and sheep. Anyway, I kept the conversation polite, but not too friendly and we all went our separate ways once we got to Tórshavn. In the end they were actually being friendly and nice, even if I was skeptical.

Another encounter with a local that I had was on Mykines island with my very friendly bird tour guide. He was even saying that most of the people leaving on this island let tourists sleep in their houses when the ferries get cancelled (which happens a lot..). I even encountered the same person in Torshavn by accident and he stopped to say "Hi".

In conclusion the Faroese people were very friendly and welcoming, a lot friendlier than I would have imagine them to be!

Other Tourists in Faroe Islands

First of all, I have visited Faroe Islands a bit off season. End of May is probably not as touristic as July, so I got to spend most of my time by myself. While driving off the big road, there was rarely any car and when hiking you could walk for 2 km straight without encountering anyone. Most of the tourists here were photographers, so I actually encountered the same people several times in different places. There were a lot of solo travellers like me and I haven't really engaged in any conversation, except nodding my head and maybe a few words about some other place we visited. I actually came here to get away from people, so this was the perfect amount of interaction for me!

The Nature in Faroe Islands

The landscape is simply breathtaking and you could easily wonder around and be by yourself for quite some time. The nature has to be respected and nothing is worth risking your life! Be careful when you hike, don't get too close to the edges, wear proper hiking gear, use common sense and you'll be just fine.

I thought the whole experience of travelling alone for the first time and not really talking with people would be very weird and I would feel really lonely. Turns out the time passed so fast, I couldn't even believe that I was already on my flight back home. The whole experience was inspirational, I found out that being alone is not a bad thing and I actually enjoyed it very much!

Faroe Islands was the best country for a female solo traveller and photographer, I felt very safe and at ease here and I am longing to go back!

One of the last places in Europe that offers unspoiled and wild nature! This is a photographer's dream!