Scotland is famous for its beautiful nature and isles and this one day tour from Oban is perfect to explore gorgeous landscapes, the unique rock formations on the island of Staffa, the puffins on Lunga island and the "post card perfect" harbor in Tobermory, on the Isle of Mull. This one day trip is great for wildlife and landscape photography!

At the end of July 2018 we stayed for 4 days in Oban and we booked a 12h tour including Tobermory, Staffa and Treshnish Isles from Staffa Tours, with departure from Oban at 07:30 in the morning. For me this was the highlight of my one week visit in Scotland and I absolutely loved it! Despite the fact that half of the trip is travelling to reach the islands, this tour was totally worth it!

We left early in the morning from Oban by a big boat towards Craignure, Isle of Mull and we got to enjoy a lovely sunrise, with the sun rays shining through the clouds. The whole 50 minutes boat ride is very enjoyable and the landscape is breathtaking! I don't know if there are such days without clouds in Scotland, but in this case the clouds made it look especially nice! 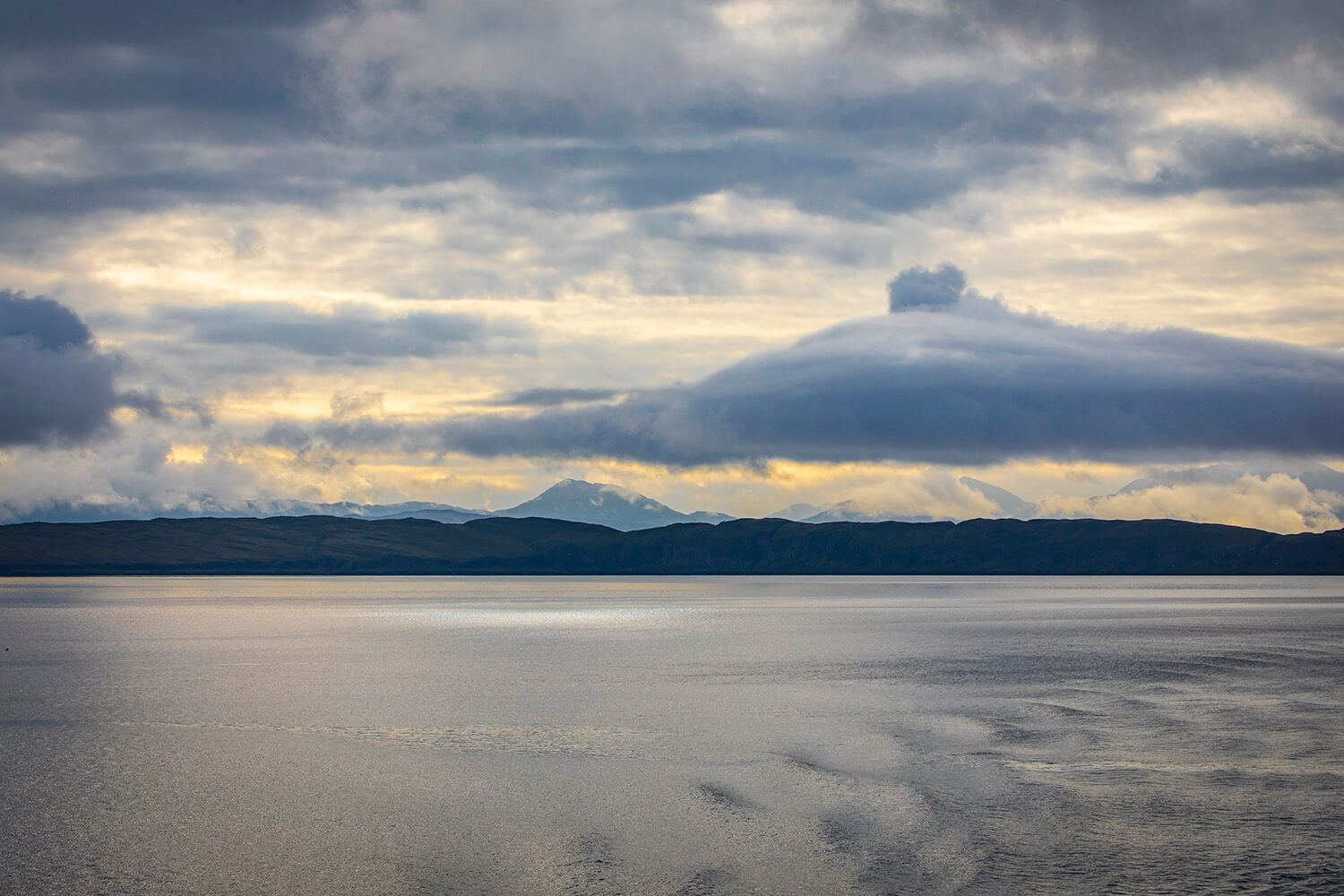 After arriving to Craignure there was a bus that was waiting for us and it took about 1.5h to drive to the other side of Isle of Mull, in Tobermory. This little harbor actually looks like "post card perfect", but at this point we didn't have so much time to enjoy it. We had about 2 hours to spend in Tobermory when we arrived from the other islands. 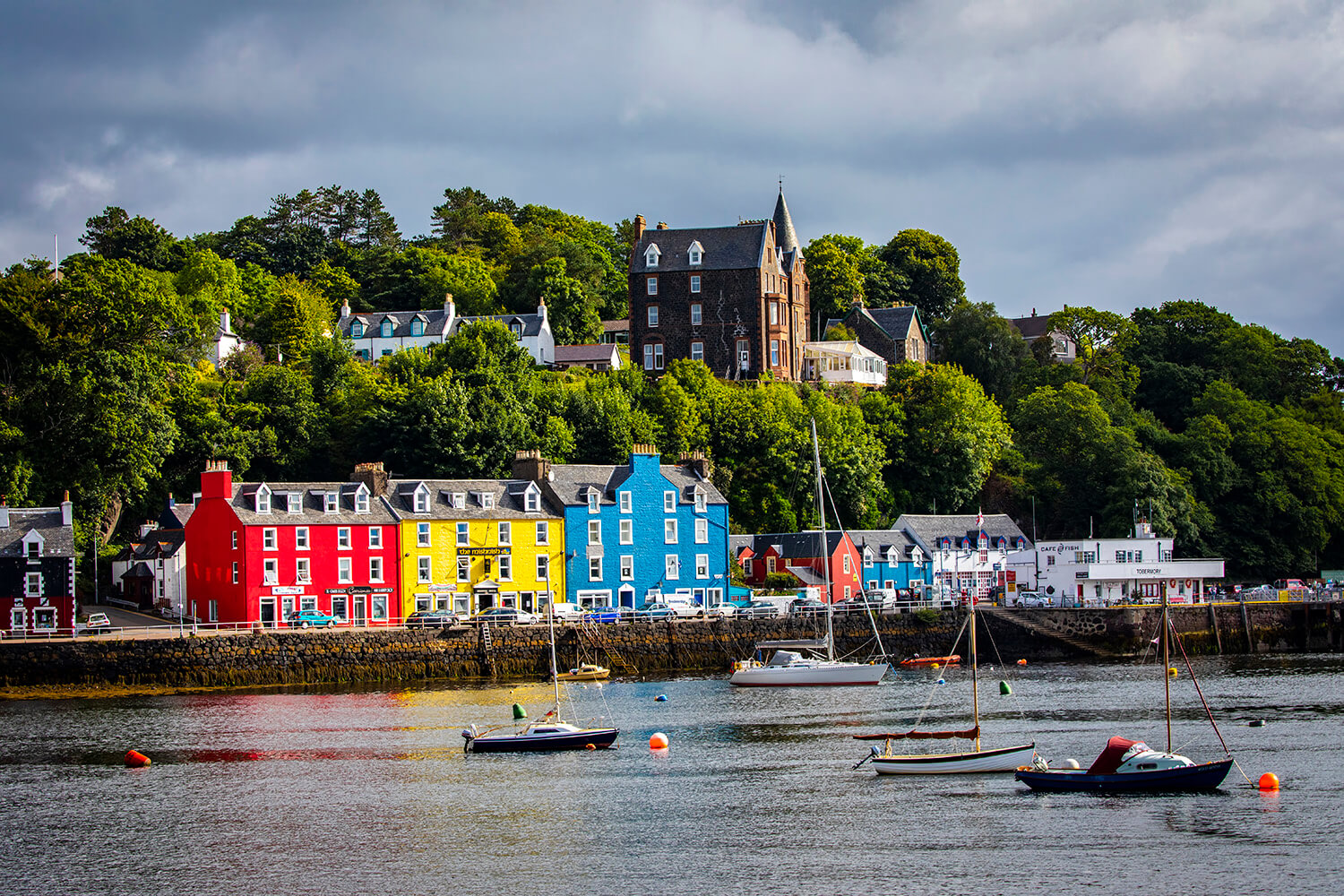 We embarked on a smaller boat and headed towards Staffa island. It was quite a long ride (I think around 2 hours), but we still got to enjoy the amazing landscapes and from time to time some dolphins as well. Unfortunately I couldn't get a good picture of the dolphins, but they were jumping around the boat.

When we finally arrived on Staffa island we had about an hour to explore the weird formations on the island and a bit of Fingal's Cave. The island looks like it was especially carved in such a way and it feels like walking on stairs. The "stairs" are actually basalt columns that were formed from lava flow, as it cooled down. The columns typically have three to eight sides, six being most common. The columns are also divided horizontally by cross joints. 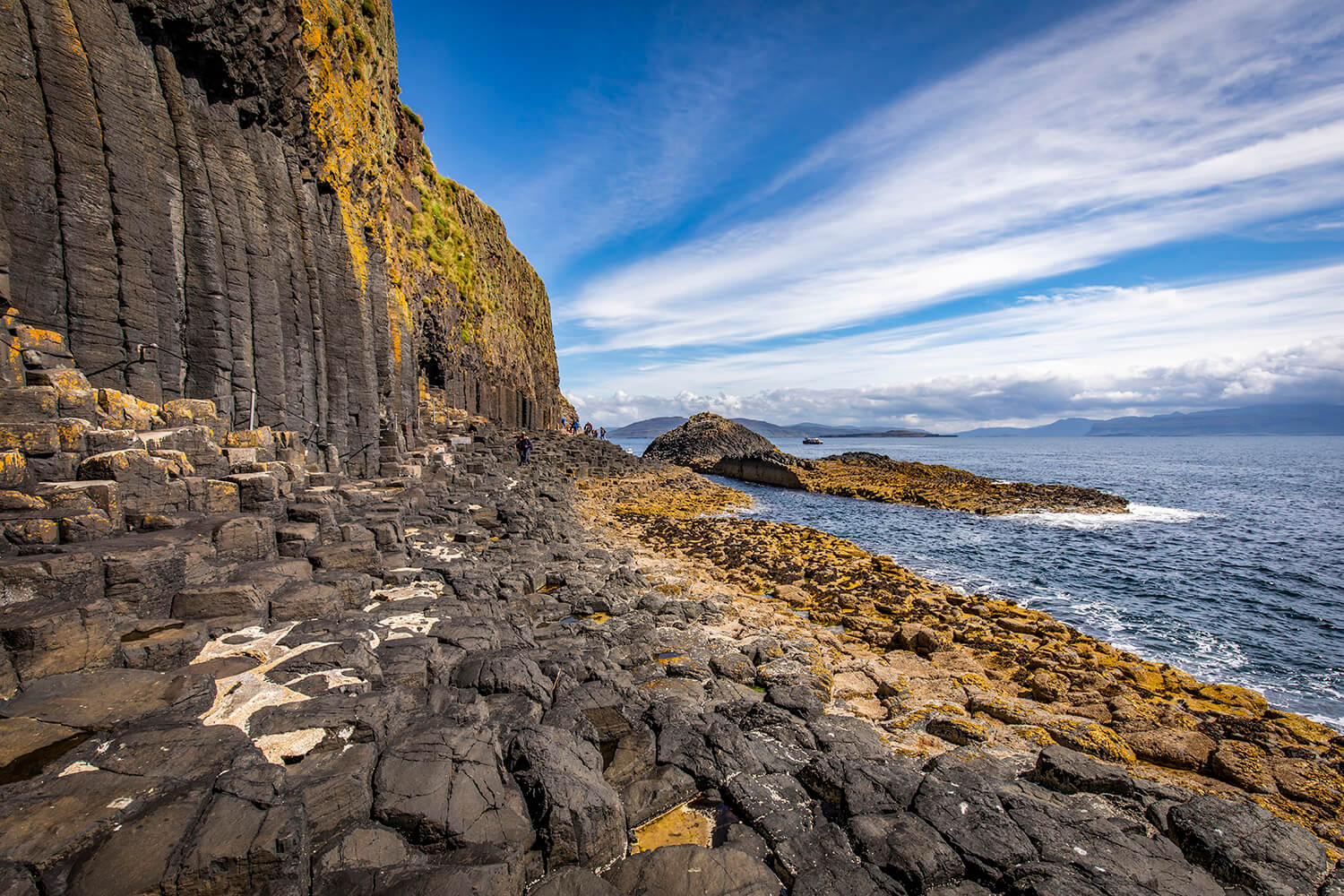 There are puffins, guillemots, shags, black legged kittiwakes and gulls living on Staffa. You'll notice the shags right away when the boat arrives. 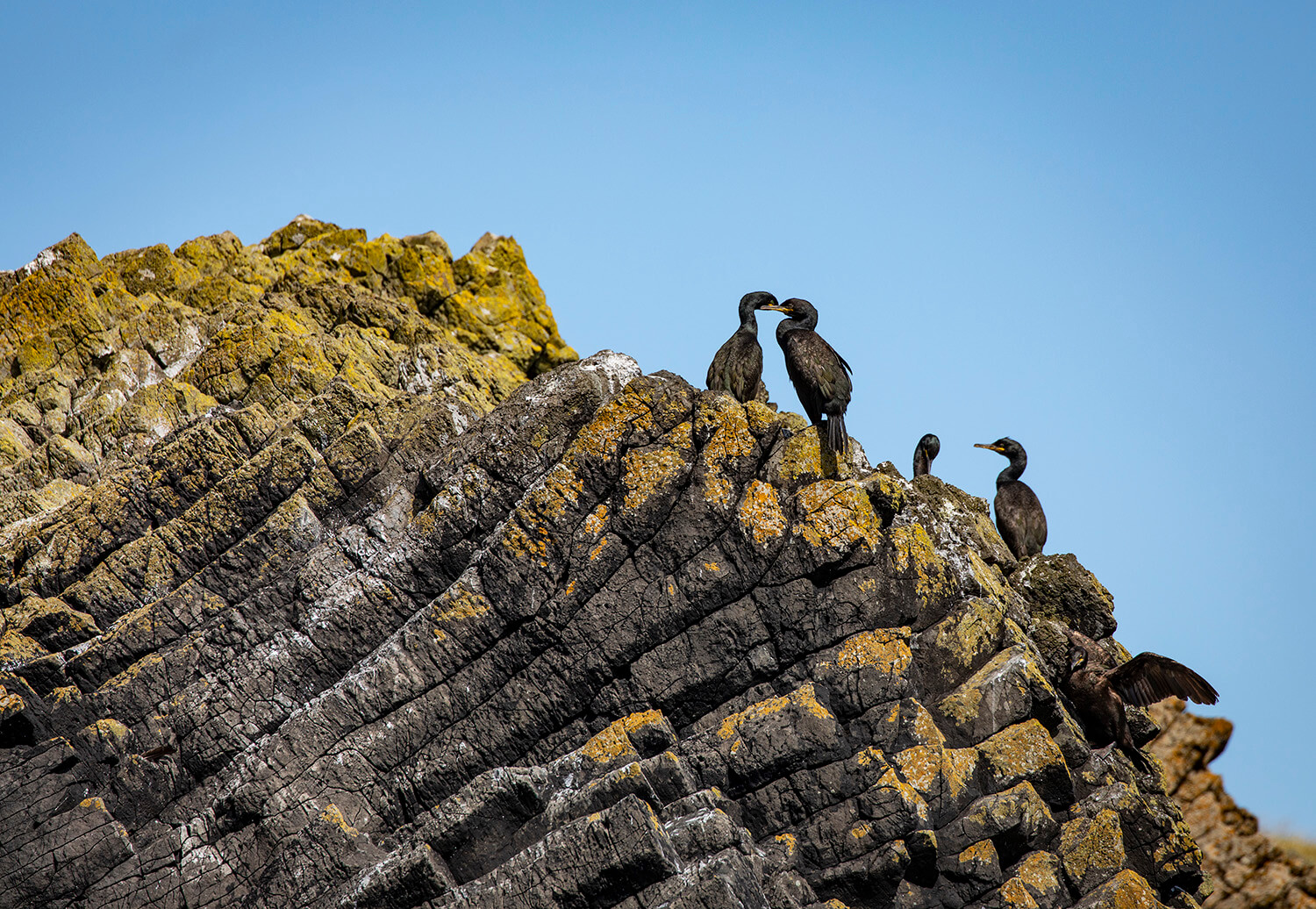 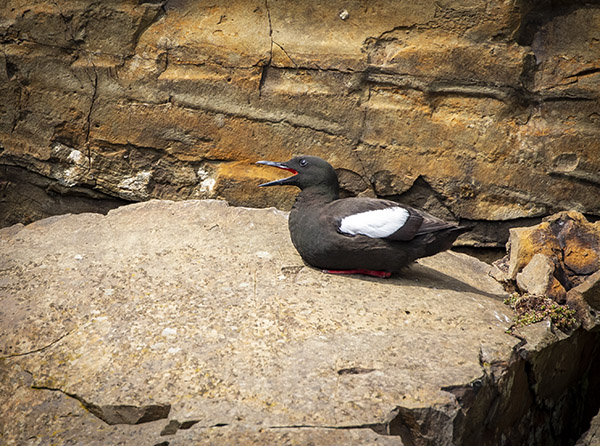 Staffa is an extraordinary island and only a few other islands in the same region share its unique appearance. One of the most famous ones is Giant's Causeway in Northern Ireland. 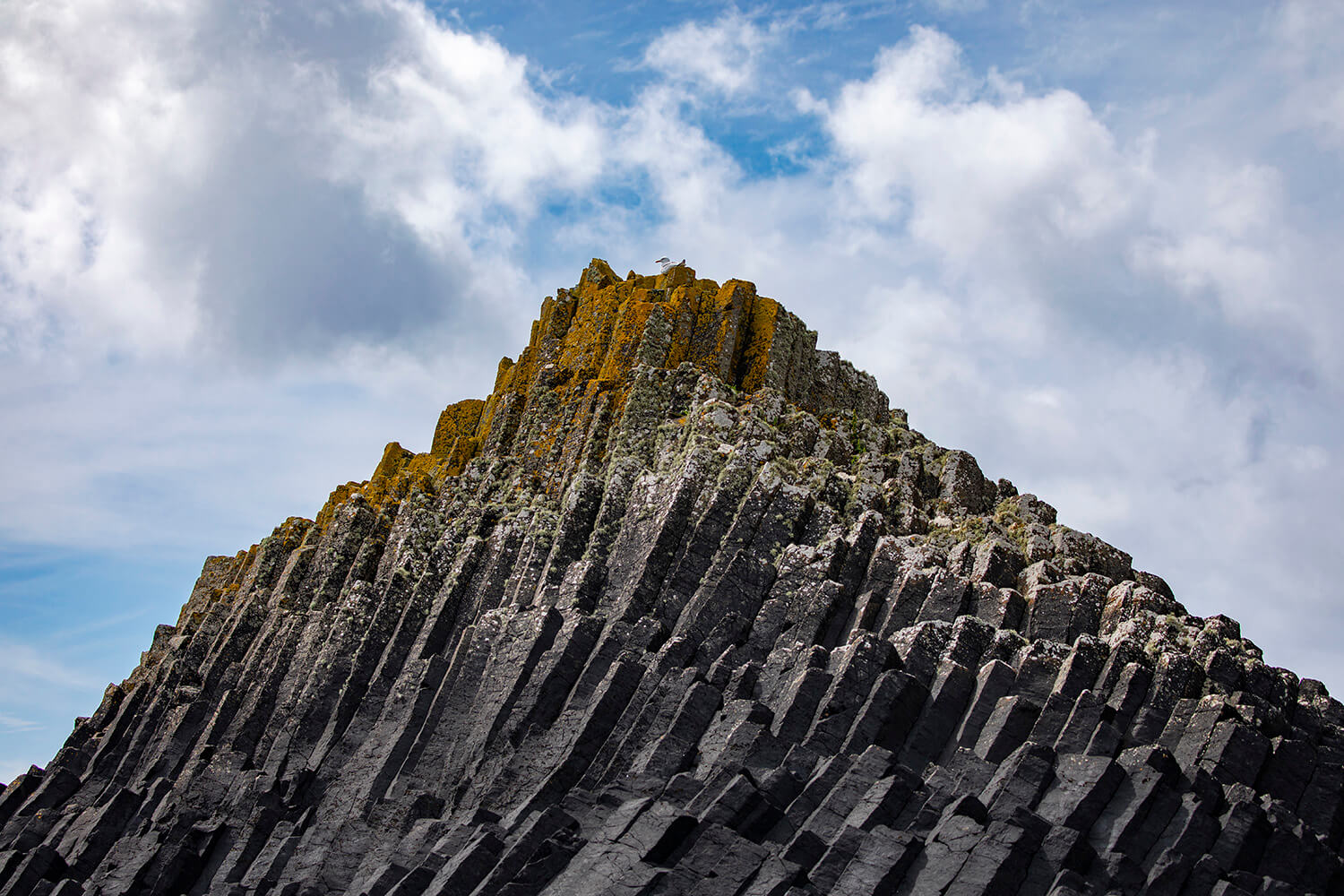 Before we left, the boat took a short tour close to Fingal's Cave, but it was a bit wavy, so we couldn't get too close.

After about 30 - 40 min we arrived at Lunga Island, one of the Treshnish Isles. You could already spot puffins in the water just a bit before arriving. After a short hike we encountered the first puffin colony. We were told that if we go forward we will get to an even bigger colony of puffins, however the hike there seemed a bit treacherous, since it was muddy and slippery, so we decided to stay and admire the first colony. We had 2 hours to spent on Lunga island with the puffins.

These birds are really special with their funny looking beak and small tail. They don't fear people at all, so you could just stay right next to them and they don't mind at all. I have thousands of pictures of puffins from Lunga Island, but what I was really after was to take a photo of a puffin with fish in its beak. After one hour of missed opportunities, I turn around and I see a crowd of people taking pictures. After approaching I see that there is a puffin with a beak full of small fish, so I lay on the ground and take a few pictures. After a few minutes the crowd retreats and lets the puffin go to its burrow. I was quite lucky to catch such a moment, since in those 2 hours this one was the only puffin with such a "mouth-full". 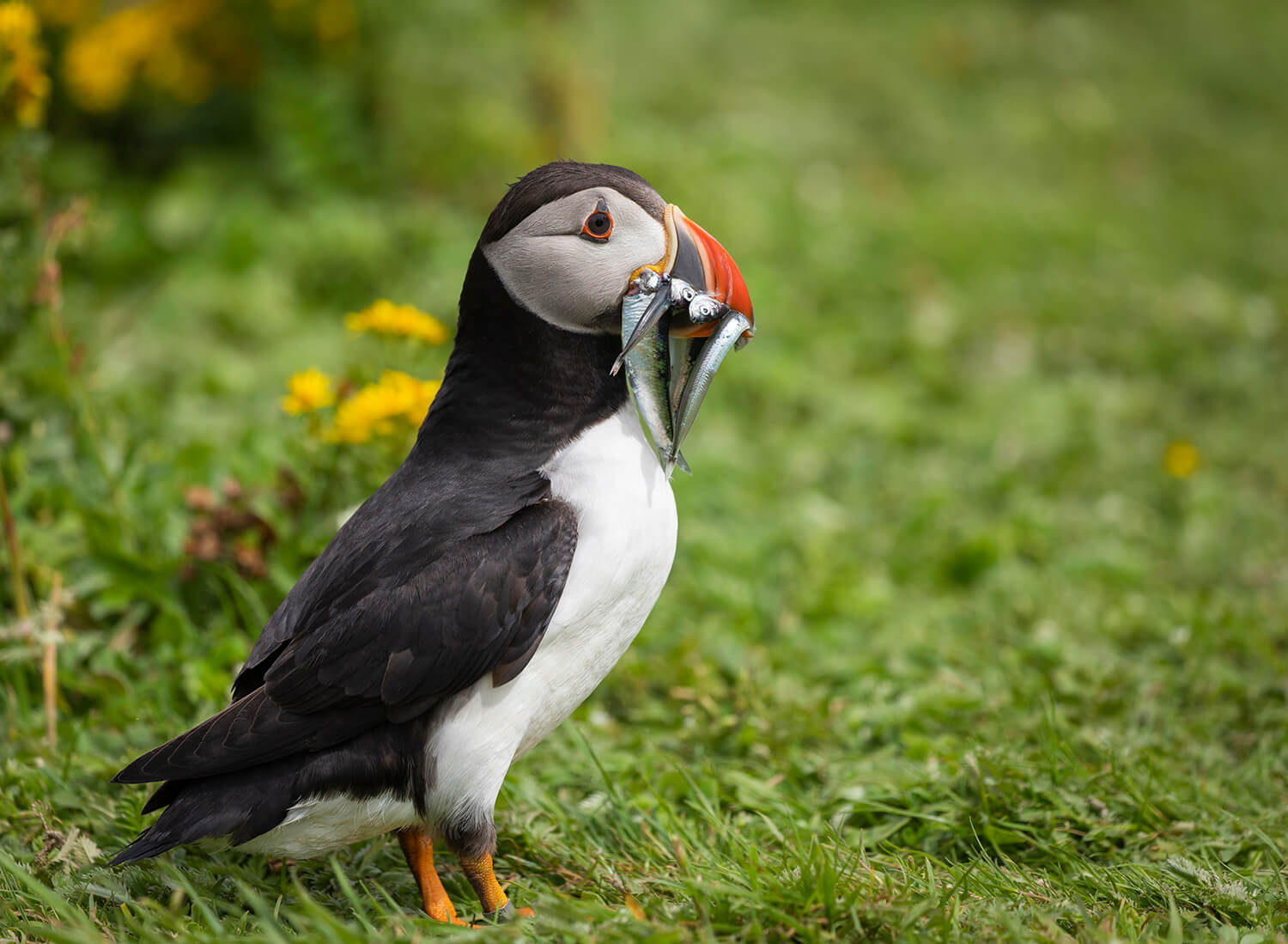 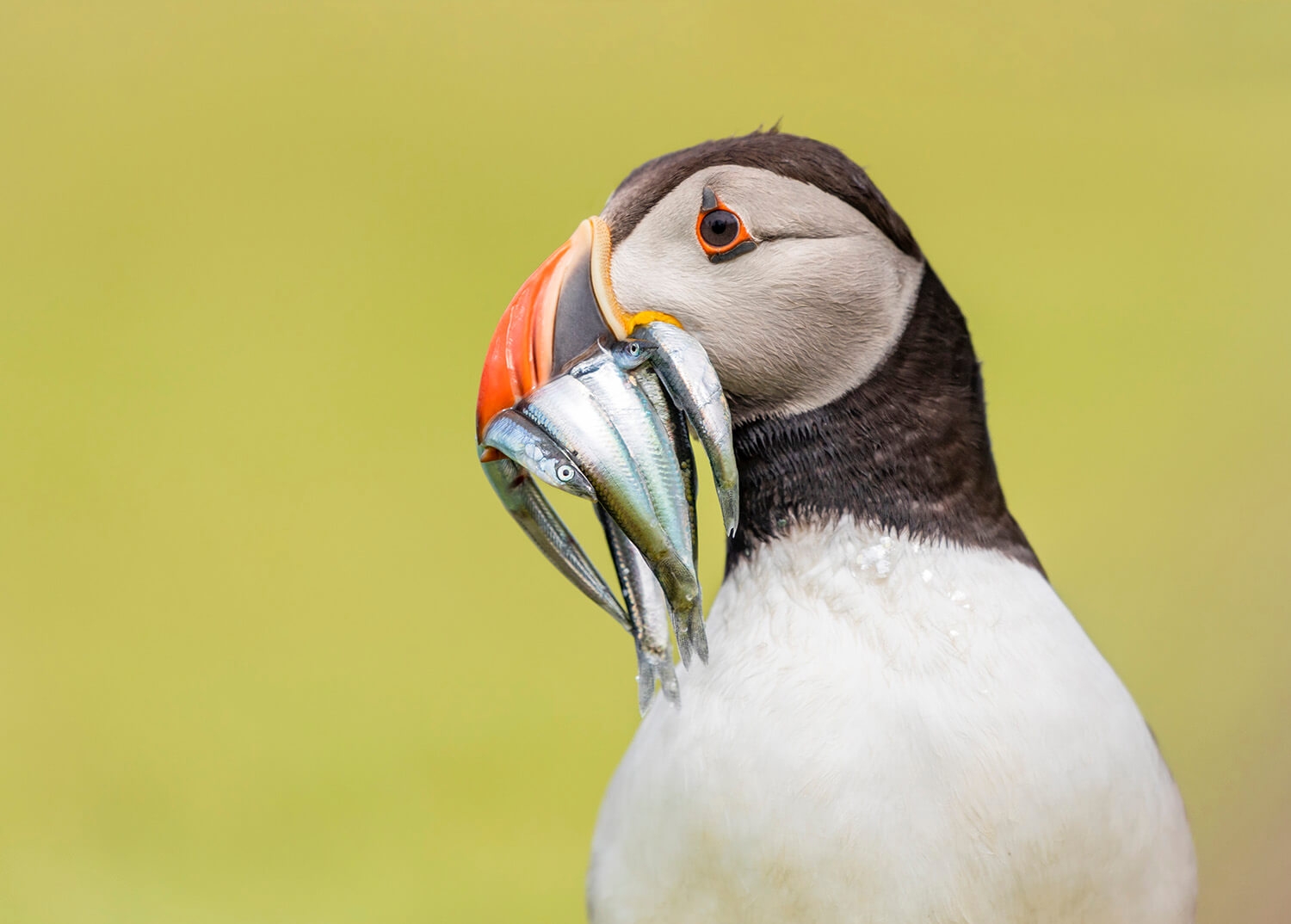 Sometimes it seems like fights occur and while 2 puffins are fighting, the other ones just gather to watch. Maybe they are even cheering for a winner in their own language :) 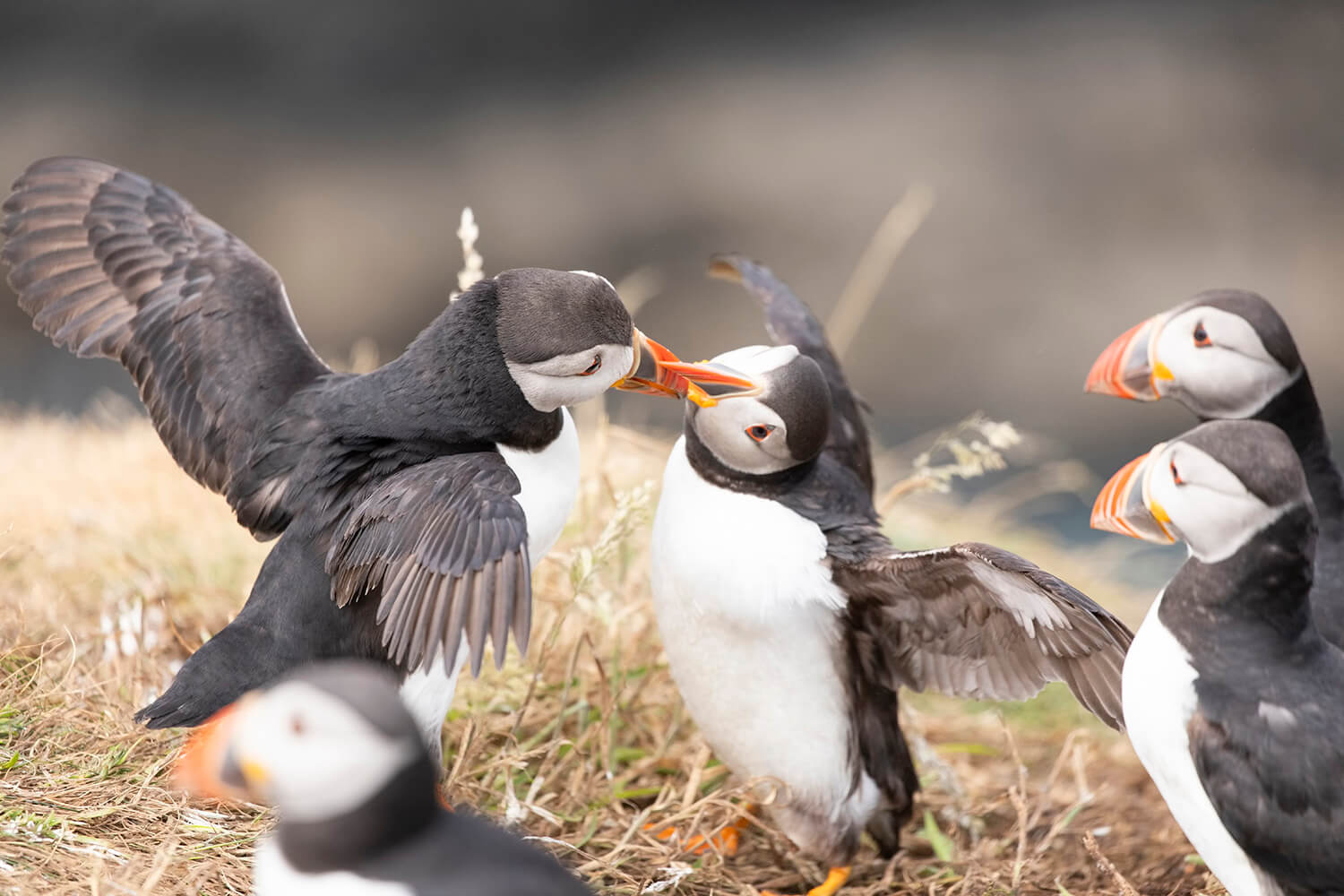 These 2 hours next to the puffins went by really fast and it was a really amazing experience! The puffins are leaving in August, so the best months to see them is late May, June and July. 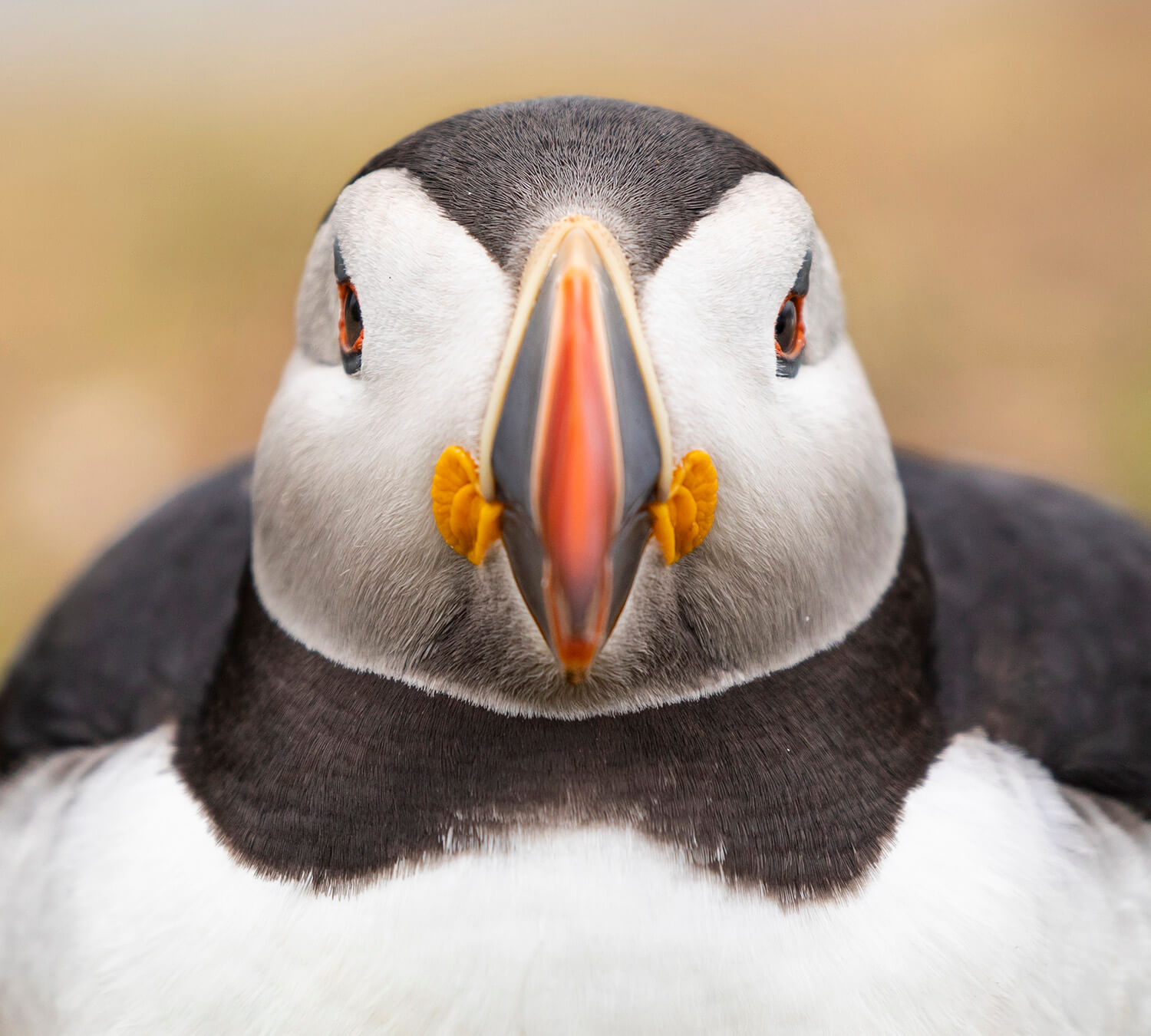 On the way back it started to rain and the trip felt longer, however, by the time we got back to Tobermory the sun was shining again.

We got to spent another 2 hours in Tobermory, so I got my "post-card" picture and we ate something in the harbor restaurant. 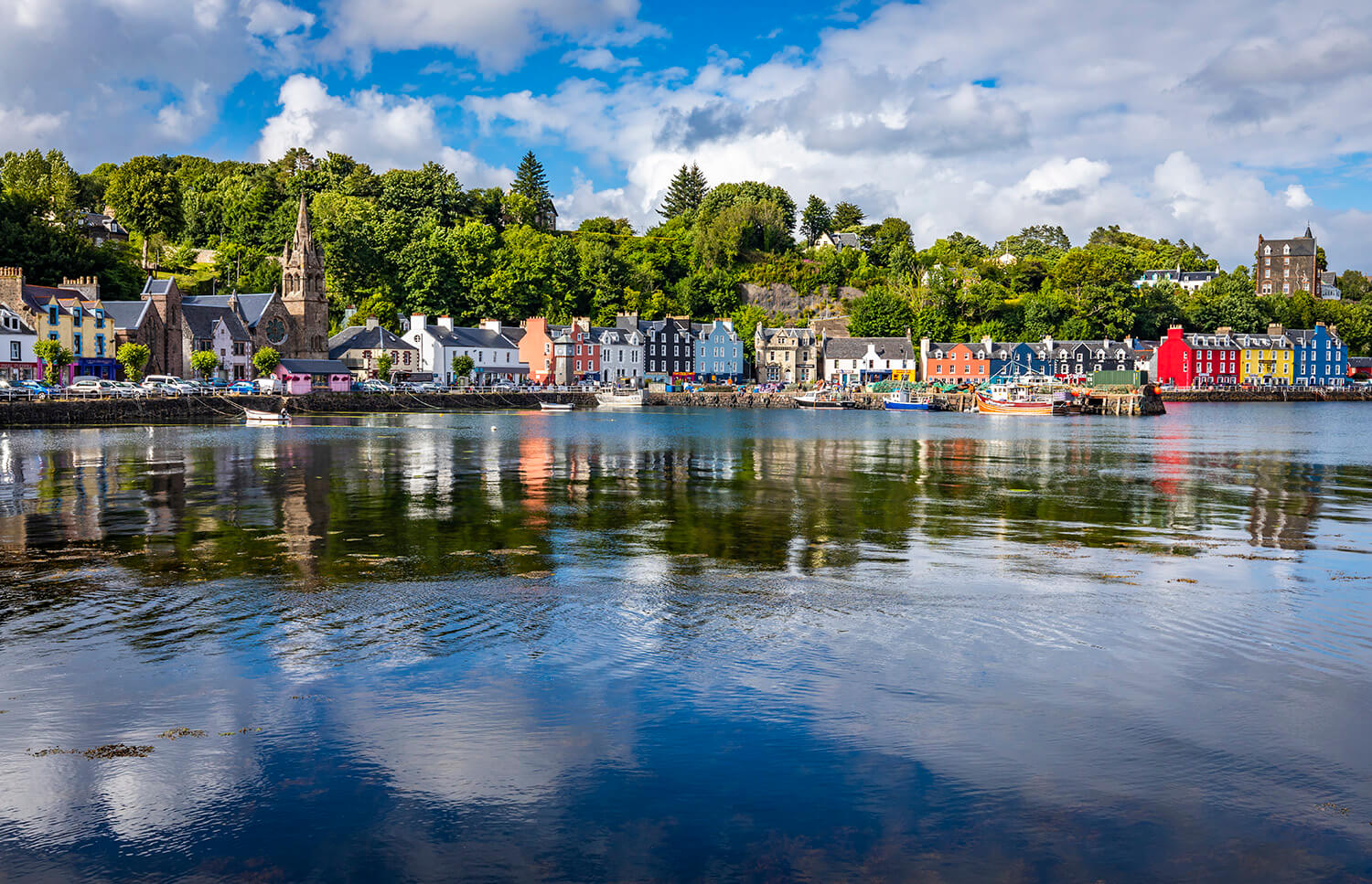 On our way back we saw some deer in the distance and the bus driver was kind to stop the bus. In the middle of Isle of Mull our bus broke, so we had a few minutes to wait for another bus and admire the scenery on Isle of Mull. 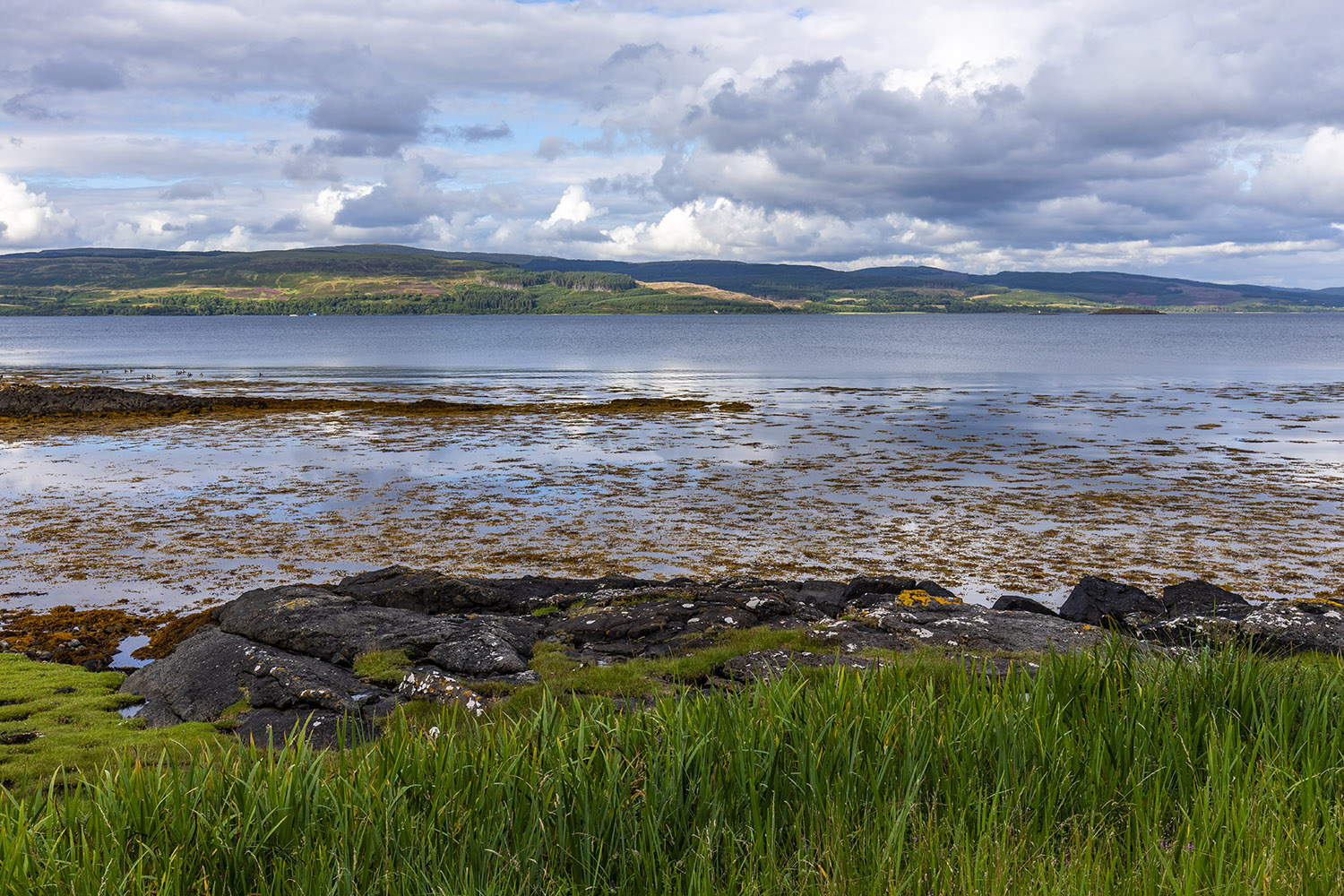 On the way back to Oban we got to see beautiful rays of sun through the clouds (again :) ), with gorgeous scenery of mountains and hills.

When we arrived to Oban the sun was nicely illuminating the buildings of the city, while dark clouds were lurking in the background. 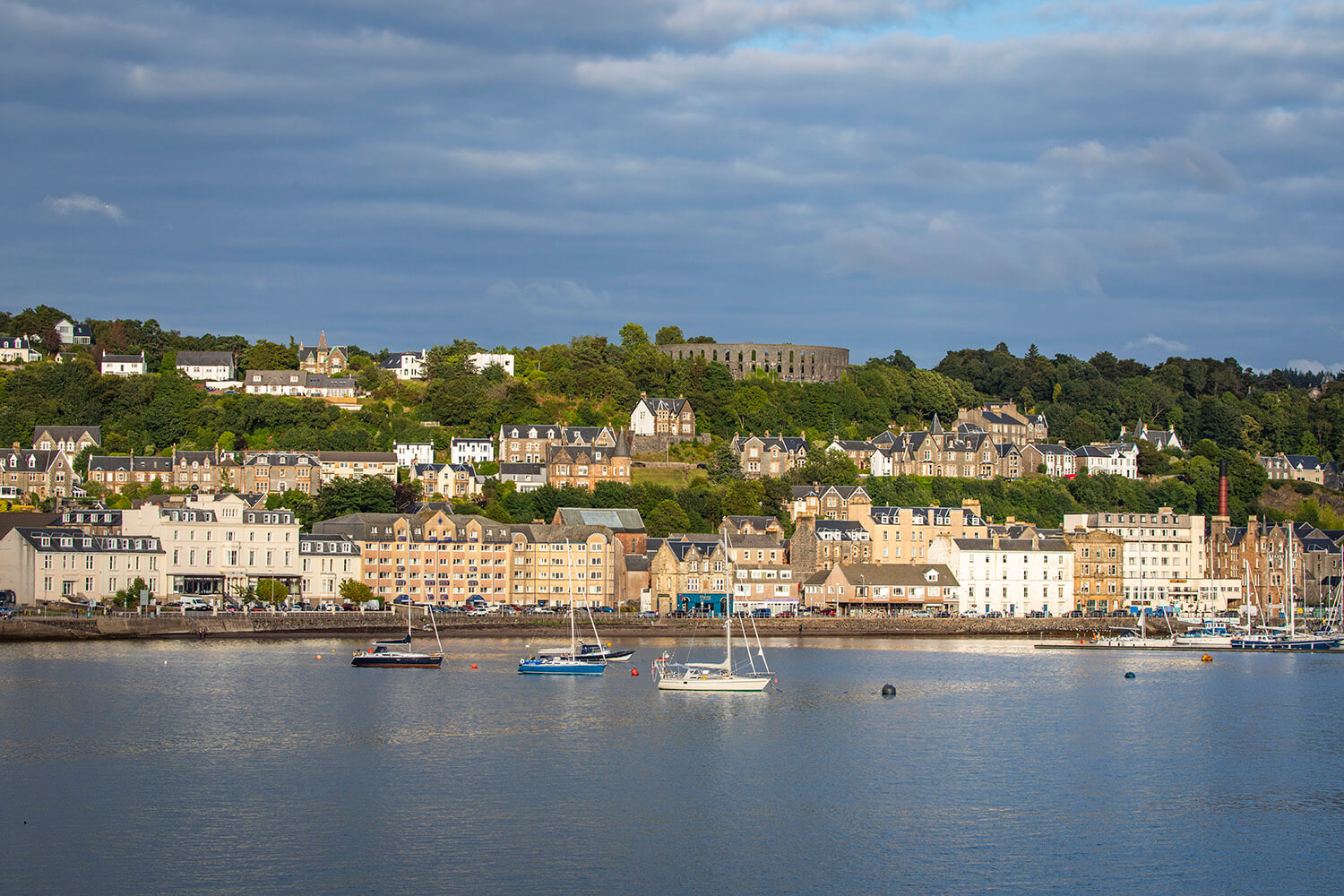 This was an extraordinary experience and I highly recommend this to anyone who likes landscapes and birds!

In order to enjoy this as much as possible, you should take windproof and waterproof clothing with you and some food and water. We didn't get any food before late evening when we arrived to Tobermory, so lunch is not included. Weather is unpredictable in Scotland, so it can start raining at any time. Layers are recommended, since one moment it can be cold and windy and the next it can be quite warm, with the sun shining brightly!

Wild Scotland: Best places to photograph from Edinburgh to Oban

Wild Scotland: Best places to photograph around Oban and Glencoe

If you don't have time to make it all the way to the highlands of Scotland, Oban is closer to Edinburgh and it provides stunning views and Glencoe represents the beginning of the famous highlands in Scotland. Oban and Glecoe are awesome for landscape photography!

Italy is one of the most beautiful places in Europe and it's really popular among tourists! With its beautiful Dolomites and Lake Garda, Italy is also a top place to go for many landscape photographers.