As a wildlife photographer, bears are a great subject to photograph, however it can be dangerous to approach a bear in the wild. Finland has lots of places that offer all sorts of photography hides, especially bear photography hides. Most of them are in Kuhmo area and I had the opportunity to visit Wildlife Safari Finland in June 2018.

I had such a great experience last year in the Wild Brown Bear Center bear hides and I wanted to try it again, this time in a different place and maybe try to photograph other animals as well.

I have learned that Lasse Rautiainen was the first person in Finland to own bear photography hides and he seems to have started this trend. This was the only place that I could find that has the possibility to photograph wolves and bears, so I decided to try it out!

The bear hides are in the same area as Wild Brown Bear center hides, but the difference is that you can also see wolves. If you're lucky even wolverines (I wasn't :))!

​The bear hide that was assigned to us was located in no man's land between Finland and Russia and it was overlooking a beautiful grass, swamp and forest setting, which is a common landscape in that part of Finland. We visited the hide during midsummer, at the end of June, so there were quite many pretty white flowers on the ground that added a little extra to the pictures. 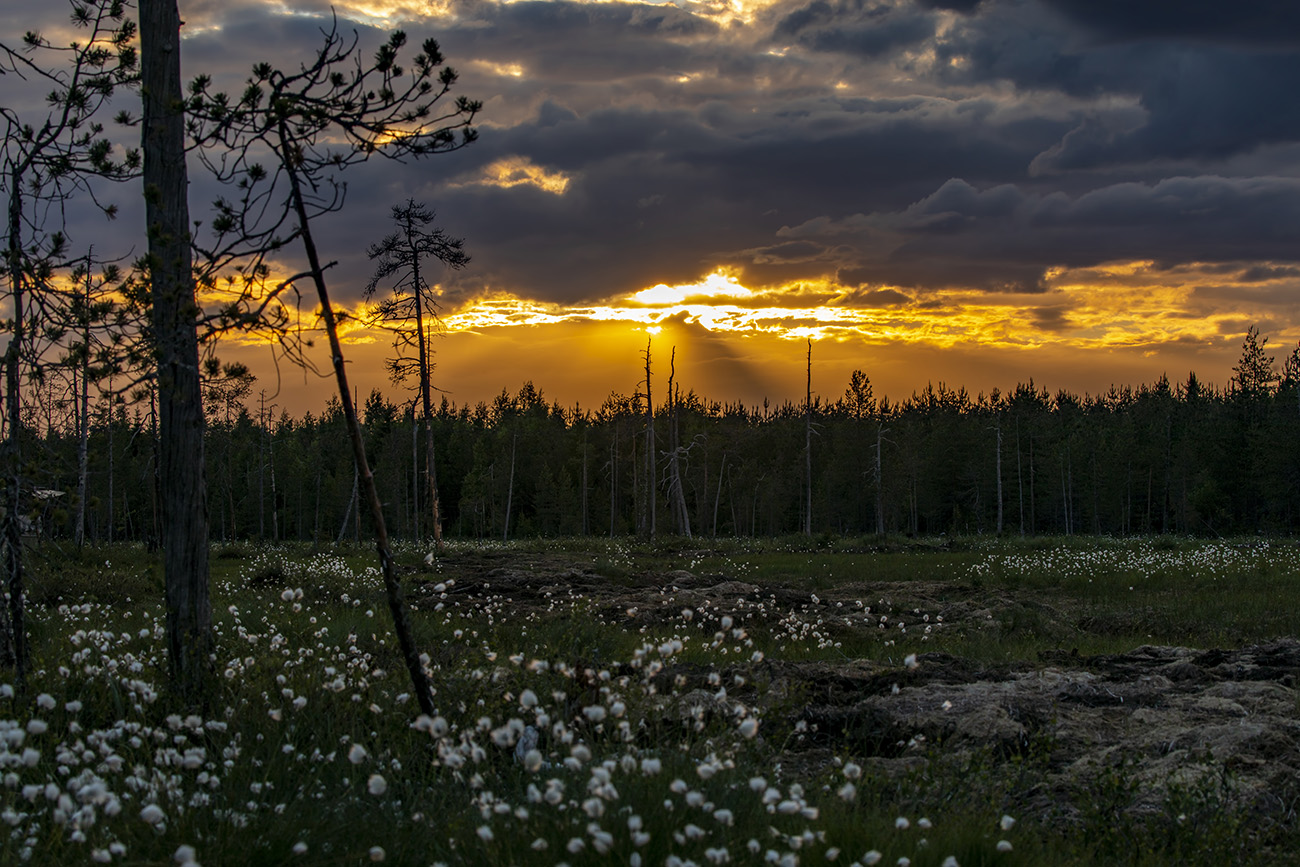 There was a van that drove all of us to the hides and it also picked us up the next morning. The hides were located about 10-15 minutes drive from the main cottage. I had already experienced the hides at Wild Brown Center, so I pretty much knew what I was getting myself into :). We were only two people, so we got the smallest hide, which was not in the same condition as I would have hoped. The toilet was actually outside the hide, so every time we went to the toilet we really had to make sure that there are no bears lurking around during that time. I didn't like this part very much, but we were there to see and photograph bears and wolves! Mostly wolves!

We noticed that there are two carcasses tied up to the trees to lure the animals to come and feed. Ravens were all the time at the scene feeding of the carcasses, together with seagulls. 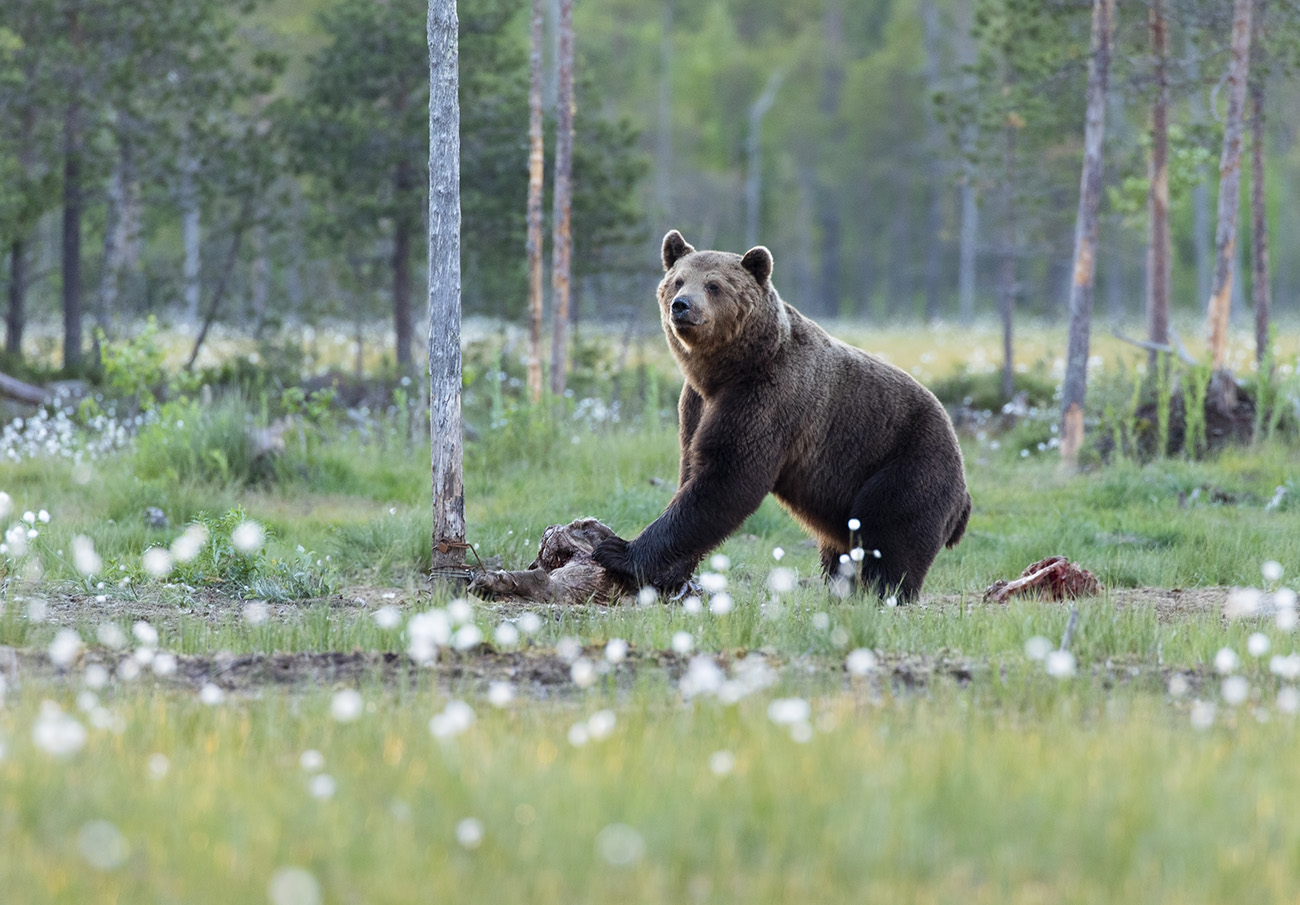 We only saw male bears (many bears) out of which two were very big. There were bears almost all the time eating the carcasses, so you will definitely see them! However, I chose this hide mostly to see the wolves and it looks like they don't come to feed every night. There were people that were in the hides for one week and saw them only three times. Unfortunately for me, I didn't get to see any wolves during my one night stay. This was not a surprise as these are wild animals and they do as they please, so I knew already that there is a chance I won't see them.

The carcasses were quite far from the hides, so my 400 mm lens was not enough to get close up pictures of the bears. I had a Canon 5D Mark IV and a Canon 7D Mark II and while there was still light I had to use the cropped sensor camera to get "closer" and in my opinion it was still not enough. Most likely a 600 mm lens + extender (if you use a full frame camera) would have been good to have.

Nevertheless the setting was nice and even though I couldn't get closeups I still got nice pictures. I even got some sunshine for a while! My luck with the sun didn't last and almost the whole night it was dark and rainy (just like last time).

Some of the males had visible scars from fighting with other males, like the one below. He was missing one eye and part of his ear. Life can be tough also for male bears! 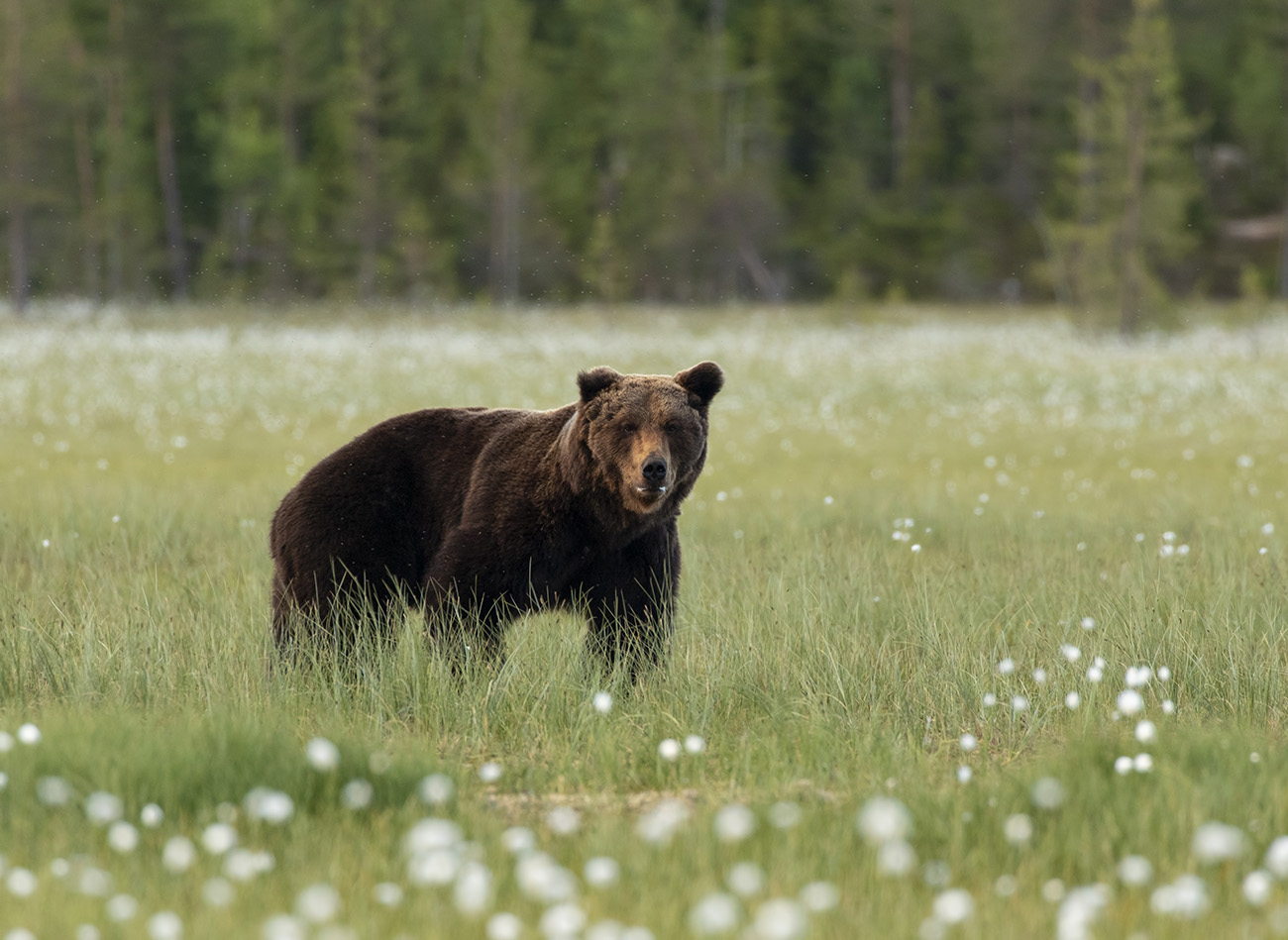 ​Other males were normal males that came to feed throughout the night.

Just when we thought we established who was the dominant male in the area, an even bigger male arrives at the scene. Suddenly the smaller male starts running straight towards our hide and the bigger male is chasing him! Now I understand why they always say in the documentaries that it's impossible to outrun a bear. These things are fast!! In a couple of moments they were from far away to a couple of inches from us! My heart started pounding and I was a bit scared that they will hit the hide in their running frenzy, but I kept shooting the action. It was dark, so maybe these aren't the best quality images, but it was still the most amazing moment and I think I managed to capture the essence.

Big male makes an entrance and he doesn't look happy 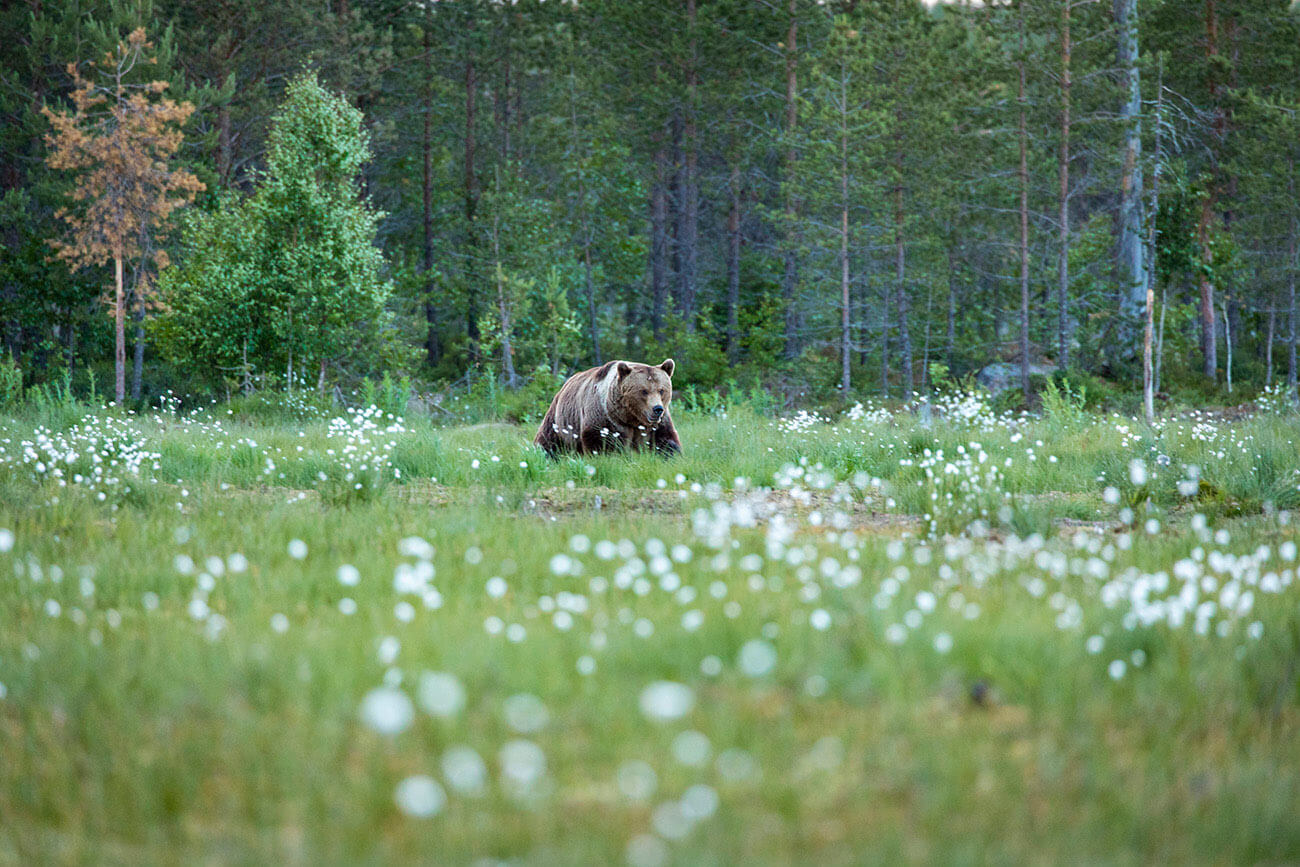 ​The other male bear starts running 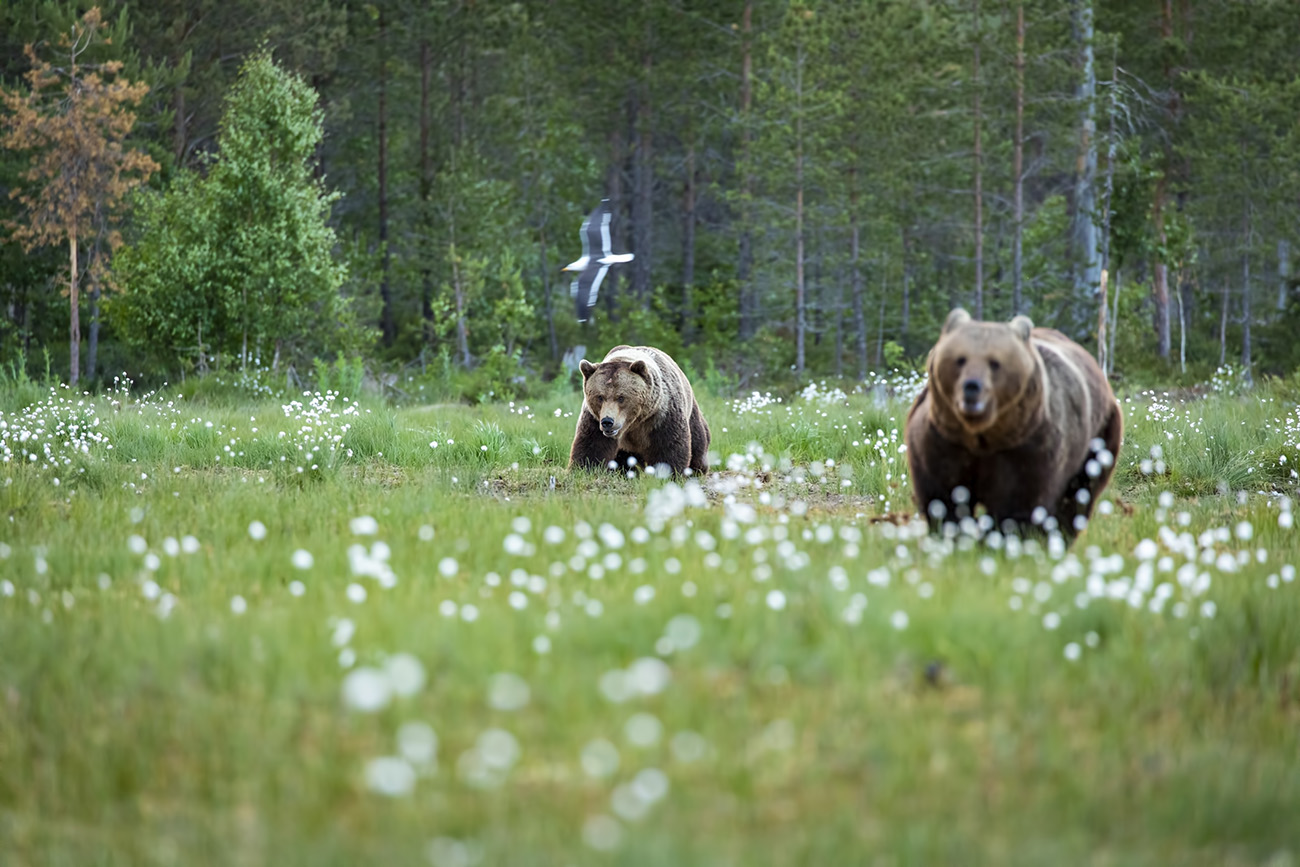 The big male starts to chase the other male 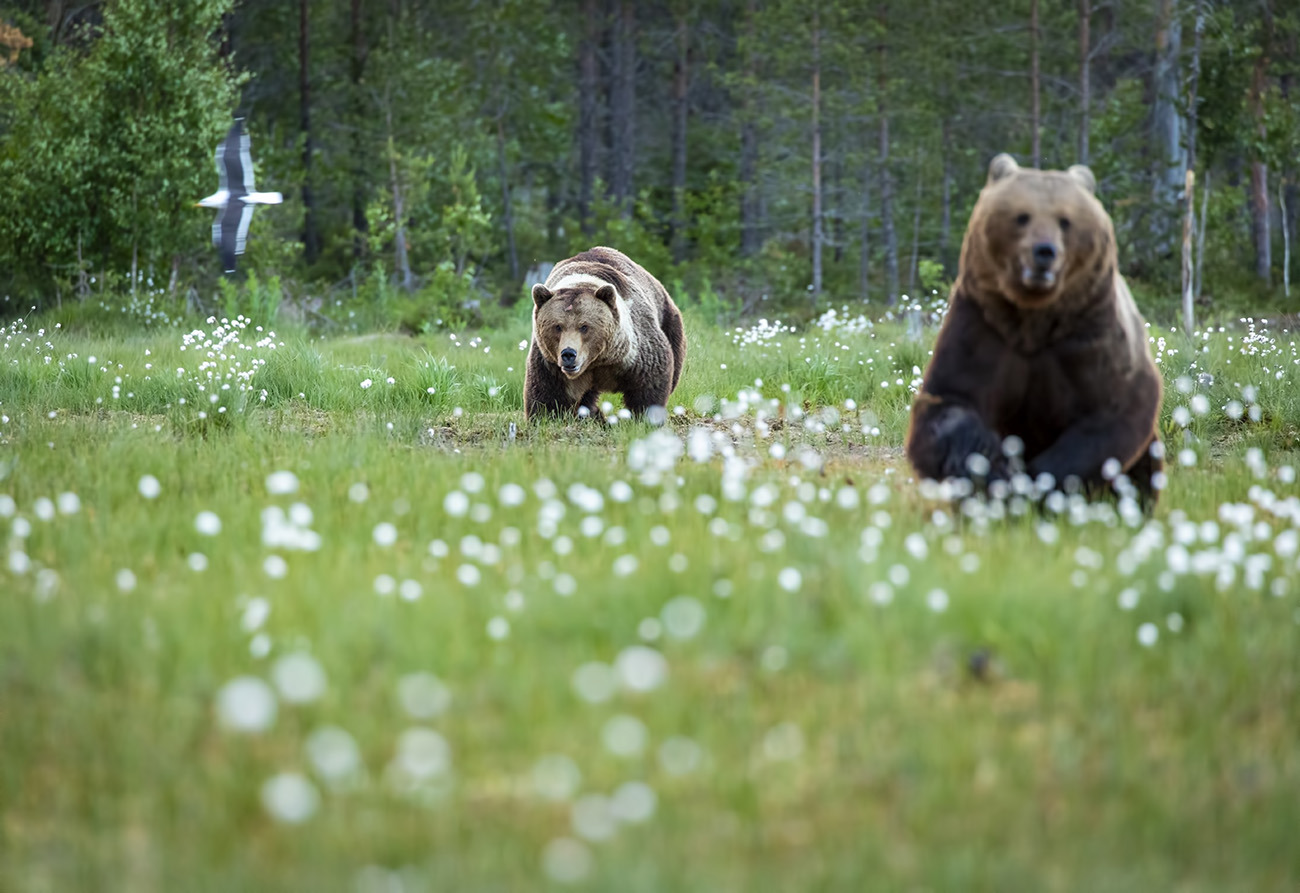 One male passes by our hide. He is really really close! 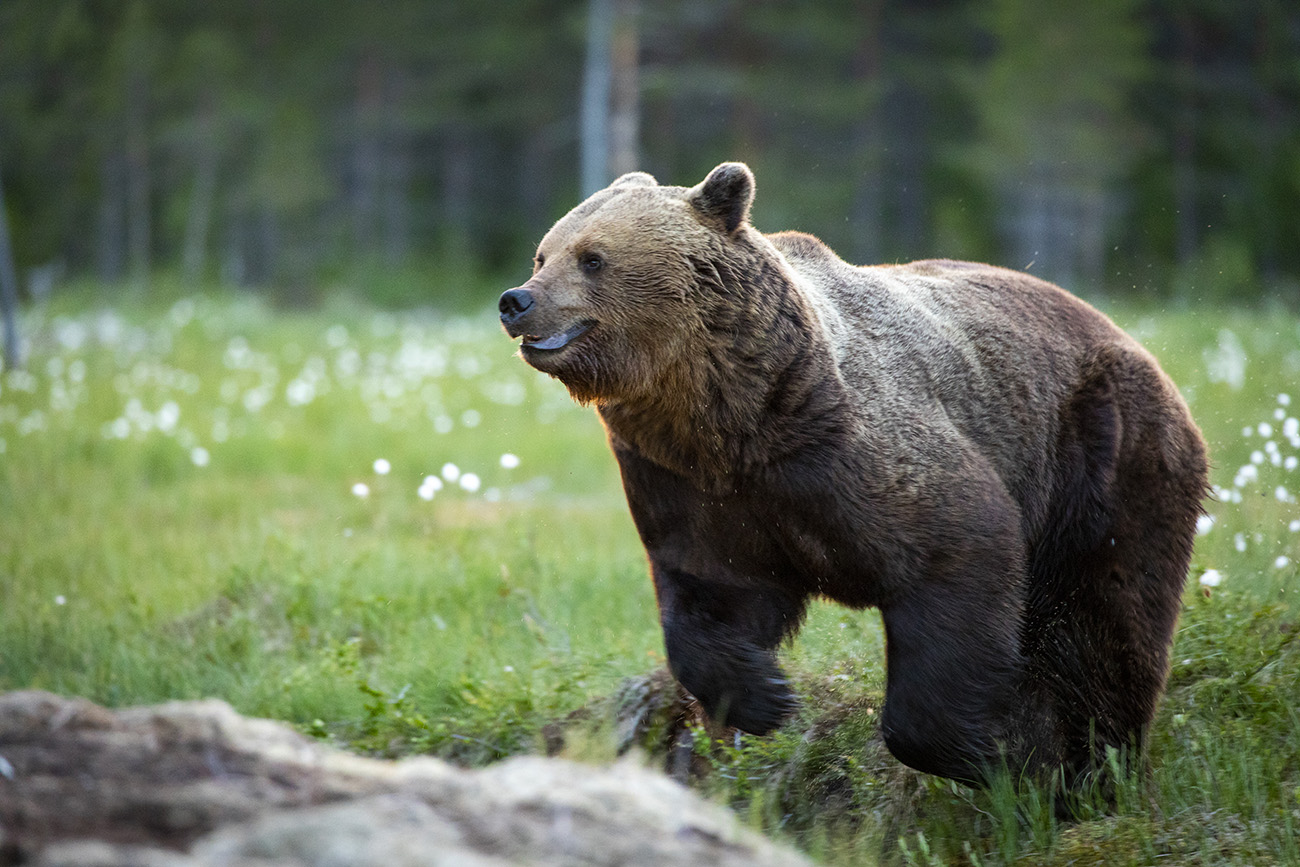 The other male also gets closer to hide. It stops for a moment and then it continues the chase.

After he makes sure that his rival is gone, he comes back to enjoy his meal with a couple of seagulls. There was another bear that wanted a share of the carcass (see in the picture below), but he didn't dare to approach closer. 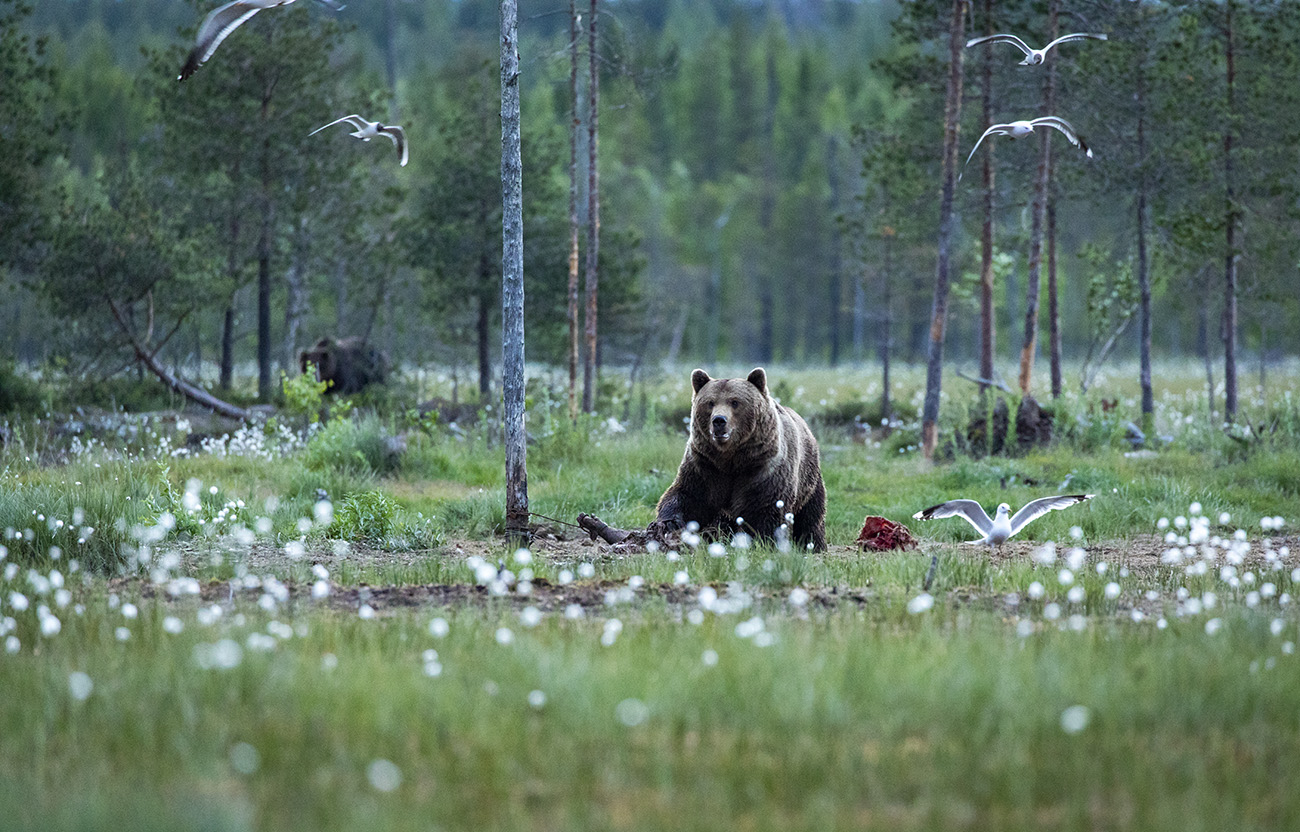 Imagine that after all of this we had to go to toilet outside :)

After a while I went to sleep, but I kept waking up every hour or so, hoping that the wolves might show up. In total I think I slept around 3-4 hours. I completely woke up around 5 and saw more bears.

In the morning I also saw a white tailed eagle that was chased away by the gulls. 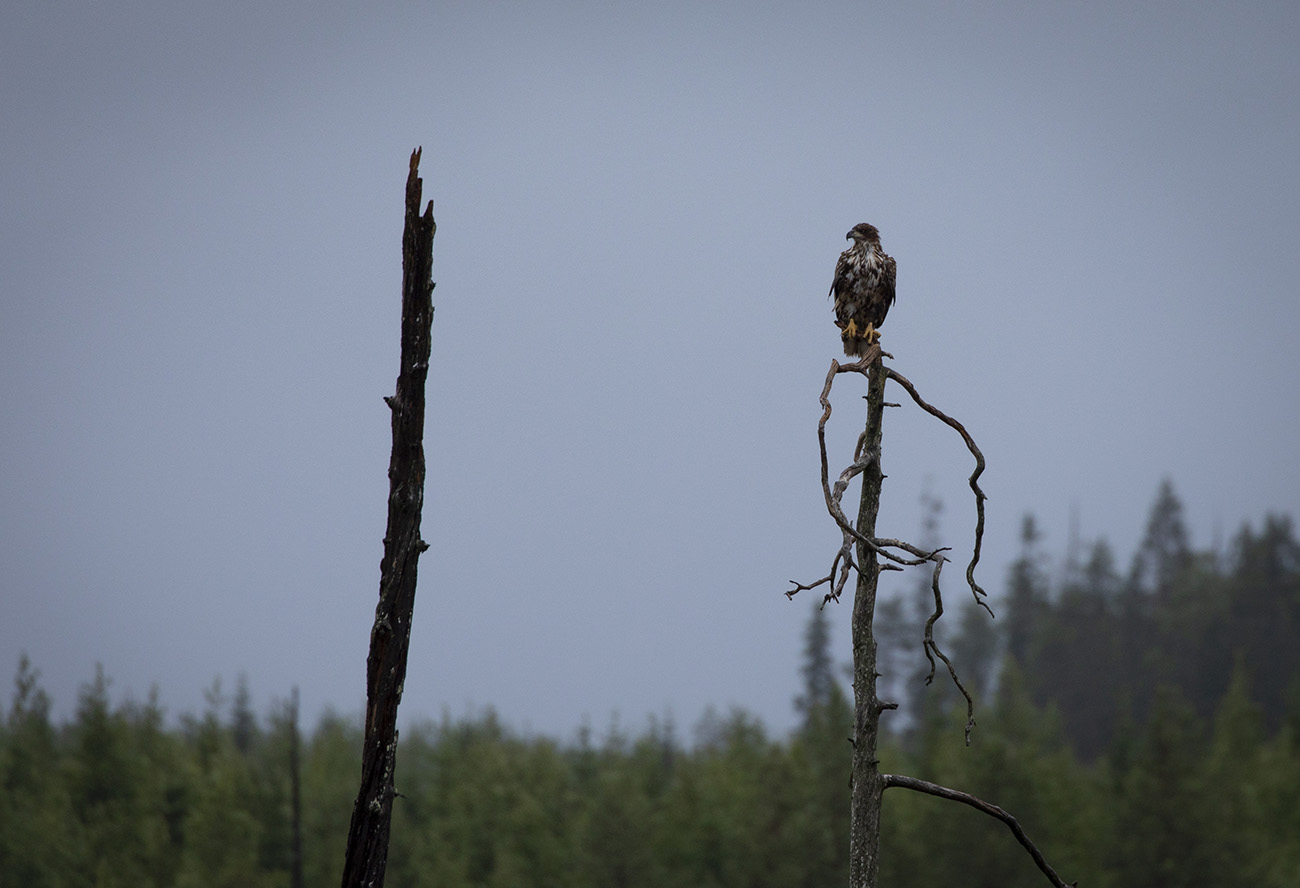 All in all this was an awesome night and would definitely go back hoping to see some wolves. If I would just want to photograph bears I would prefer the Wild Bear Center because the hide was in much better condition (with the toilet inside the hide) and the bears were a lot closer, so you wouldn't need more than 400 mm lens. However, this one offered an exciting experience with all the males around and a different scenery.