After googling a little bit, I found out that there are bear photographing hides around Finland. Wild Brown Bear Center had really good reviews and was the cheapest option from all the ones that I have checked.

We drove from Helsinki about 7-8 hours and we arrived around 10 o'clock in the night. For those of you who are coming from somewhere else than Finland you can go by plane to Kajaani airport and ask them to pick you up from there for a fee.

Anyway, 10 o'clock was too late for going to hides, so we just spent the night in the cabin.

They have a big cabin with several rooms where you can sleep and take shower, but don't expect anything fancy. It's a cabin in the middle of nowhere with no shops or anything near by. The closest shop is at least half an hour away by car.

The next day we had breakfast and talked a little bit with the other people there. Besides us three, there were two more Finnish people and a British woman, so not very crowded place in September. There is a big lake near by and a bird hide, so you can easily spend your day taking landscape pictures or bird pictures. They had a rowan tree right in front of the cabin and there were lots of waxwings feeding on the berries. Unfortunately for us the weather was quite bad for photography. Rainy, dark and gloomy, so couldn't really take any good landscape or bird pictures. The bird hide is in a really shady place, so in this kind of weather and with Canon 80D at that time I couldn't take any good pictures without light. 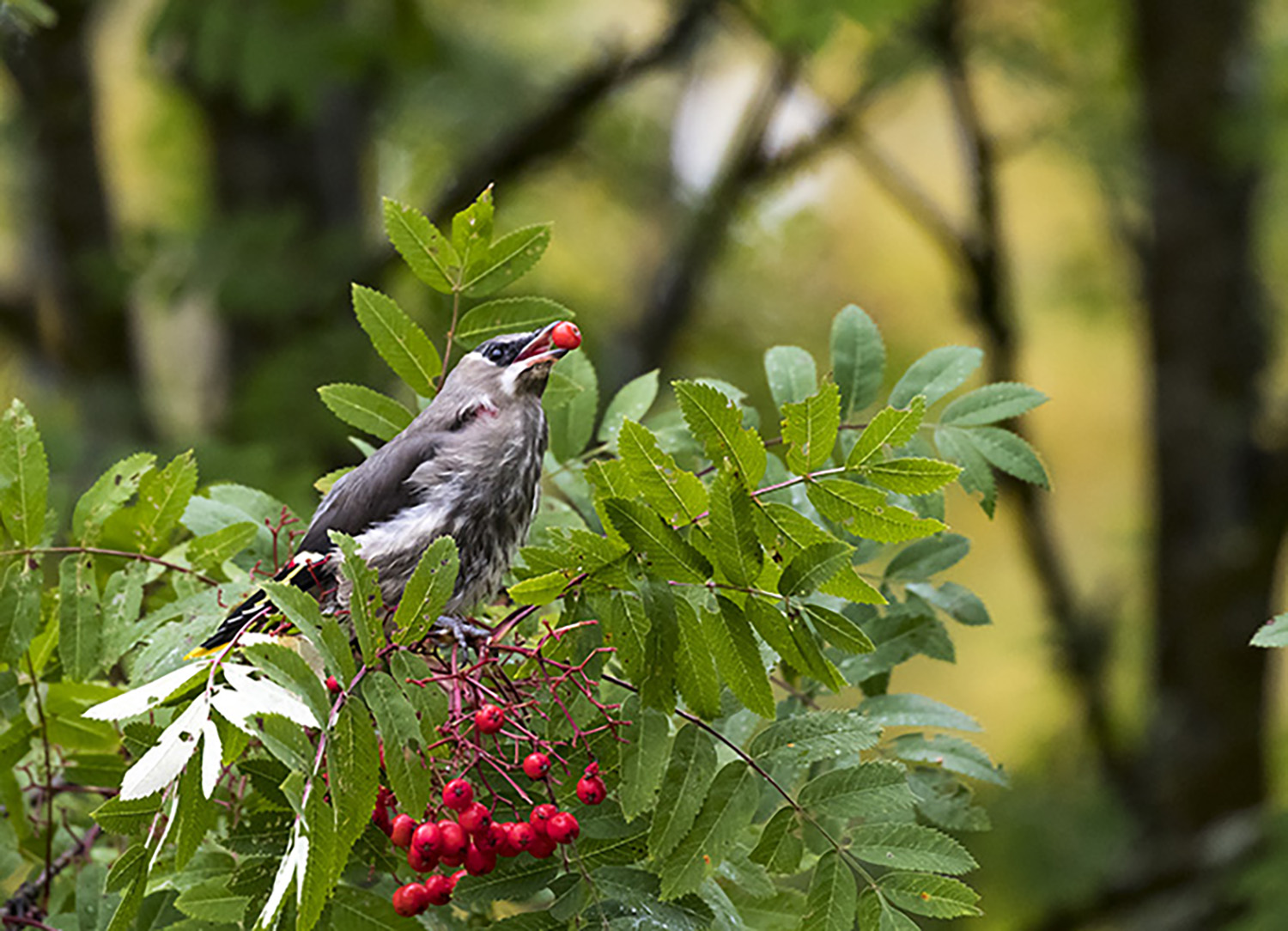 Around 4 o'clock we all went to the bear hides, which are around 700 m away. The bear hides are small little cottages where you cannot really stand up fully and they have chairs, some sleeping bags and a very small toilet, however it is quite an upgrade compared to a tent! I mounted my tripod head on a wooden plank and then we were just waiting for a bear to show up. You cannot really talk too much during the experience because, as we found out, the bears are really scared of people. After about half an hour of waiting the first bear appeared. I wasn't expecting it to come so soon, but there it was.

We soon realized that these bears were scared of everything, even crows, which was a huge surprise. After a couple of smaller bears, the big male arrived and he didn't seem to fear us that much (understandable considering his size). The British woman was telling us that the bears actually have names and there are books written about them and so we found out that the big male was called Brutus. 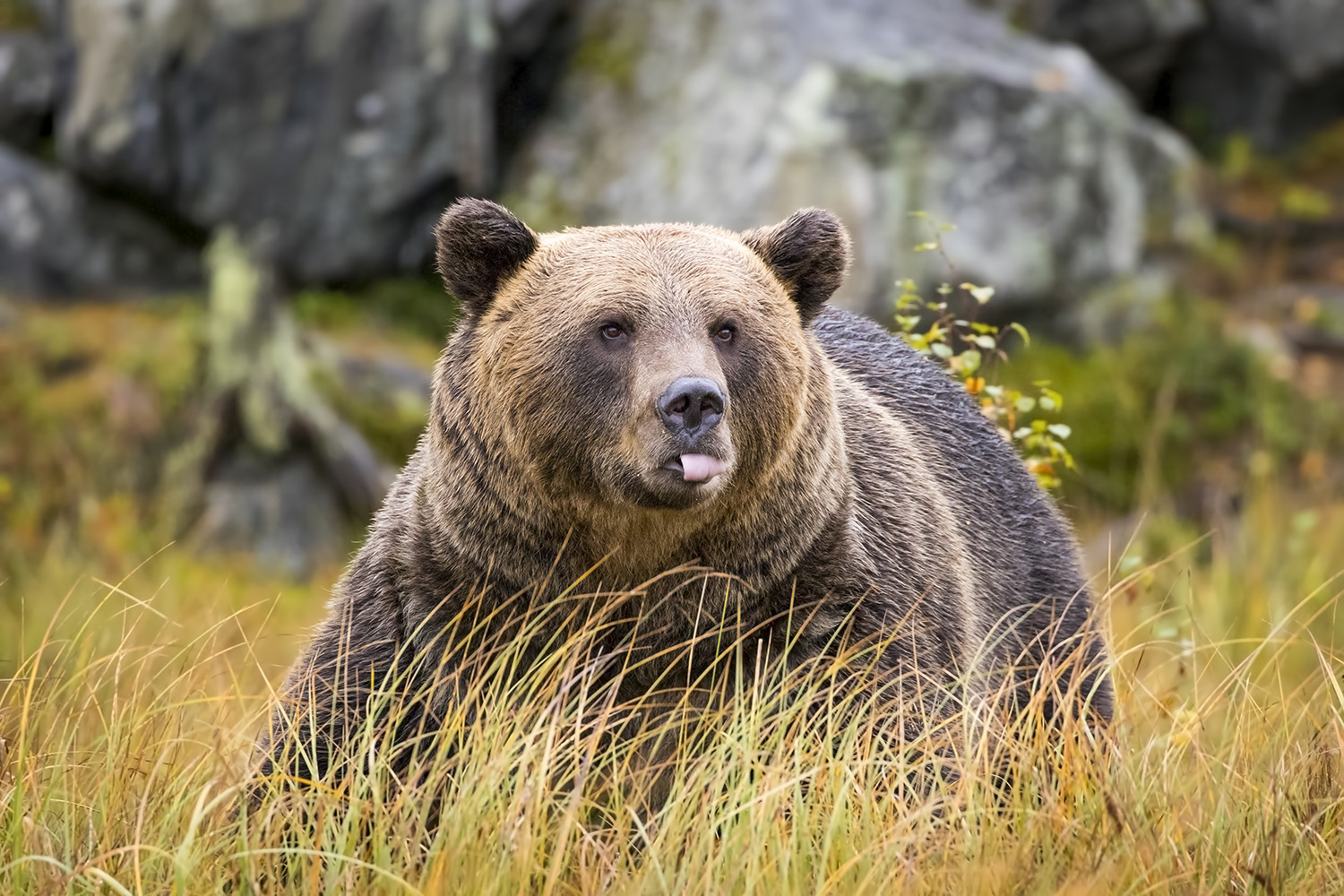 During the night we saw several times the big male, several smaller bears, two females with cubs and a wolverine. There was no time to get bored and the bears kept coming throughout the night. Around 10 o'clock it was already night time and we had to go to sleep. Because it was September the temperature was about 6-7 degrees, so taking your own sleeping bag would be highly recommended. We had to use our own sleeping bags plus the ones they already provide to keep warm. 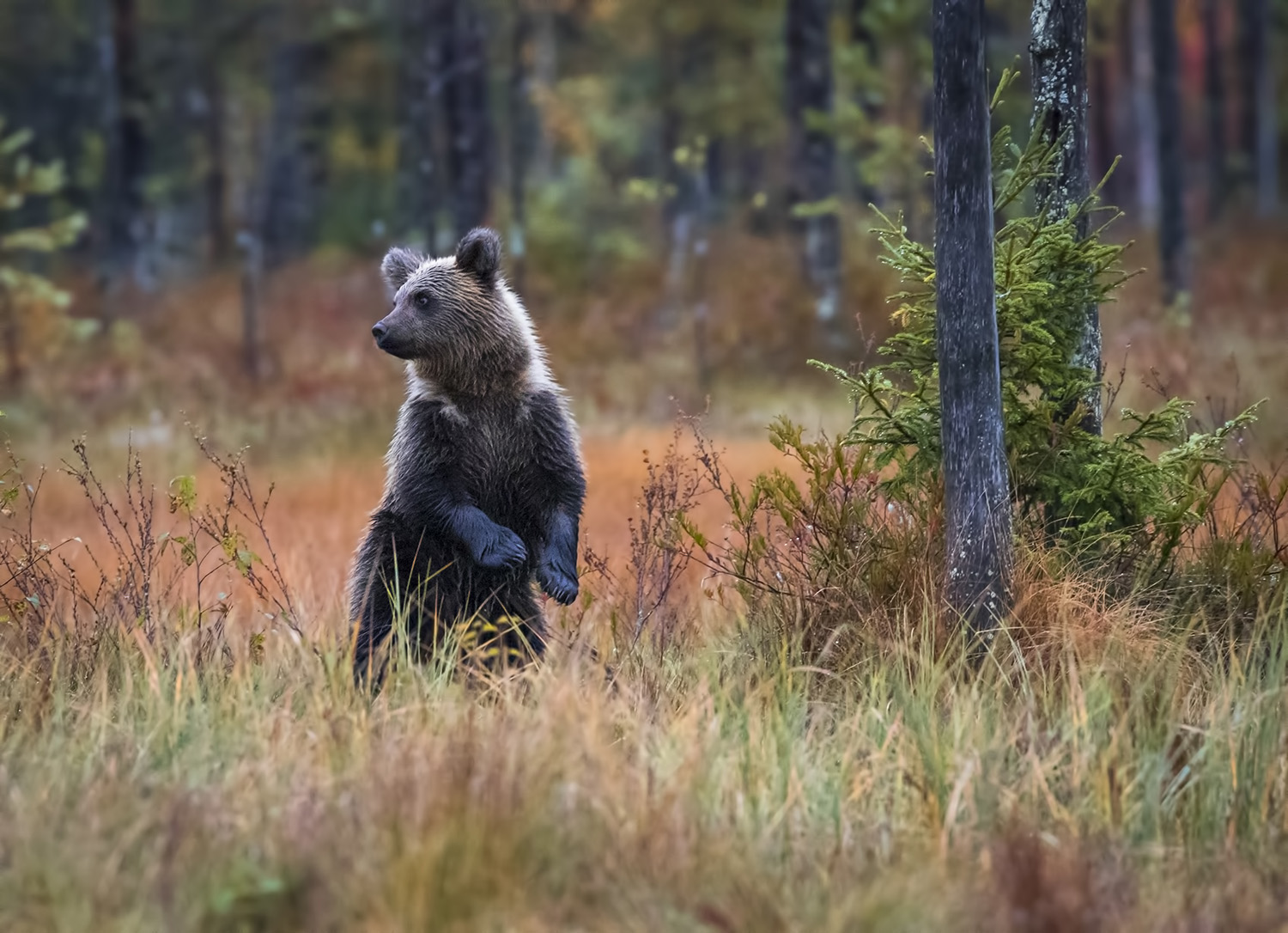 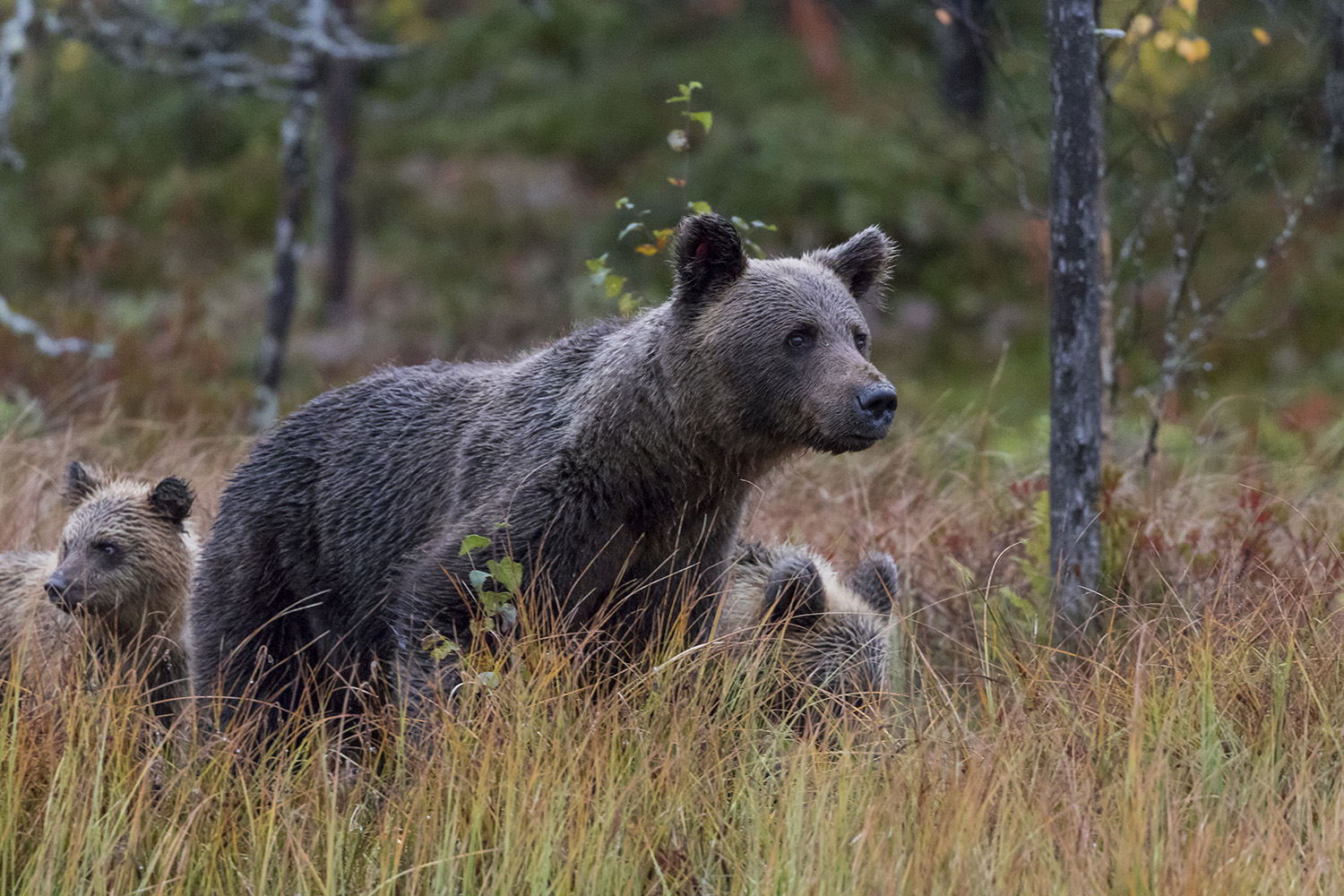 Next morning we woke up around 7 o'clock and we still got to see one bear. Nobody came to pick us up from the hide and while I was walking back to the cabin, I felt a bit scared, considering that just half an hour earlier we saw a bear in the area. Then I remembered how scared these bear were of people, so I don't really think they have the courage to come closer. Also by now, probably they already learned the schedules when people come and go and they know not to be in the area.

All in all this was an amazing experience and even with the bad weather and not the best camera for low light I managed to take some decent pictures. The wolverine passed so quickly and it was already quite dark, so I didn't manage to get a good shot. 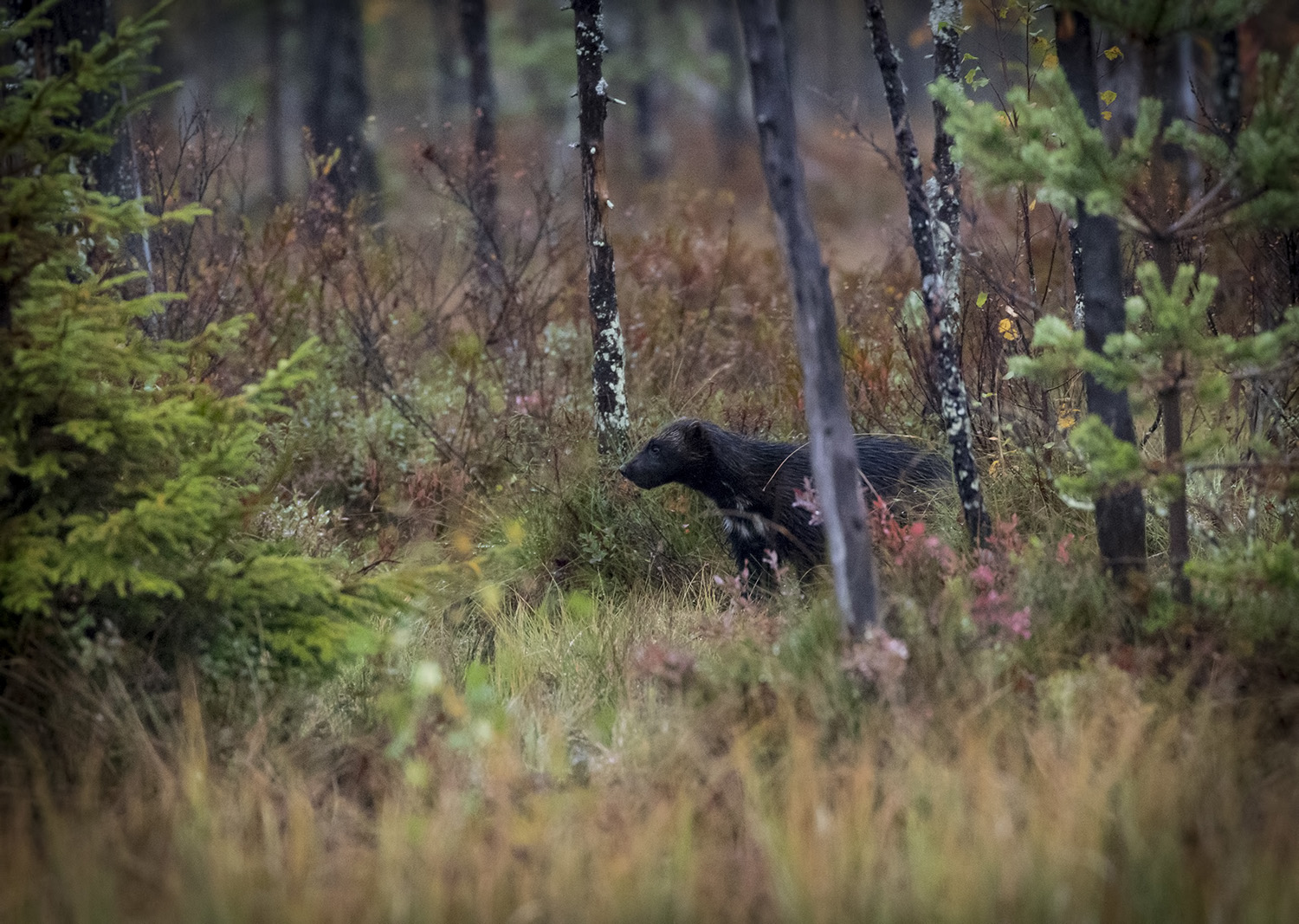 They also have bigger hides just for watching the bears if you are interested. You can check their website and be in contact with them at https://www.wildbrownbear.fi/