Fish has sustained the population of Norway for centuries and, as a result, one of the most powerful nations in history was born here, the Vikings. The most important fish in Lofoten (and Northern Norway in general) is the Norwegian arctic cod, which migrates in the area every year, from January to April, in order to spawn. Lofoten's main fish product is stockfish, which is usually cod, dried by cold air and wind on wooden racks. You will notice that every village here has the wooden racks around the fishing cabins.

The fish in Lofoten was so abundant, that a lot of other people from Northern Norway came here during the season to take part in the fishery. The traditional fisherman's cabins (called "rorbu" in Norwegian) used to be rented out to the fishermen and date back at least 1 000 years. You will see the fisherman's cabins all over Lofoten and they are all kept in excellent condition, making these villages around these islands really beautiful and special.

Here are a few of the villages I had the pleasure to visit during my stay in Lofoten, each village being surrounded by magnificent views of the fjords and mountains. I was driving from Tromsø, so the villages are in the same order as I visited them.

Svolvær is more of a town than a village and it is located on the island of Austvågøy. It has a population of 4 720 people (year 2018). 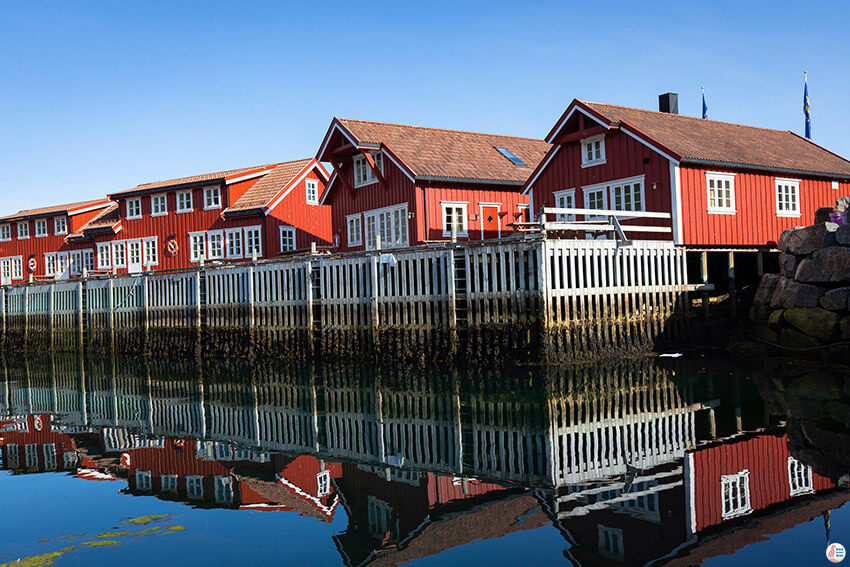 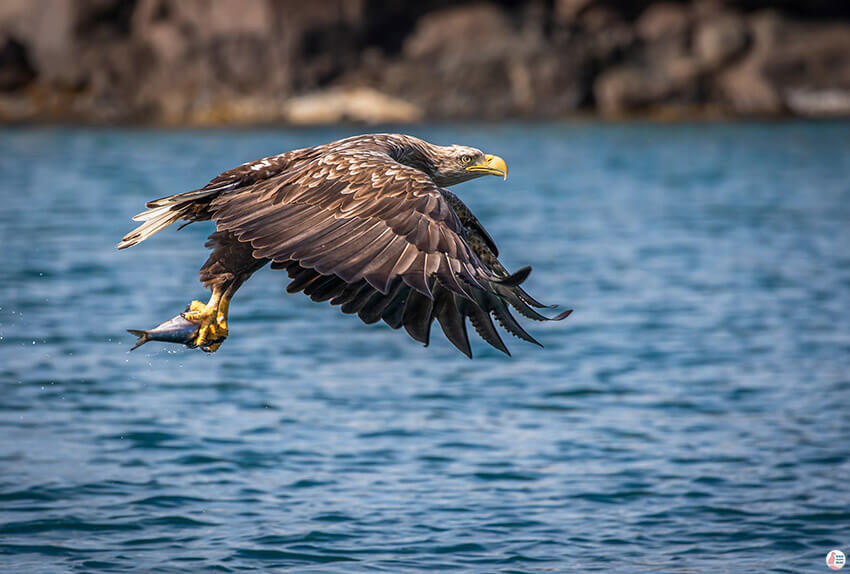 Svolvær is also famous among rock climbers, Svolværgeita rock formation being one of the most climbed rocks in Lofoten. 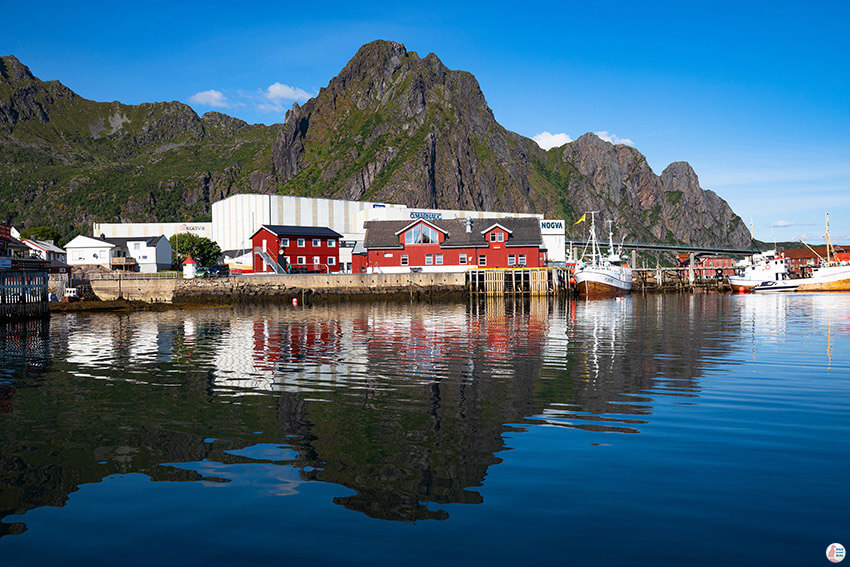 Most of the fishing cabins nowadays are reserved for tourists and for example these ones below looked amazing. 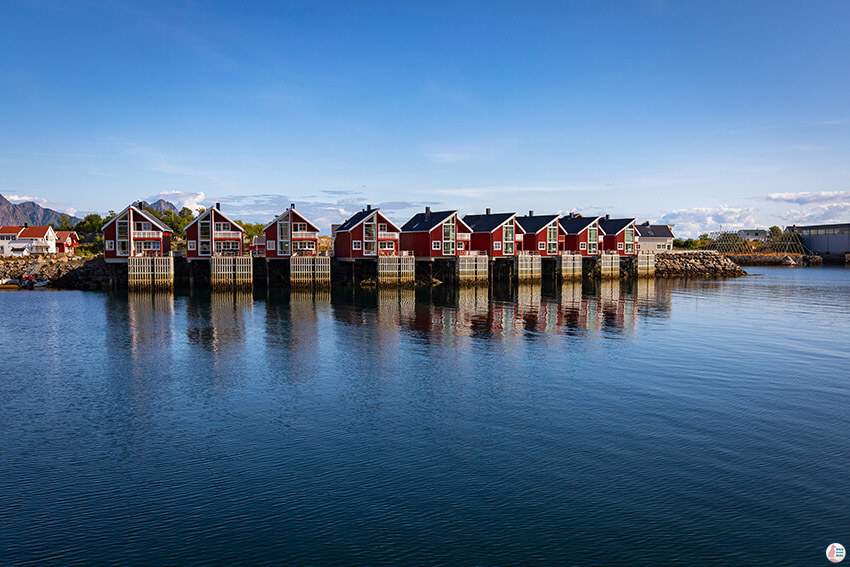 Henningsvær is a fishing village located on several small islands off the southern coast of the large island of Austvågøya in the Lofoten archipelago. The village is about 20 kilometres drive southwest from Svolvær, mostly located on the islands of Heimøya and Hellandsøya. 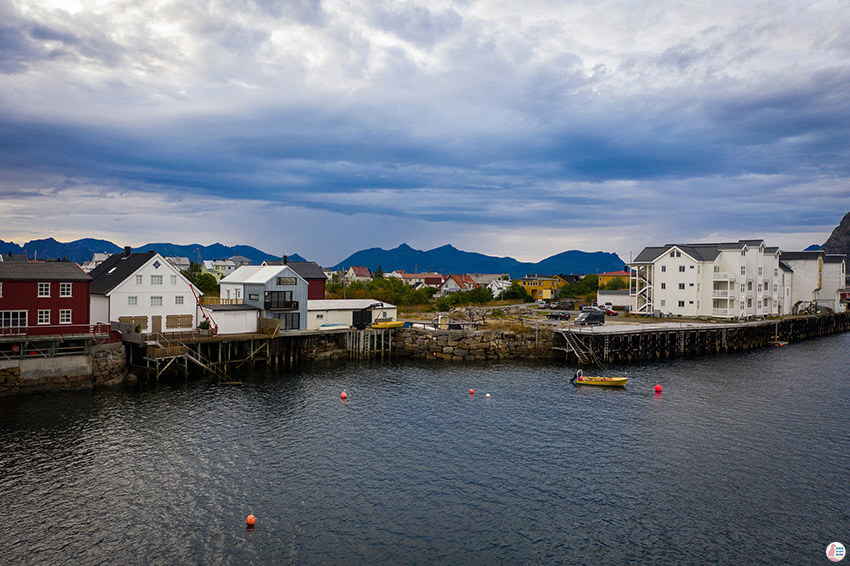 Henningsvær is connected to the rest of Vågan via the Henningsvær Bridges, which have been opened quite recently (1983). The fact that the bridges here were open so late means that Henningsvær was quite isolated, so it has the most pristine fisherman's village kind of architecture from the entire Lofoten region. 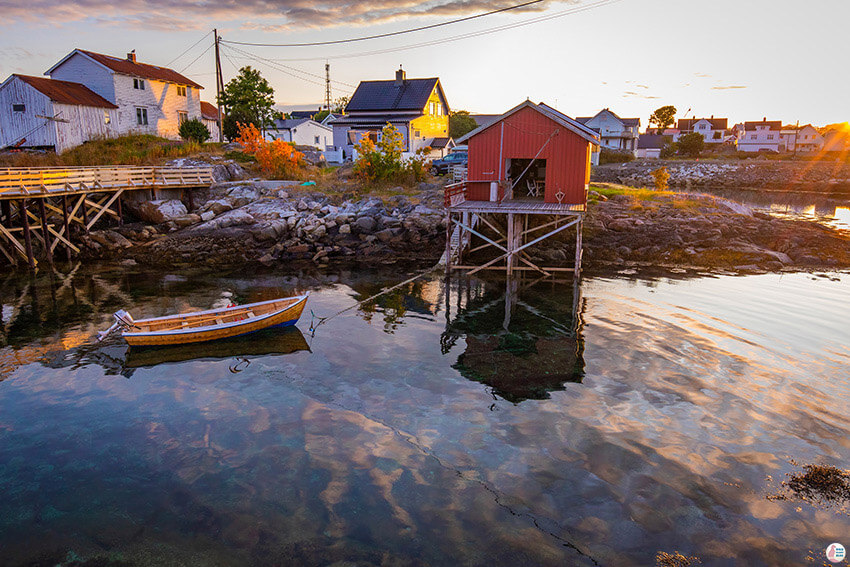 The entrance to Henningsvær is just stunning, with steep mountains on one side of the road and tiny islands on the other side. 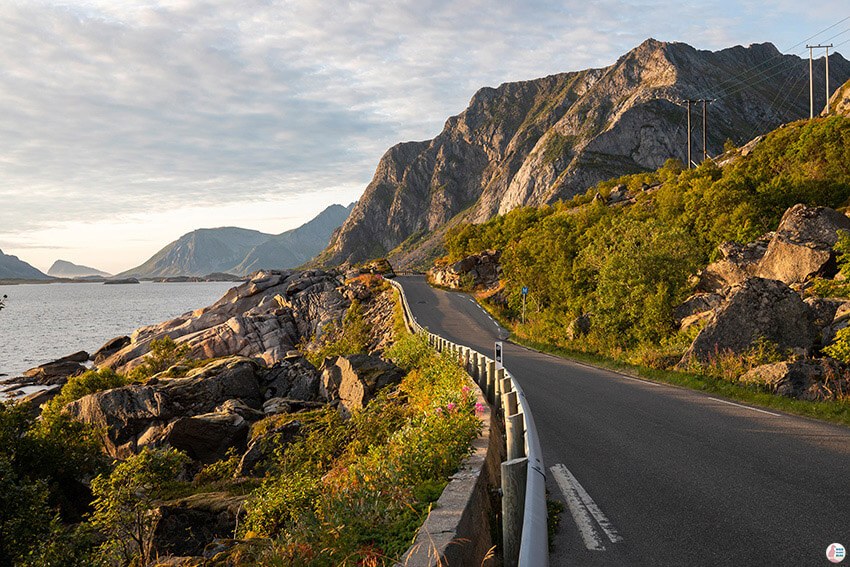 It is really nice to walk in Henningsvær, with lots of restaurants and cafes where you can stop. Probably the most famous view of Henningsvær is this one below. 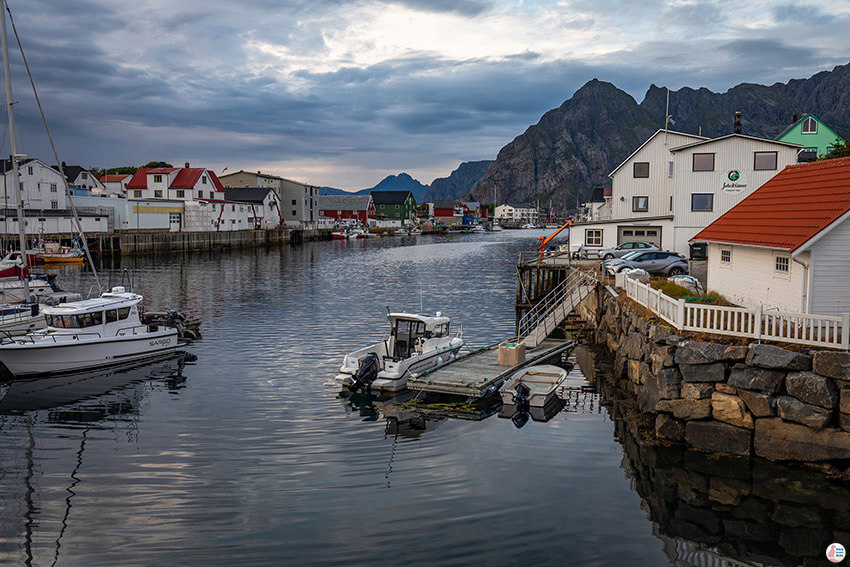 Nusfjord is a very small fishing village, surrounded by mountains. This village has become a bit too popular and it seems that this has triggered the village to ask for a fee in order to be allowed to enter. I had to pay around 10 € to enter Nusfjord, which for me sounds a bit extreme. I visited at the end of August, so there weren't that many tourists and I was surprised that I have to pay this fee. The village itself is very small, but it has a small museum. 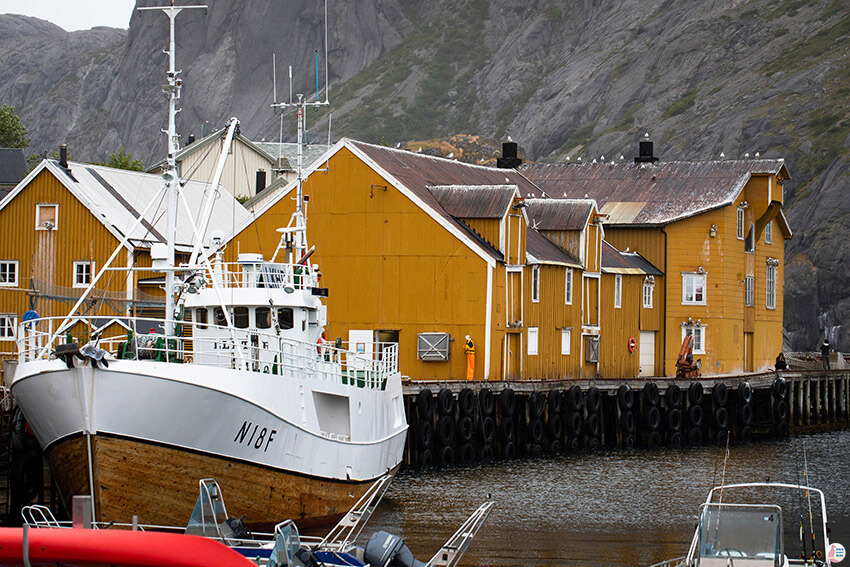 There are many kittiwakes nesting here, including on the main building, very close to people. The birds were not aggressive, but slightly loud :) 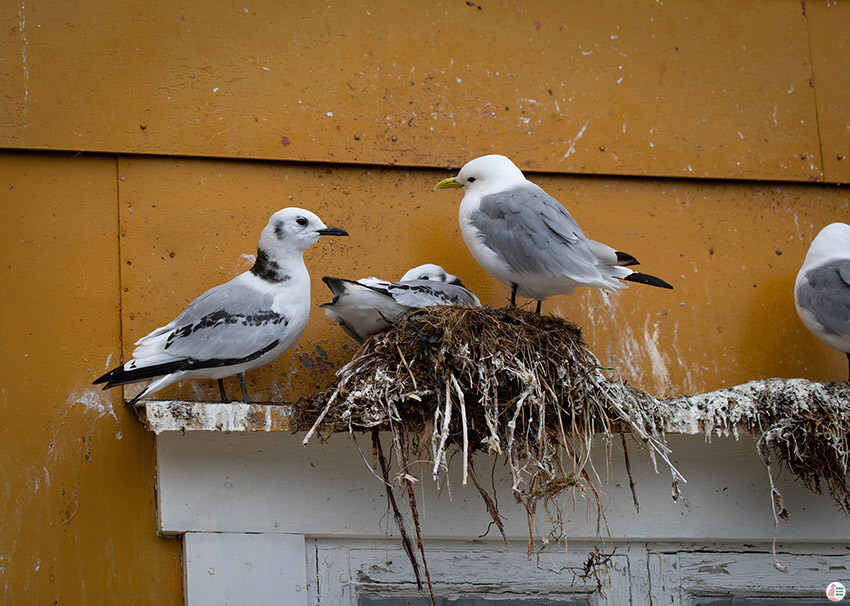 The stockfish that I was talking about at the beginning of the article is very famous and often used as decoration. 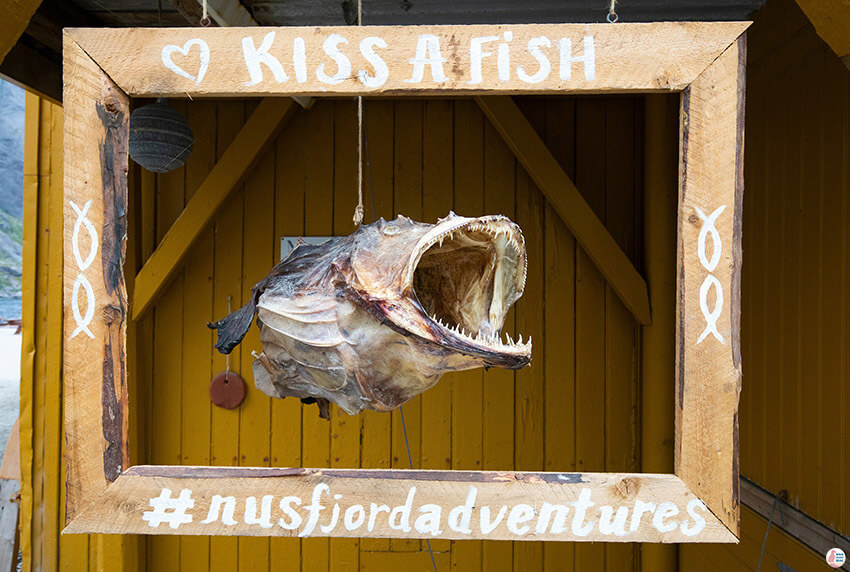 Hamnøy is the famous "picture perfect" village from Lofoten. I would say that the most famous and most beautiful part of Lofoten starts here. It is located on the eastern side of the island of Moskenesøya, about 1.5 kilometres northeast of the village of Reine, along the Vestfjorden. Hamnøy was previously connected to Reine by ferry, but this was replaced by bridges on the European route E10 highway as part of the Lofoten Mainland Connection. The famous picture below is taken from the bridge that connects Hamnøy to Sakrisøy. 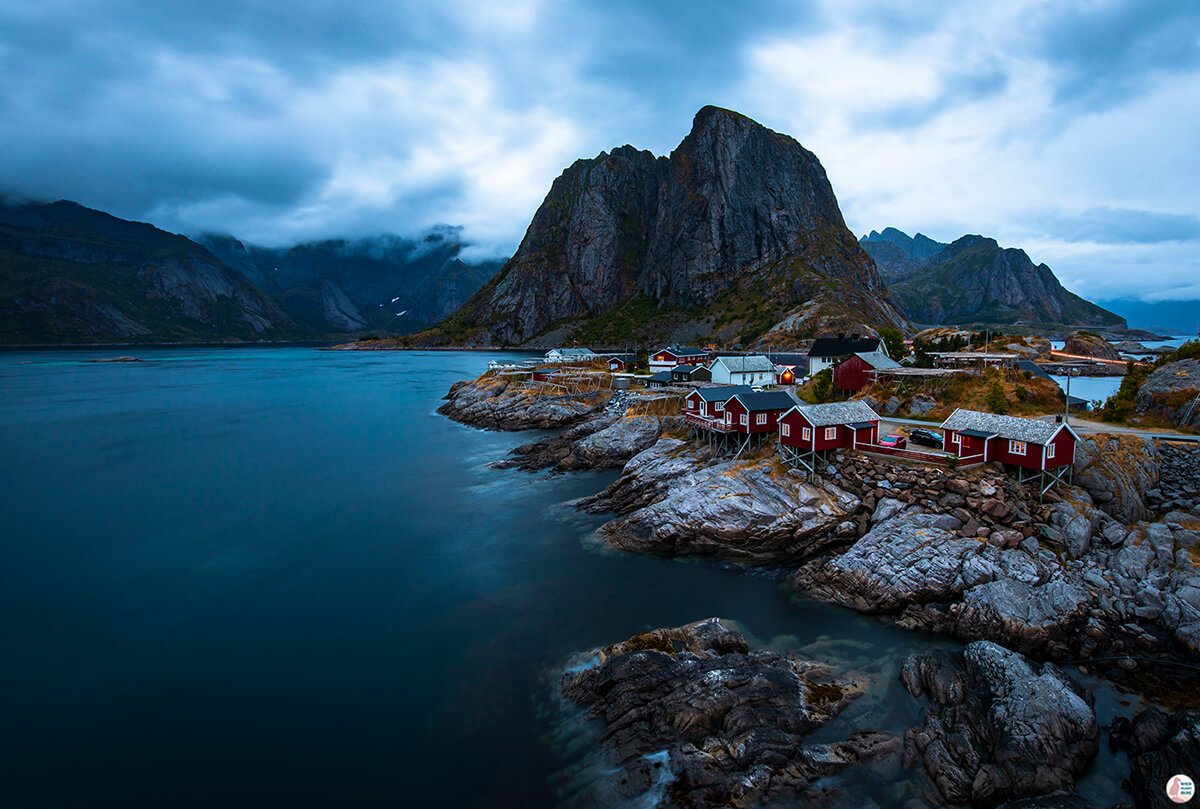 Driving a bit further you get this breathtaking view of the mountains that surround the area. 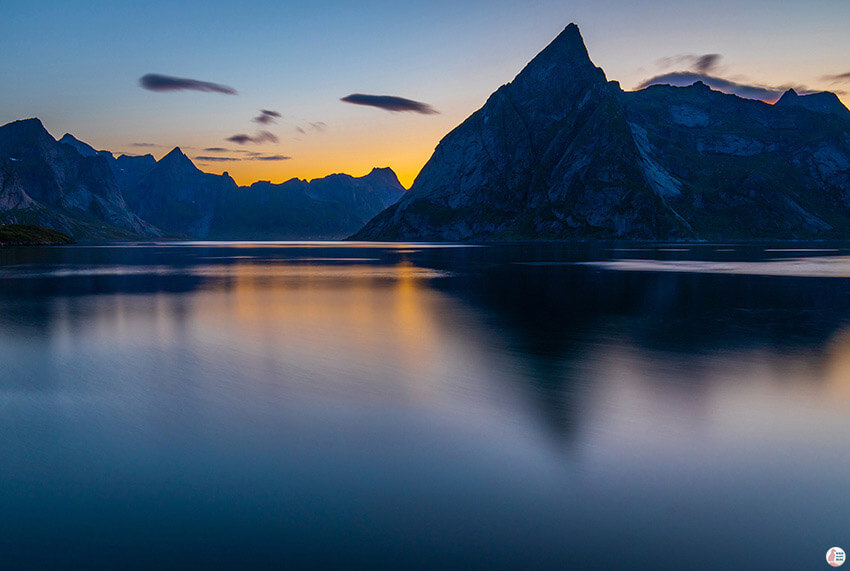 Very close to Hamnøy is the small village of Sakrisøy. We actually stayed here 3 nights and explored the whole area, using Sakrisøy as a base. 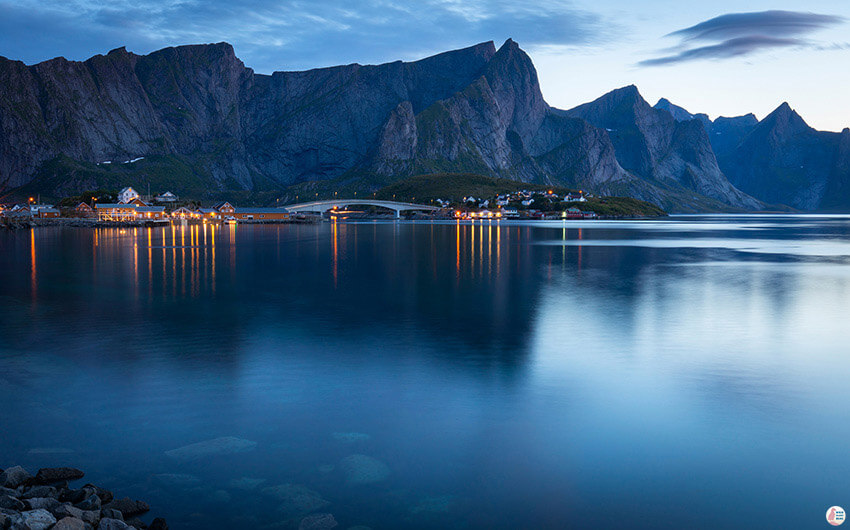 There is a lovely fish snack place called "Anitas Seafood" that definitely deserves a stop. It has the most delicious fish soup I have ever tasted. Probably this was also the most expensive fish soup that I have ever tasted, costing around 20 €, however I have noticed that it is not possible to get food in Lofoten for under 20 €, so considering this fact, the soup was worth it! They also have very good coffee and fish sandwiches.

I would say that Reine is the most famous fishing village place in Lofoten and it is the administrative centre of Moskenes Municipality in Nordland county, Norway. 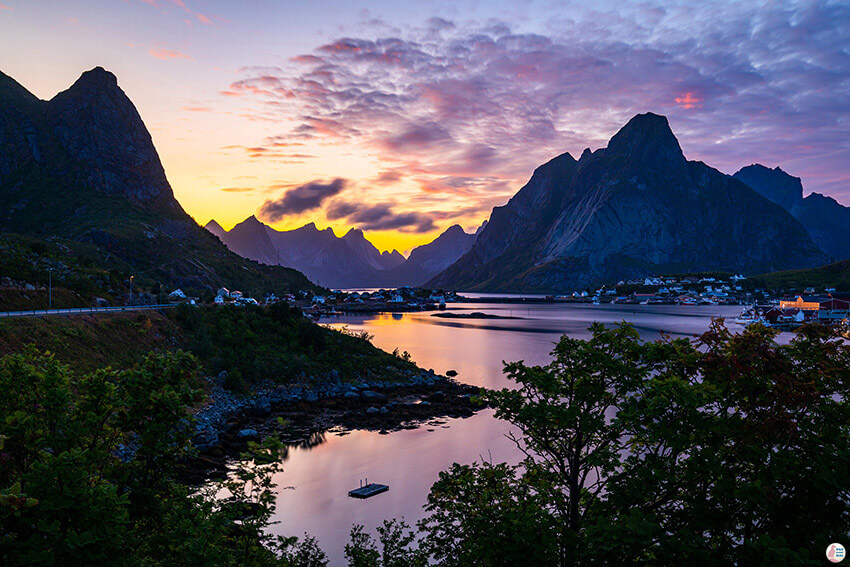 What makes Reine so famous is the Reinebringen viewpoint, which is definitely the best view in Lofoten. You can see all 3 villages from here: Reine, Sakrisøy and Hamnøy. It is a long, steep climb to get to this viewpoint, however in 2019 the sherpa stairs opened and it makes this viewpoint much more accessible to people and less dangerous . 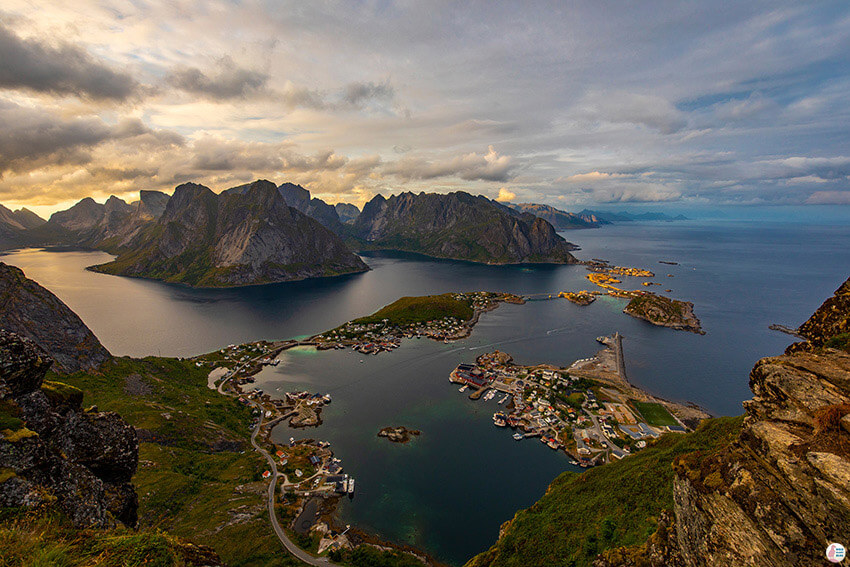 Sørvågen has a total population of 440 people (year 2018) and, like all villages in Lofoten, the main sources of living for the people here are tourism and fishing. 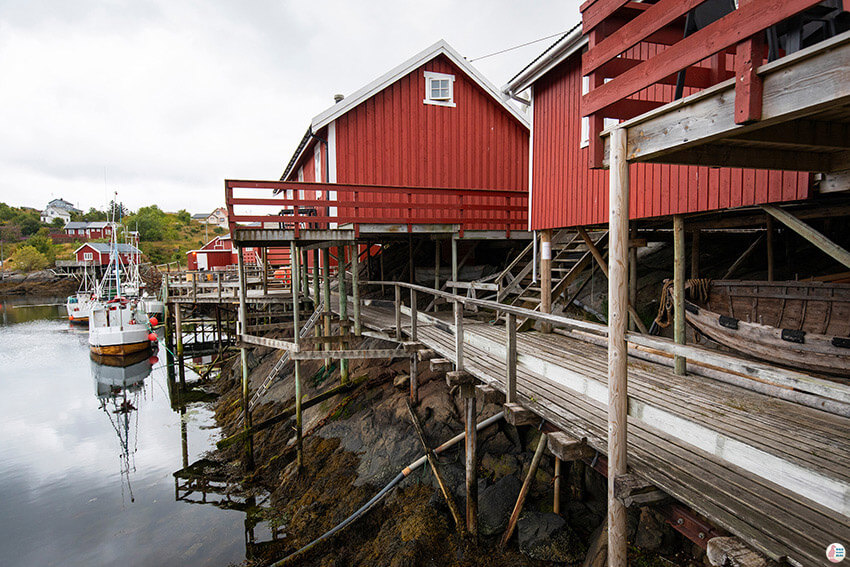 In 1861, the island became part of the 170 kilometres (110 mi) long Lofoten telegraph line with a station in Sørvågen (which became the Sørvågen museum in 1914), being finally connected with Europe in 1867.

In 1906, a wireless telegraph system was installed in Sørvågen—the second in Europe after Italy—connecting Sørvågen with Røst.

The village has great surroundings and it is a starting point for the famous Munkebu hiking trail.

We had an excellent dinner at a small restaurant called Maren Anna, which I highly recommend. 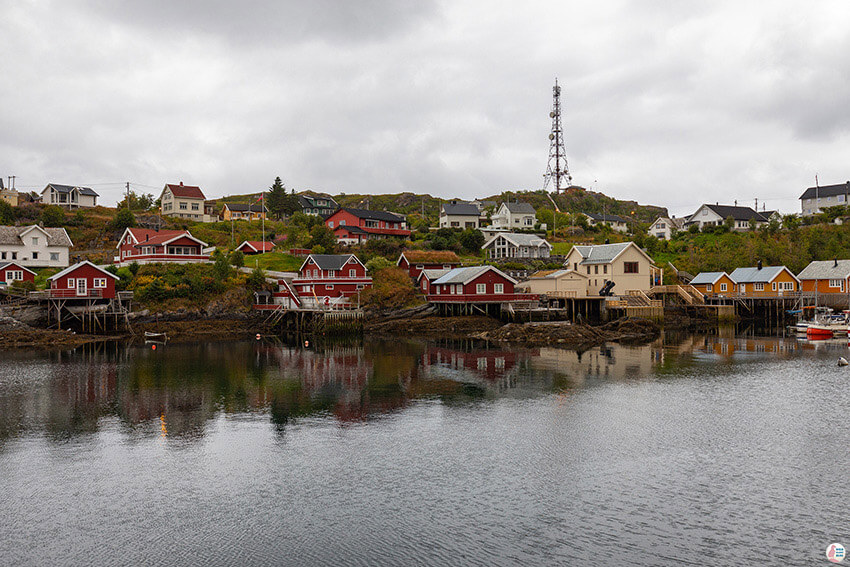 Å fishing village is the last (or first, depending where you come from) village in Lofoten that is connected to European route E10 and it is the point where the road ends (or starts). This part of the road is also called King Olav V's road. To distinguish the village from other villages in Norway called Å, the village is often referred to as Å i Lofoten, which means Å in Lofoten. 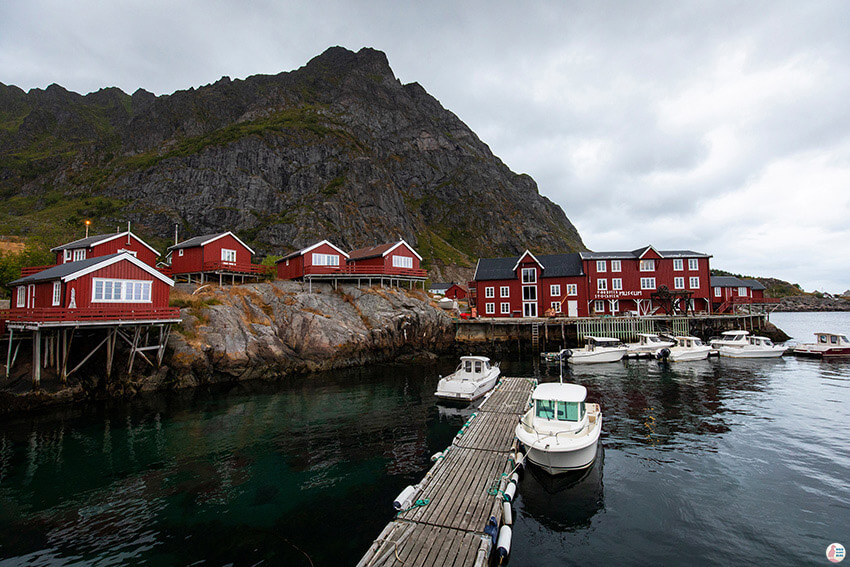 Until the 1990s, Å was mainly a small fishing village specialising in stockfish, but since then tourism has taken over as the main economic activity. The town features the Lofoten Stockfish Museum and the Norwegian Fishing Village Museum as two big tourist attractions.

There are some nice nature trails just opposite of the village itself, where camping is also possible. 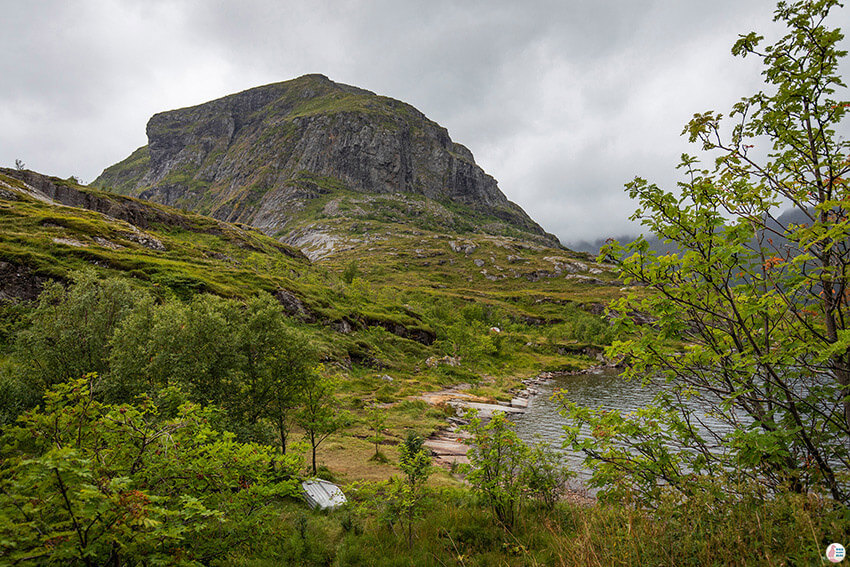 The village itself looks really great, with wooden bridges between the fishing cabins. There were also many kittiwakes nesting around, but what I really liked was the small puppet in the centre of the village. 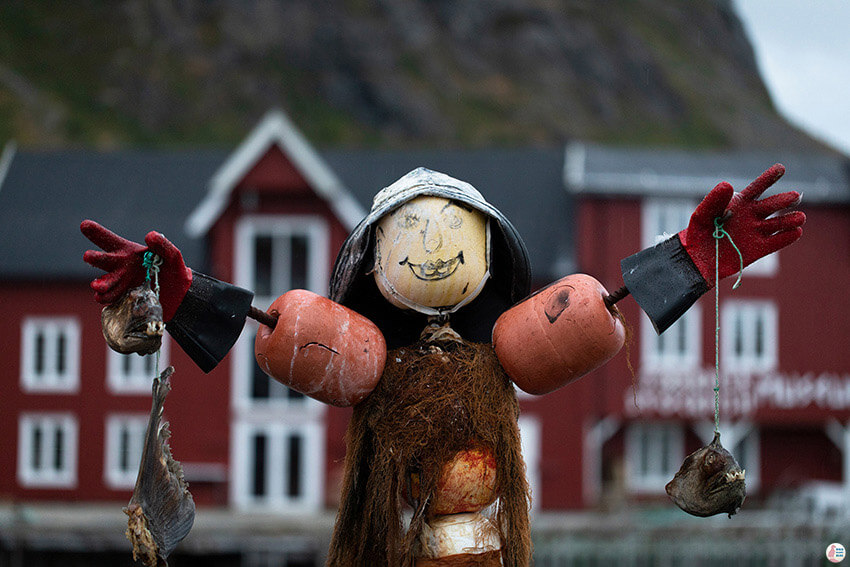 All the fishing villages in Lofoten have a certain magic and they are all special. So far I haven't seen this kind of villages anywhere else and the vibrant colours of the suspended cabins reflecting in the water give them their special charm. You can really imagine how important fishing activities used to be for this small communities. Norway is world renowned for its sustainable fishing and it's in the best interest of the country to keep it like this. The whole livelihood of these northern villages depend on it.

Visit Værøy - What to See on This Wild Island in Lofoten, Norway

Værøy is a wild and remote island located in the Lofoten archipelago with plenty of places to see! If you want to enjoy stunning views all by yourself and explore the great wilderness of Norway, Værøy is the perfect island to visit!