Visit Værøy - What to See on This Wild Island in Lofoten, Norway

Værøy is a wild and remote island located in the Lofoten archipelago with plenty of places to see! If you want to enjoy stunning views all by yourself and explore the great wilderness of Norway, Værøy is the perfect island to visit!

Værøy is an island municipality in the Lofoten archipelago and it's part of Nordland county in Northern Norway. This island is very remote and it doesn't have as many tourists as the main Lofoten islands that are connected with roads to the mainland. Værøy is home to around 750 people and is one of the warmest places that is located this far north, all thanks to the Gulf Stream. The winter temperatures rarely drop below 0 °C (32 °F), however it's a very windy place and the weather changes rapidly (as I experienced myself while hiking here). I visited Værøy at the end of August and the weather was a bit rainy, but not too cold. I think there were around 14 °C, however this felt much colder in some parts of the island, where it was really really windy. Visiting at this time of the year meant that most of the tourists were already gone and I could enjoy this island in peace. We stayed 2 nights here and we got to explore most of the island, except the difficult hiking paths.

How to get to Værøy

You can get to Værøy by ferry from Bodø or by ferry from Moskenes, depending from which side you are visiting. This island was our last stop in Lofoten, so we went there by ferry from Moskenes and then left towards Bodø. The ferry price from Moskenes was 441.00 NOK (around 45 €) and the trip lasted 1h 30 min. When we left Værøy, we took the ferry to Bodø, which costed 962.00 NOK (around 97 €) and the trip lasted around 5h 15 min and it was a night ferry. This ferry goes first to Moskenes and then to Bodø and you don't have to get off the ferry while in Moskenes. The price of the ferry includes a normal car and 2 people (including the driver). We booked the ferry in advance and paid online from Torghatten Nord pages.

Where to stay and eat in Værøy

We booked 2 nights from Lofoten Værøy Brygge, a small place by the harbour. This was the only place I could find where to sleep and I don't think there are others on the island. They also have a very good restaurant here, which in our case was open after 16:00. If you are camping, this is possible on the other side of the island. They have showers and toilet available there as well. There is a small coffee place and a shop in the center of the island, where you can have free refills. Even though this island is very remote, with not so many people living here, you can still find a restaurant, a shop and have a nice, warm shower. This is one of the reasons I love nordic countries!

What to see in Værøy 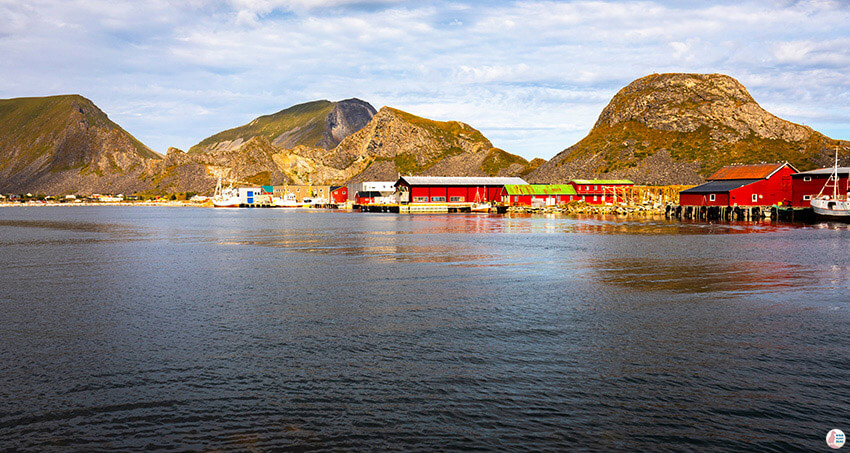 Værøy is a small island, but with lots of places to explore and lots of hiking trails! To check all of the available hiking trails you can download maps.me application on your phone. This application is great for exploring the island. 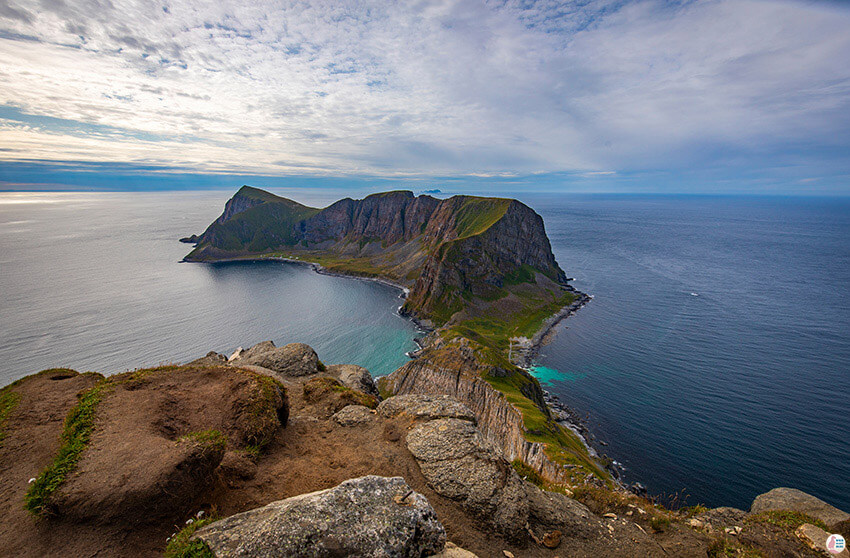 Måstadfjellet viewpoint is probably what makes Værøy famous to begin with. I first saw a picture of this in National Geographic a few years ago and I really wanted to check this out ever since. I have to admit that this was the only place I knew about on the island and the main reason I decided to visit Værøy. Remember when I said above that Værøy's weather can change very fast? Well, I have experienced this when hiking to this viewpoint and this is why I had to hike there twice during my 2 day visit. This is an easy hike, with most of the path being an actual road. Check more about how to reach Måstadfjellet viewpoint on its own, dedicated page.

There are other trails from this point if you feel adventurous. I am not that good of a hiker and, as I found out during my Lofoten trip, I am a bit scared of heights, so I didn't try out any of the difficult ones. 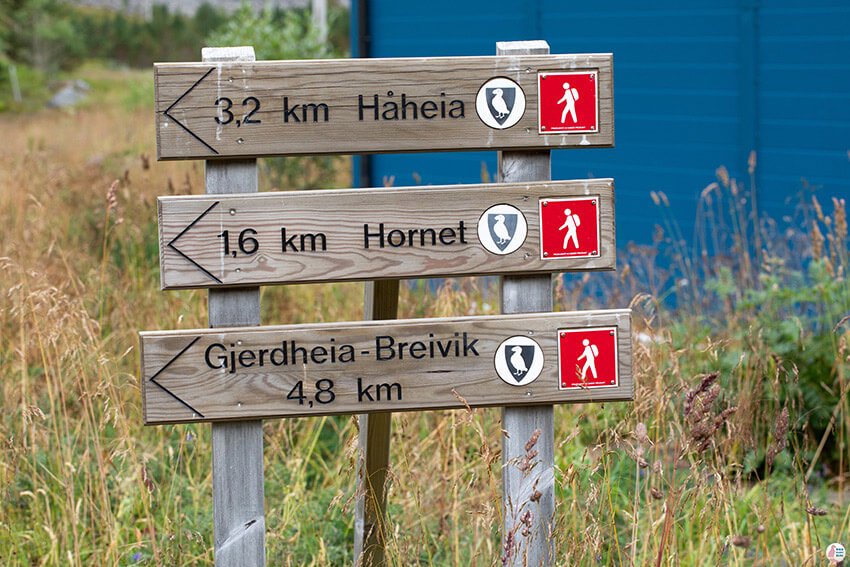 2. Walk around Sørlandshagen and experience the incredible beach 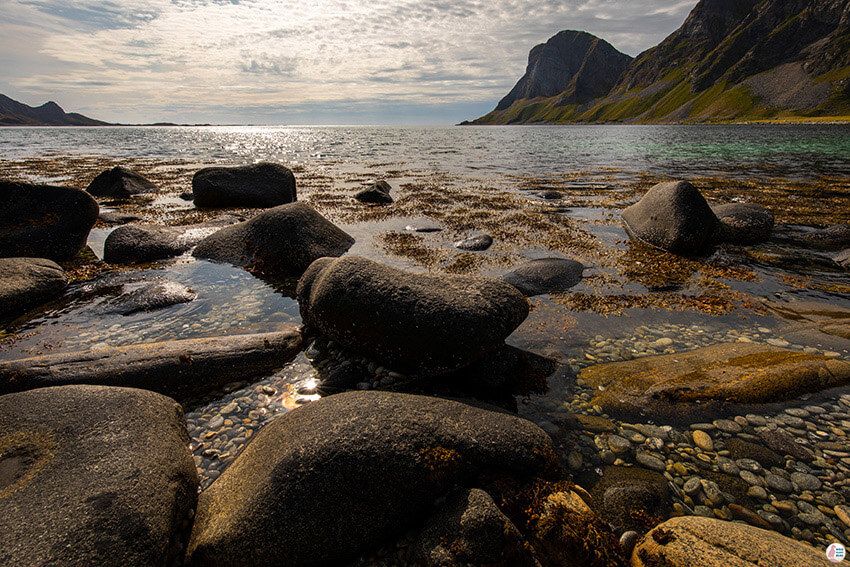 From the same place where Måstadfjellet viewpoint trail starts, towards the other direction, you can have an easy walk around Sørlandshagen. This beach has the most awesome stones I have ever seen! They are all very round, beautiful colour and really fine to touch. They look like they have been skilfully crafted this way. I know it's strange that I am so enthusiastic about some rocks, but these rocks are really beautiful. 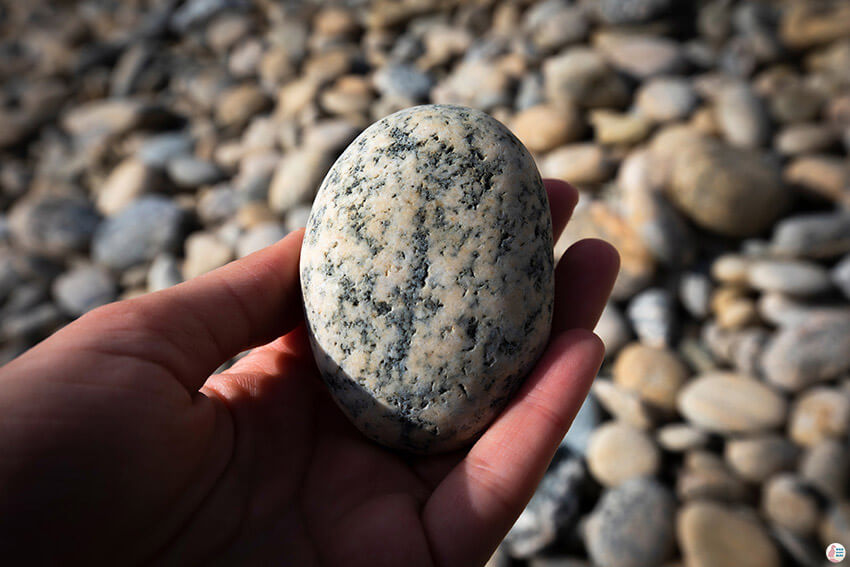 There is a demanding hiking trail that starts here towards Nupneset. We only walked around the easy paths and did not venture on the demanding route. 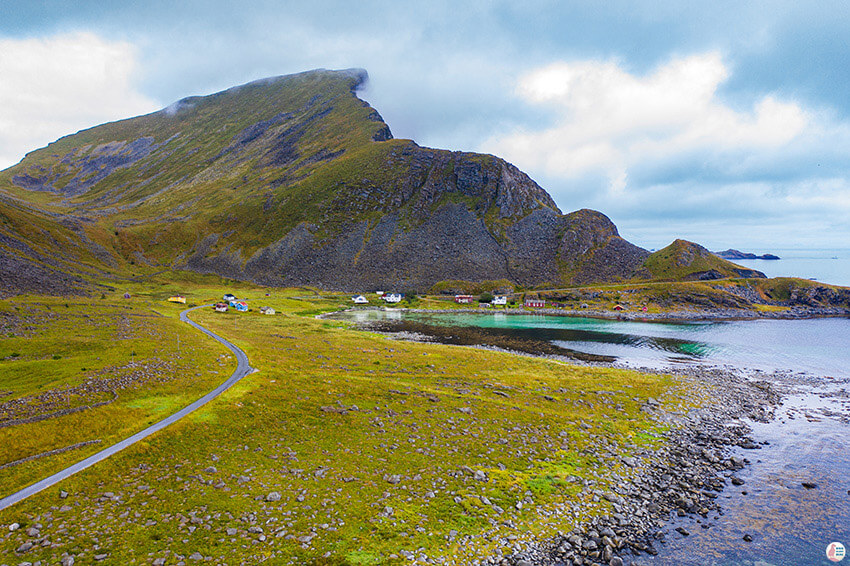 This road felt like something of a fairy tale. Even though the main attraction of Værøy is Måstadfjellet viewpoint, I would say that Breivika is more beautiful. The white sand and turquoise, crystal clear waters are amazing!

Here is a picture of this beach that I took with my drone. 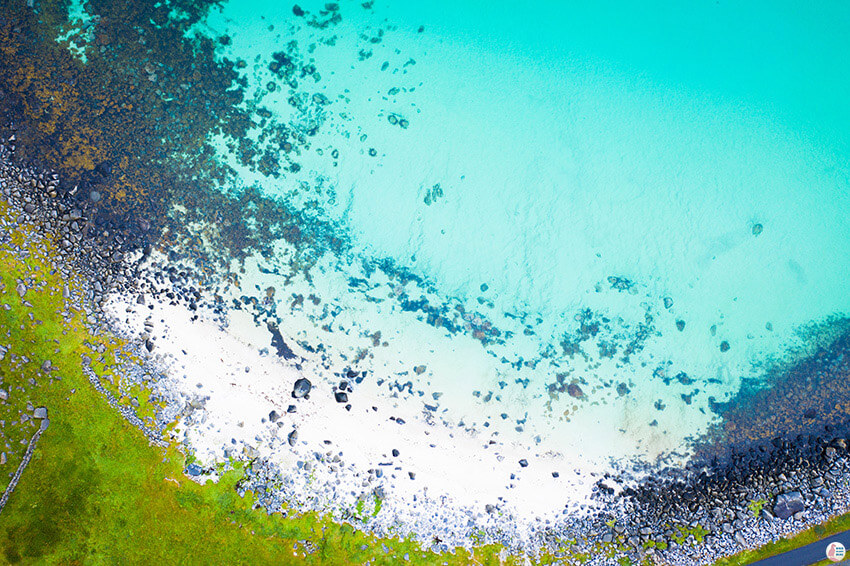 During summer it can be quite warm and you can even go swimming. We tried it, even though it wasn't so warm and it seems that one of the reasons why the water is so clear is that it's really salty.

Continuing on this road you get to another viewpoint, where you can see Mosken island in the distance. 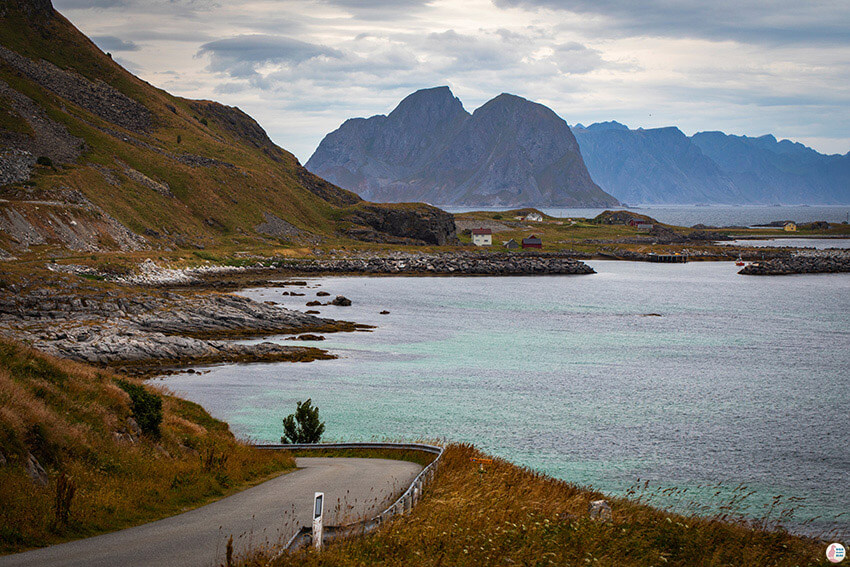 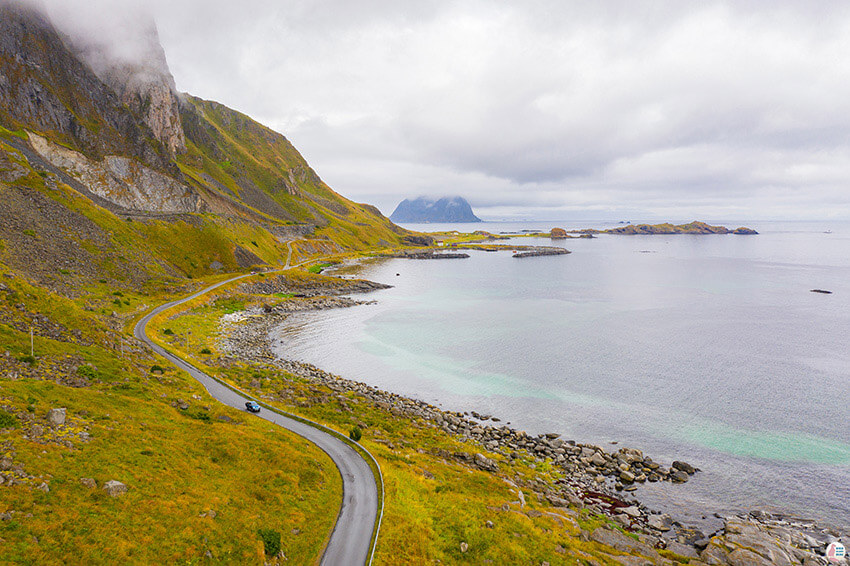 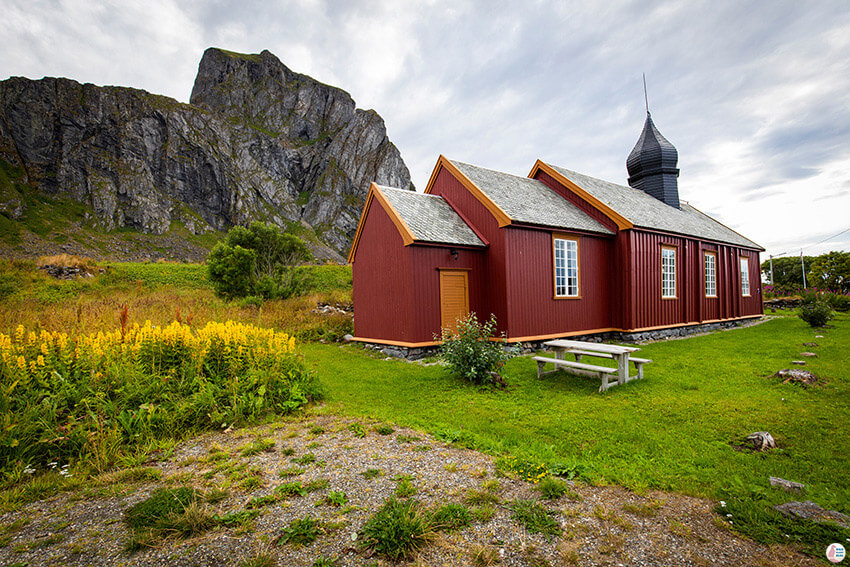 The Værøy church was built in approximately 1740 in Vågan and moved to Værøyin 1799. It was extended in the period 1897 - 1901 and painted white, but it regained its original red colour in 1974. This is the oldest church in Lofoten which is still in use today. It has 200 seats. 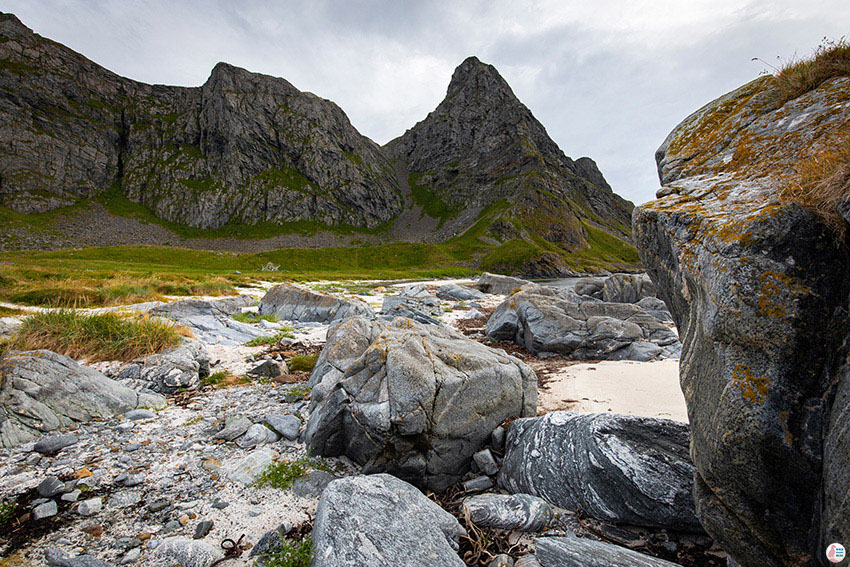 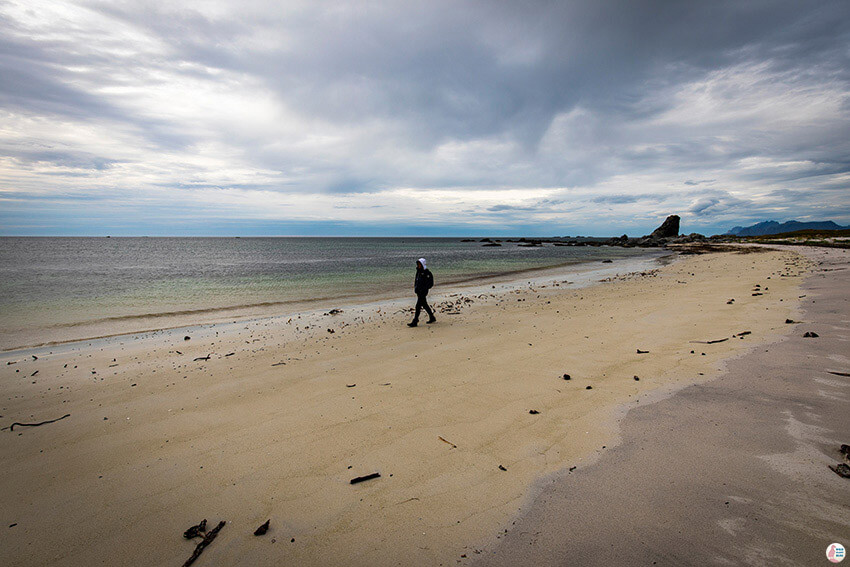 Nordlandshagen is a beautiful area with impressive mountains and a beautiful white sand beach, where you can also camp. There are toilets and shower facilities. Every year there is an event here called "The midnight sun festival", which is a music festival that celebrates the midnight sun, as the name suggests. When we visited, the place was completely empty and quiet.

There are 2 demanding trails that start from this spot: Måstad and Hornskaret. 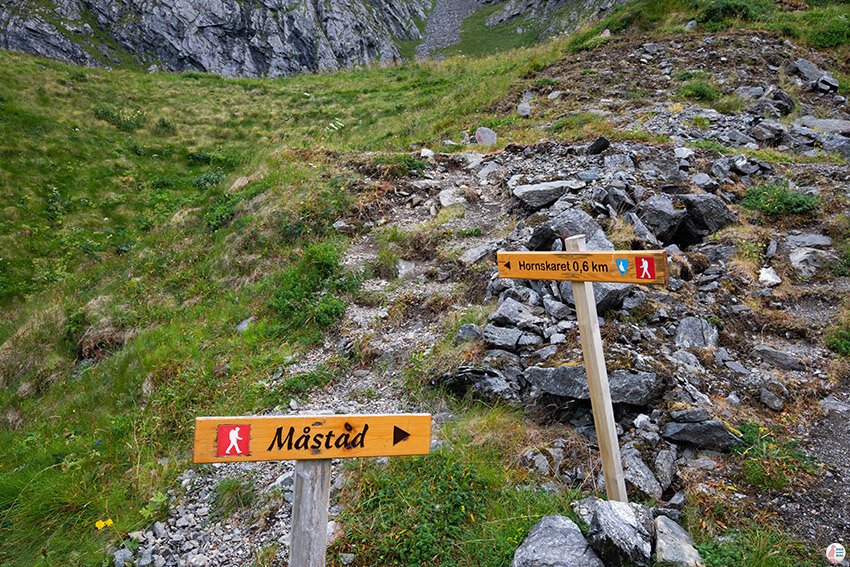 Måstad is a famous route that was used by locals to collect puffins. Puffins were a main source of food for the islanders and they even "created" a special dog for it called "Puffin Dog" (Lundehund in Norwegian). As the name suggests, the trail goes to the abandoned village of Måstad, on the other side of the island, which leads me to number 6 attraction in Værøy.

Måstad was in its prime around the year 1900 when over 120 people lived here. However, because there are no roads connecting to it and that it has a very unsatisfactory harbour, the village was abandoned a few years after World War II. The last citizens left Måstad in the 1950s. Today, the place is a great place to visit for those who seek wilderness and beauty. From 1950 to 1960, there were several houses from Måstad that were moved to the village of Sørland on the other side of the island where living was much easier. Today only a few houses are left still standing.

There are around 600 puffin dogs still existing today, even though they are not used anymore for hunting puffins. Puffins are endangered and people don't hunt them nowadays.

I couldn't find any puffin safari online in Værøy, but you will see fliers in Moskenes ferry port and in Værøy Brygge about booking a puffin safari by phone. Unfortunately I visited the island at the end of August, when puffins already left the island, so I couldn't take this one. You can see the puffins in Norway from around May to early August, even middle August.

In conclusion, there are plenty of things to explore on Værøy, especially if you like hiking and you can do the demanding trails. If you're not a good hiker, like me, you can just enjoy the Heia easy hike and then drive around the island and explore as much as you can. If you are not planning to hike that much you can explore the island by car in about a day, however if you don't want to rush too much I would recommend spending one night in Værøy.