Snaefellsnes Peninsula is just two hour drive away from Reykjavík and it's one of the most beautiful places to visit in Iceland. Most people visiting Iceland for the weekend usually go on the Golden Ring, but I would recommend visiting Snaefellsnes instead. For those who love photography, Snaefellsnes Peninsula is home to the most photographed mountain in Iceland, Kirkjufell. If Kirkjufell alone doesn't convince you to visit Snaefellsnes, there are plenty of other places to visit and photograph that probably will: waterfalls, beautiful mountains, glacier and black sand beaches. I think Snaefellsnes has everything that makes Iceland the land of fire and ice. There are not as many visitors here as there are on the Golden Ring, so in my case, this is a huge plus!

What I did was to first drive to the northern side and then back through the southern side of the peninsula. You could actually visit everything in one day if you wake up really early. During summer you get really long days so there is definitely enough time to drive from Reykjavík and back.

Where to Stay Close to Snaefellsnes Peninsula

I stayed for 3 nights at B59 Hotel, in Borgarnes and it was the perfect location to explore West Iceland. The hotel is in the centre of Borgarnes and it's very modern. You can book your stay through booking.com.

Here are is my list of the best places to visit and photograph on Snaefellsnes Peninsula, in visiting order, from north to south. 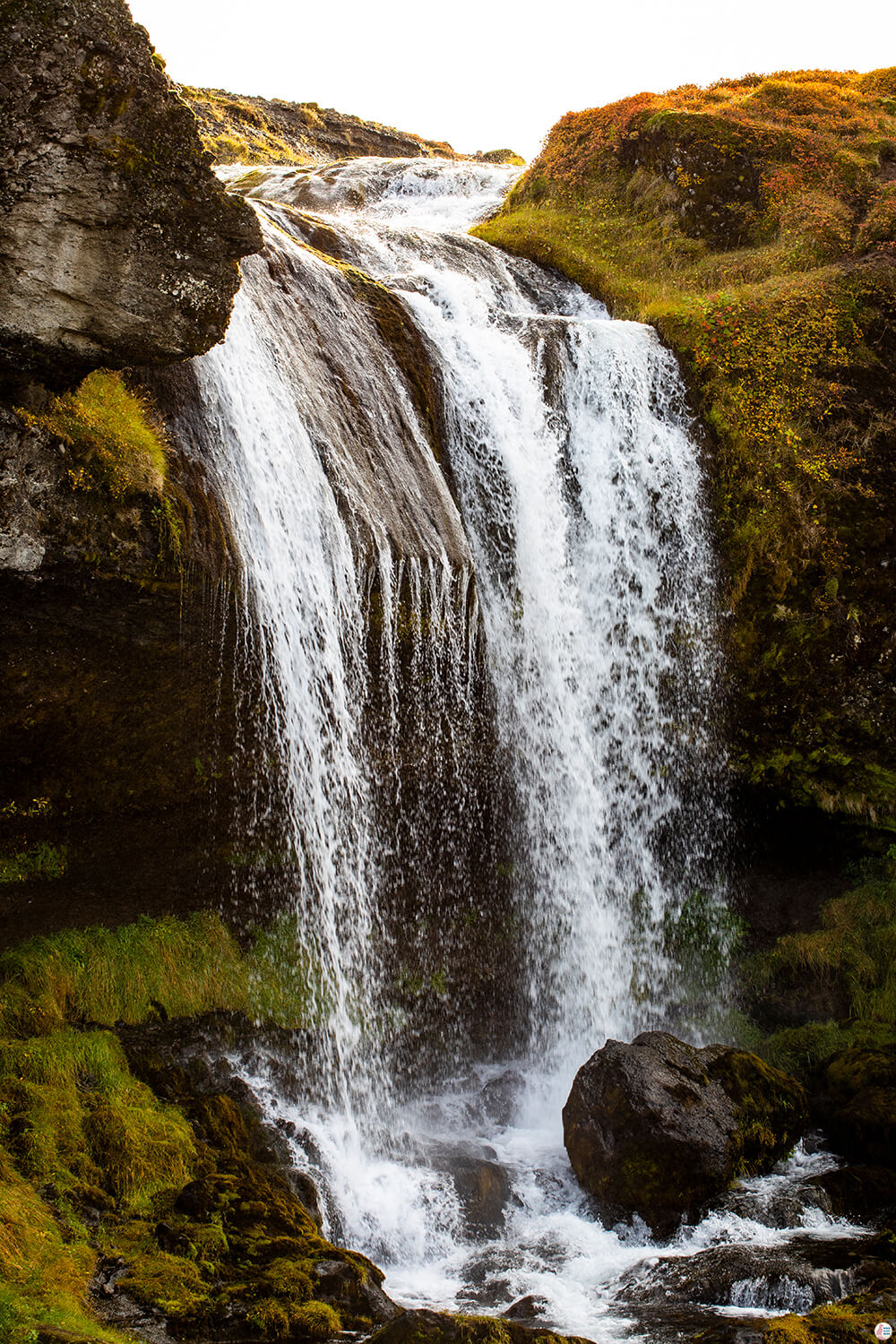 I actually didn't know that there is a waterfall here. Initially I stopped the car at the parking next to the road because the landscape was incredibly beautiful and I wanted to fly my drone.

There were only a few people around, but someone told me that there is a waterfall next to the road if I walk for 5 minutes. The waterfall is not visible from the parking lot because the waterfall is hidden a bit below the elevation of the road.

The whole scenery around this place looks amazing, just like the rest of the Snaefellsnes Peninsula. 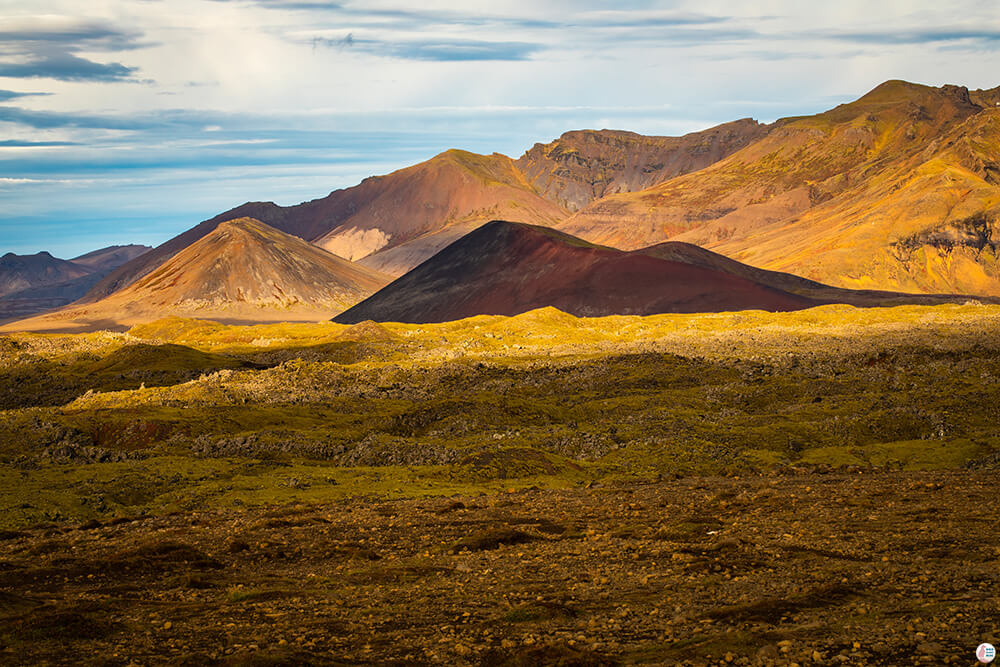 This bridge over the sea is surrounded by black, rounded mountains and there is a parking spot right before the bridge. 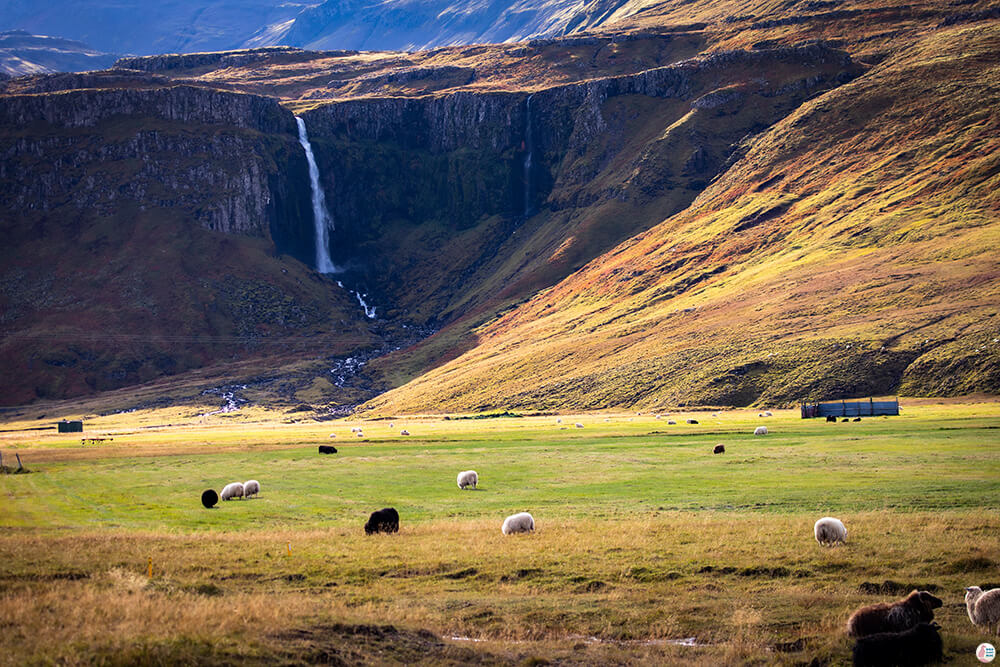 Just before the village of Grundarfjörður, there is a small parking, from which there is a trail that leads to Grundarfoss. There are many sheep around the area, so be careful when you drive. Many sheep end up spending quite some time on the road. 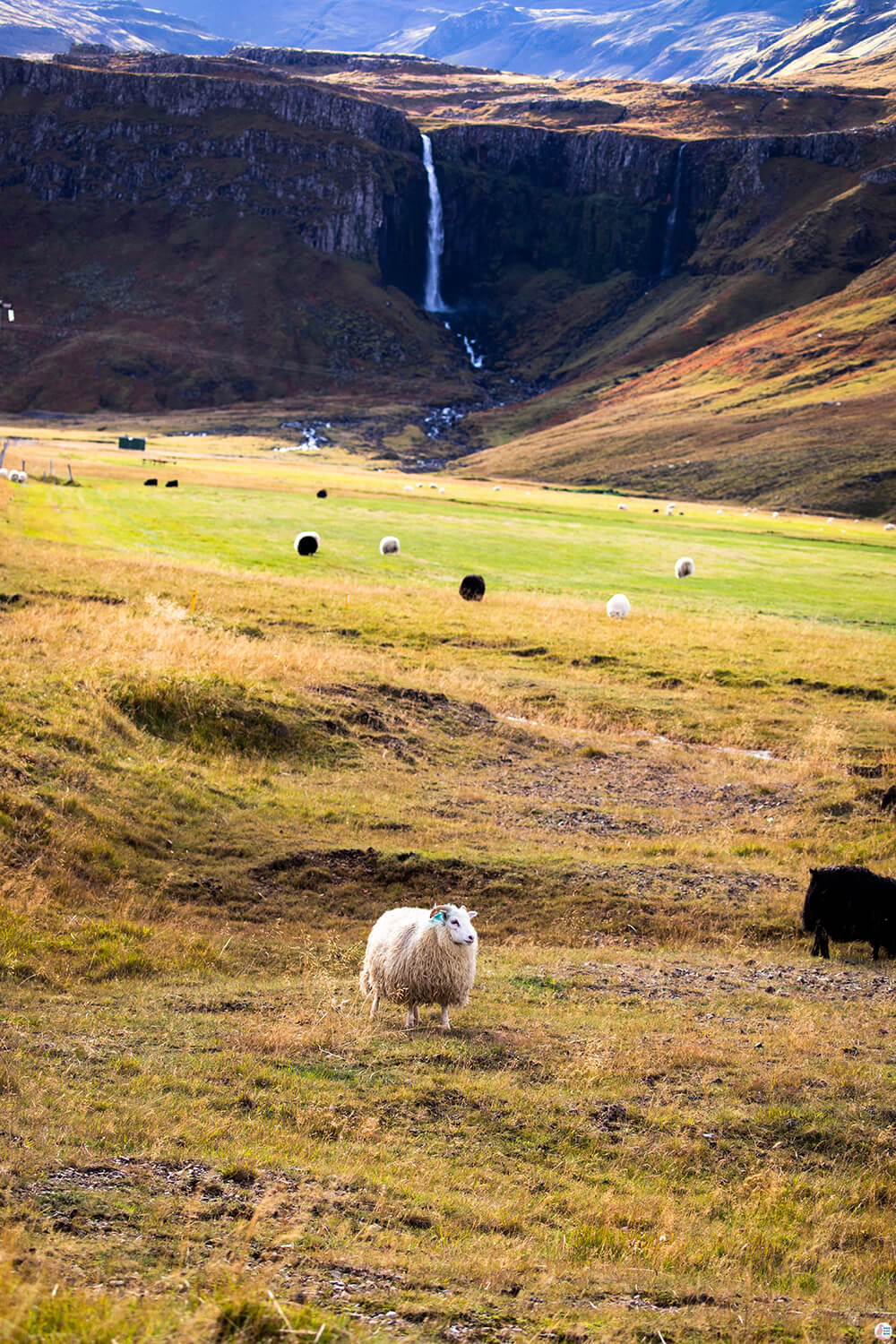 4. Kirkjufell view, just outside of Grundarfjörður

Just outside of Grundarfjörður, there is a small parking place with a different kind of view towards Kirkjufell. Here you can see the famous mountain's reflection in the water. The parking place is just 5 minutes away Kirkjufellsfoss. The picture below is taken by drone. 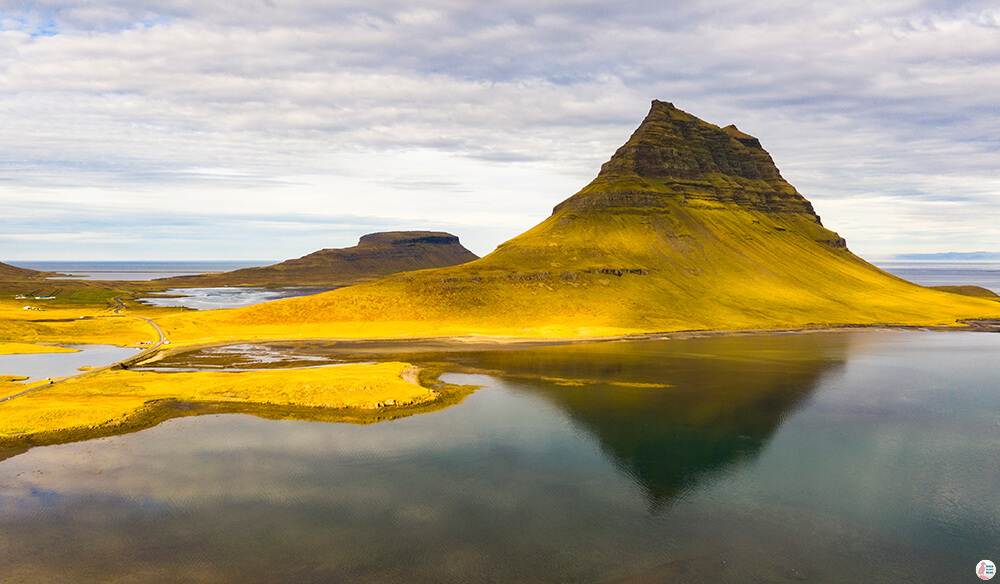 On the other side you can see another waterfall in the distance, Kirkjasfoss. 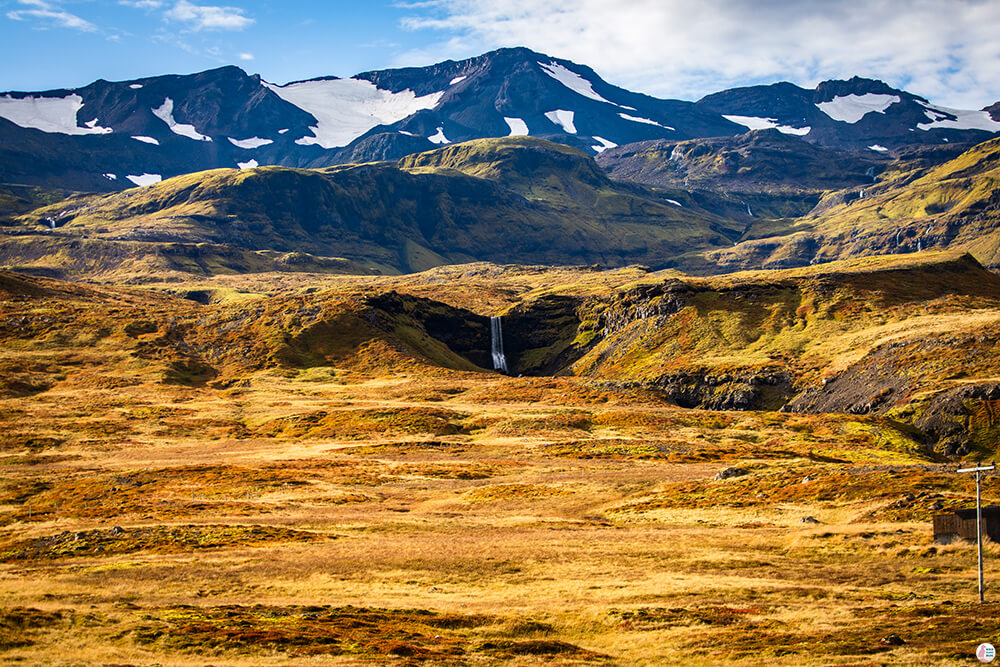 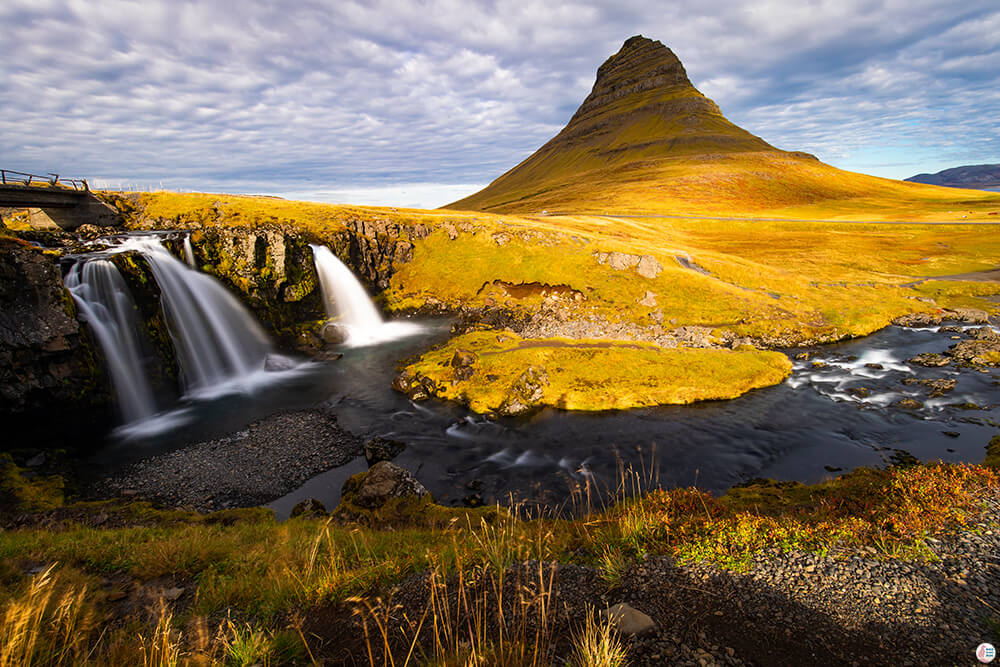 Kirkjufellsfoss and Kirkjufell mountain are the most photographed places in Iceland. I have waited for around one hour for the sun to come up and lit the mountain to be able to get the picture above.

I also came back later that day, after sunset, after my whole visit of the Snaefellsnes Peninsula. I was hoping to see some Northern Lights, but it was cloudy that evening. 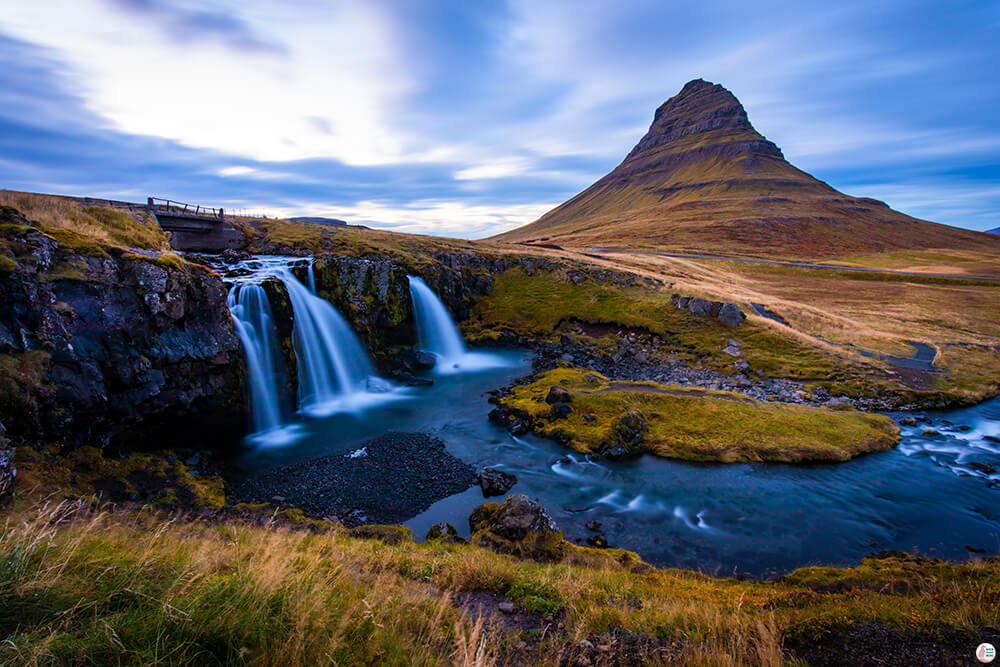 If hungry you can stop in Ólafsvík at a restaurant called Hraun. They had really good food and a nice staff.

The road goes around Snæfellsjökull, so there are many places where you can stop and take pictures of this great volcano.

Snæfellsjökull is a 700,000-year-old glacier-capped stratovolcano and it's the only large volcano in this part of Iceland. A stratovolcano means that the volcano is built by many layers of hardened lava and you can even see the layers in the picture below, taken from the other side of the mountain. 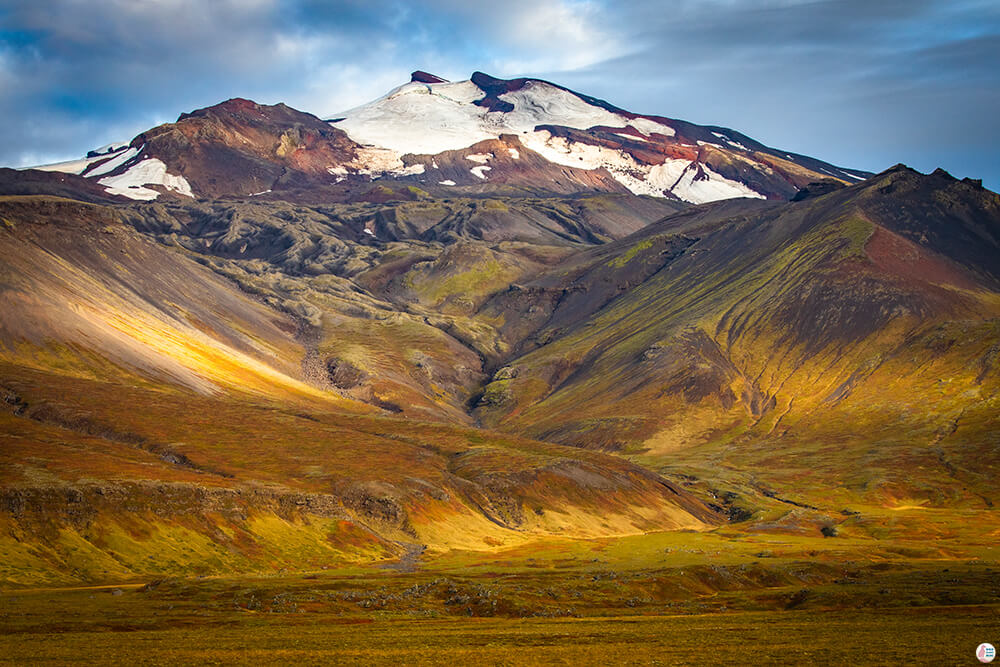 Snæfellsjökull is 1446 m high with a 120 km glacier at the top and its last eruption occurred around 1700 years ago. It was considered that Snæfellsjökull was an extinct volcano, but new evidence suggests that the volcano might still be active.

There are many hiking paths around the volcano and also some going to the top. Unfortunately I was time pressured, so I really didn't have time to do any hiking in the area.

Once you reach the south side, everything looks surreal. I was visiting Iceland in autumn and the whole surface looked orange, no trees in sight. The scenery looked almost like what I you see in documentaries when they picture the surface of Mars! 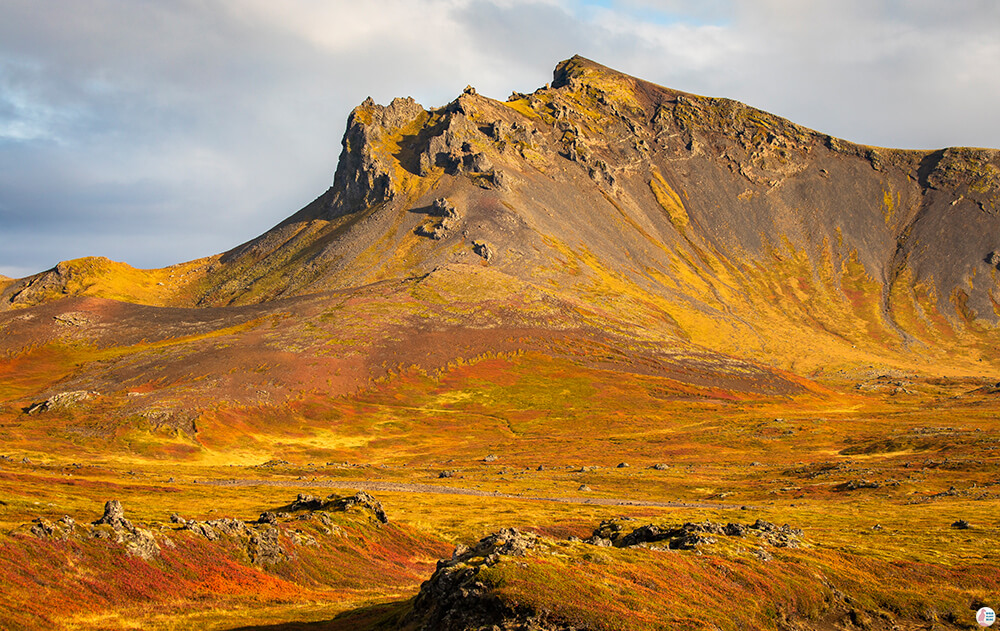 Djúpalónssandur is an extraordinary black sand beach with some incredible rock formations. To reach Djúpalónssandur you need to drive a narrow road for around 2 km, but the road is paved, so you can go with any type of car. 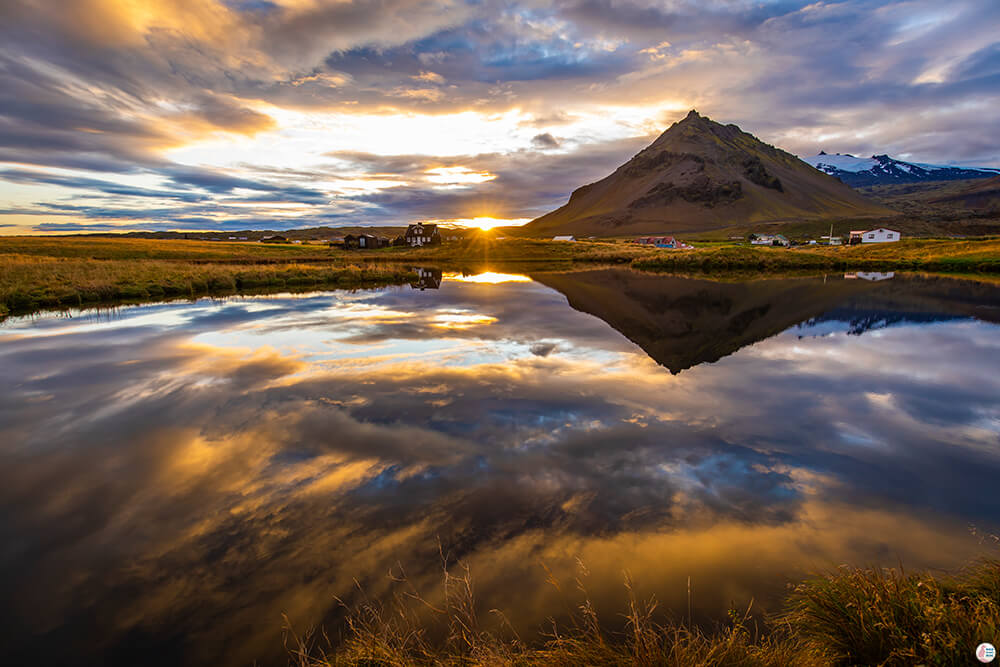 Arnarstapi was my favourite place from the Snaefellsnes Peninsula and the sunset here was amazing! Along the walking path, next to the shore, you can see more rock formations similar to the ones in Djúpalónssandur. The most famous of them is Gatklettur.

There is also a natural stone bridge, which is similar to the Gatklettur rock formation, but it is connected to land, so you can walk on it.

10. Just stop where you can

There are beautiful sceneries everywhere where you look, so you'll probably just stop every 10 minutes by the side of the road and take pictures. 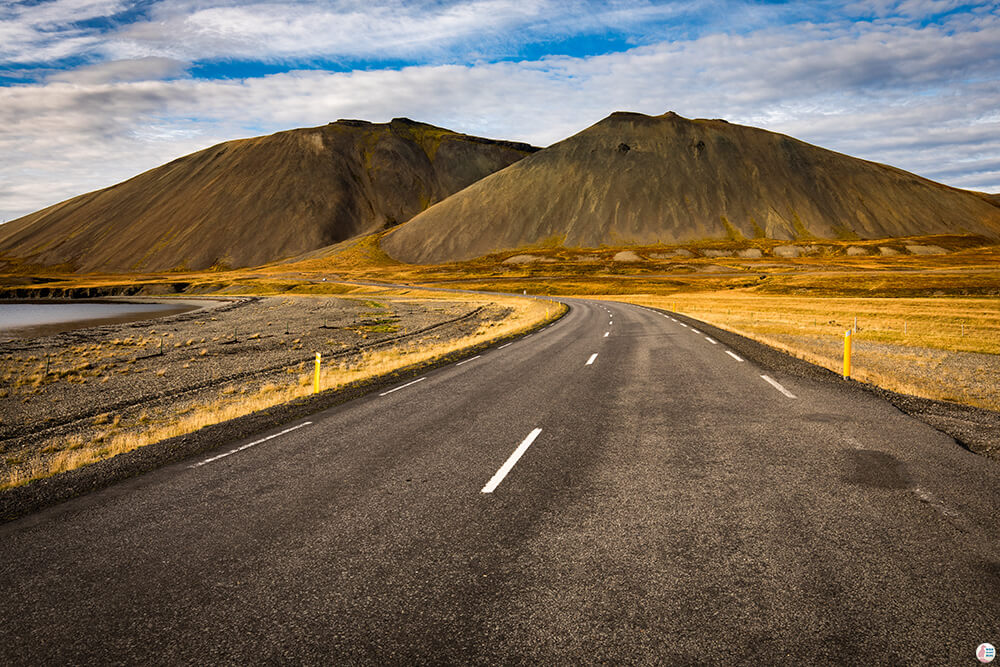 I really enjoyed my time on Snaefellsnes Peninsula and having a sunny day to see it all really helped! Even if I visited Iceland in autumn I actually had some pretty ok days, not too rainy and in West Iceland I even saw the Northern Lights on my last day. 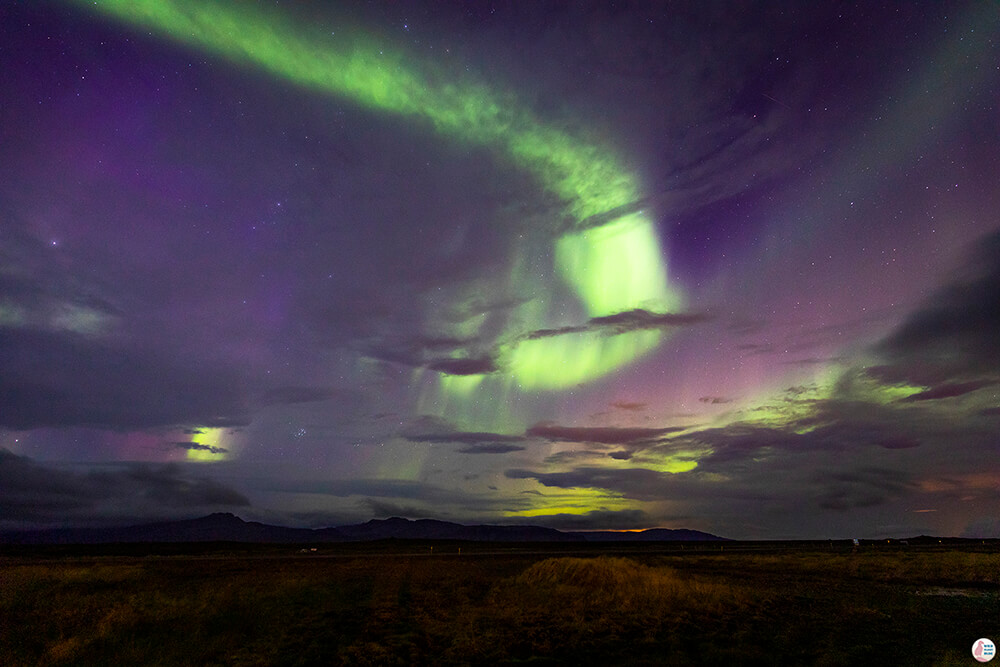