What is the Golden Circle?

The Golden Circle is a popular route in Iceland, which starts from Reykjavík, going all the way to Gullfoss and it includes some of the most famous spots in Iceland. Due to its close proximity to Reykjavík, this route is the most crowded in Iceland. The name “Golden Circle” comes from Gullfoss waterfall, which means “Golden Falls”.

There are three main attractions on the Golden Circle: Thingvellir National Park, Haukadalur Valley and Gullfoss.

The best time to visit Thingvellir seems to be autumn, when the colours of the trees and vegetation turn red, orange and yellow. I visited Iceland during the last week of September, which seems to have been the perfect time to see these autumn colours! 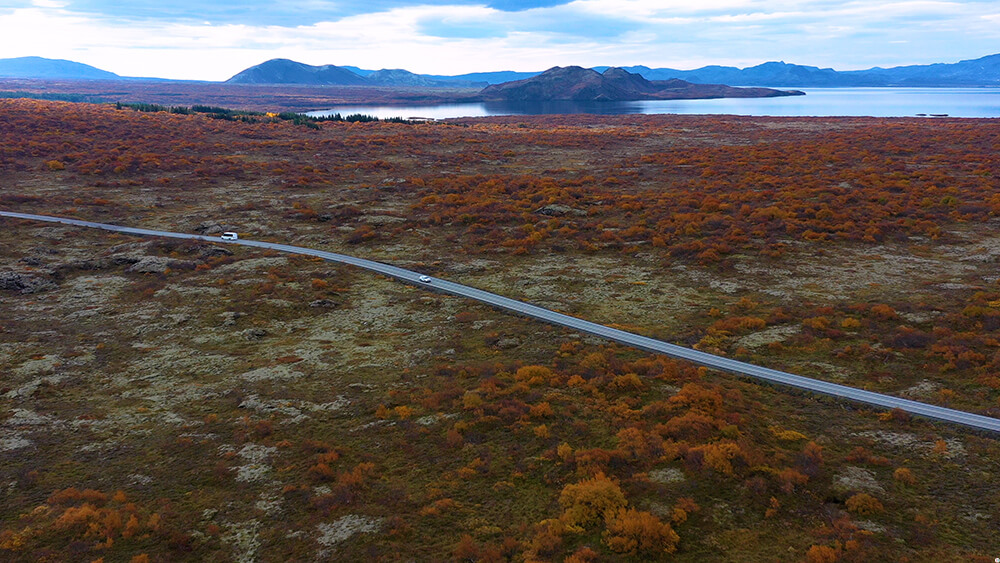 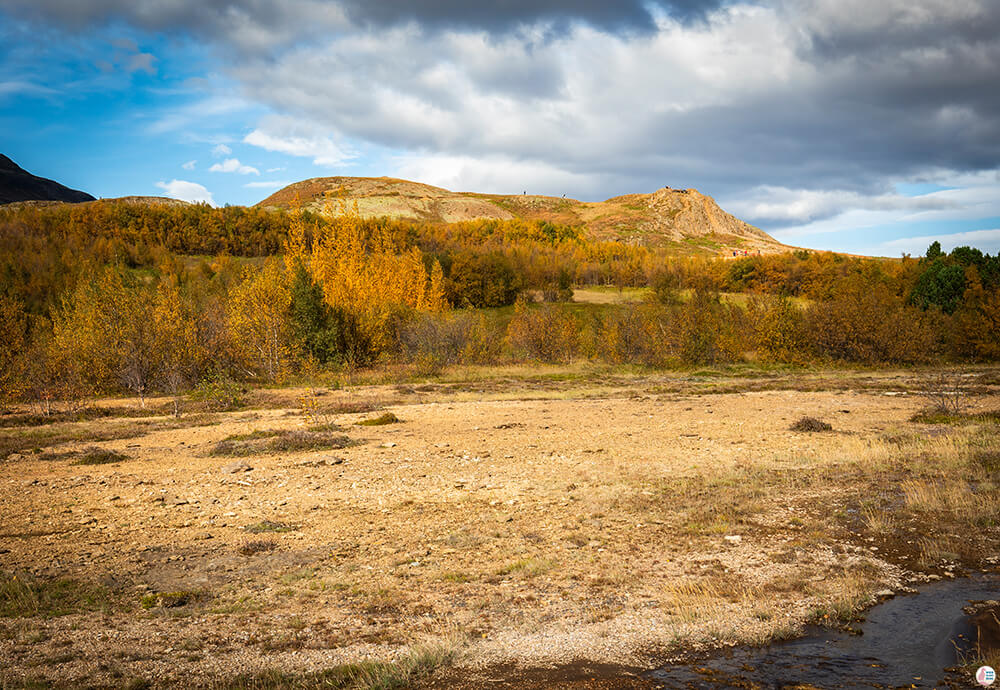 The most popular attractions in Thingvellir National Park are Öxarárfoss and Silfra.

Öxarárfoss is a beautiful waterfall along the Almannagjá gorge, which also marks the edge of the North American tectonic plate. 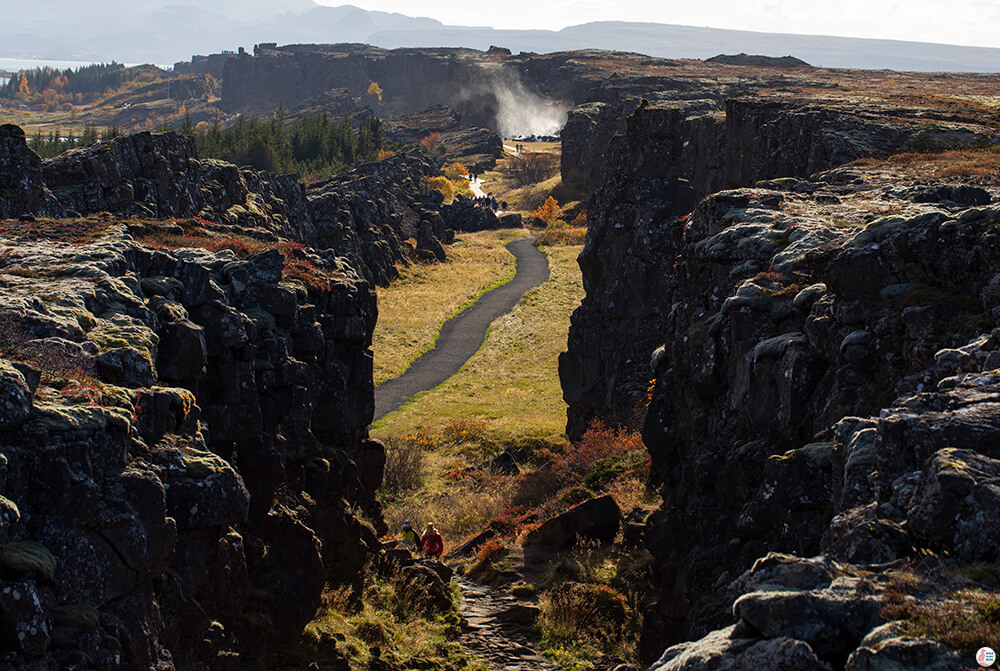 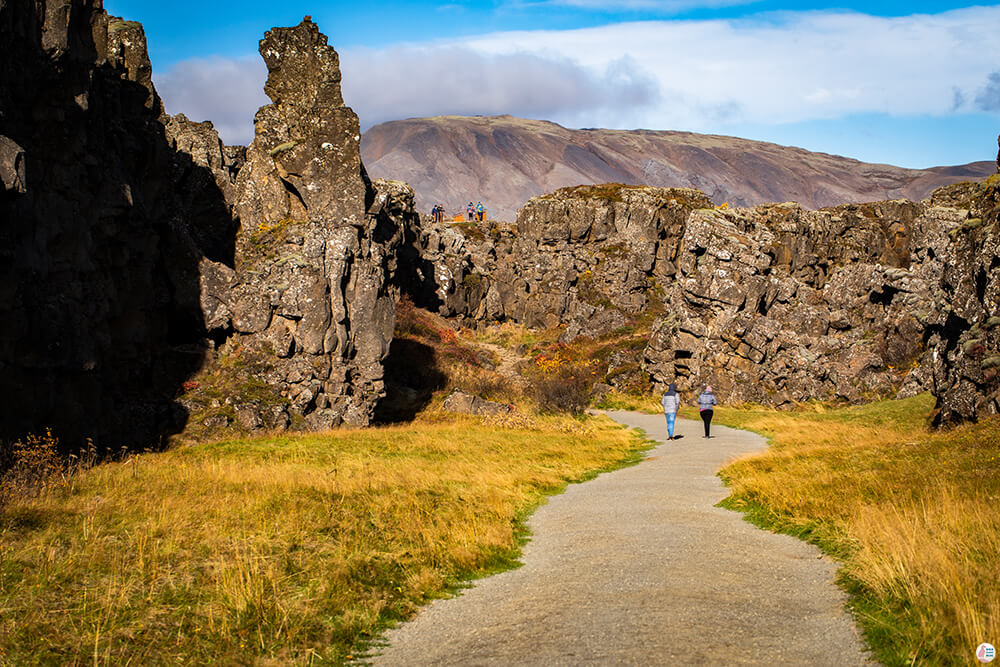 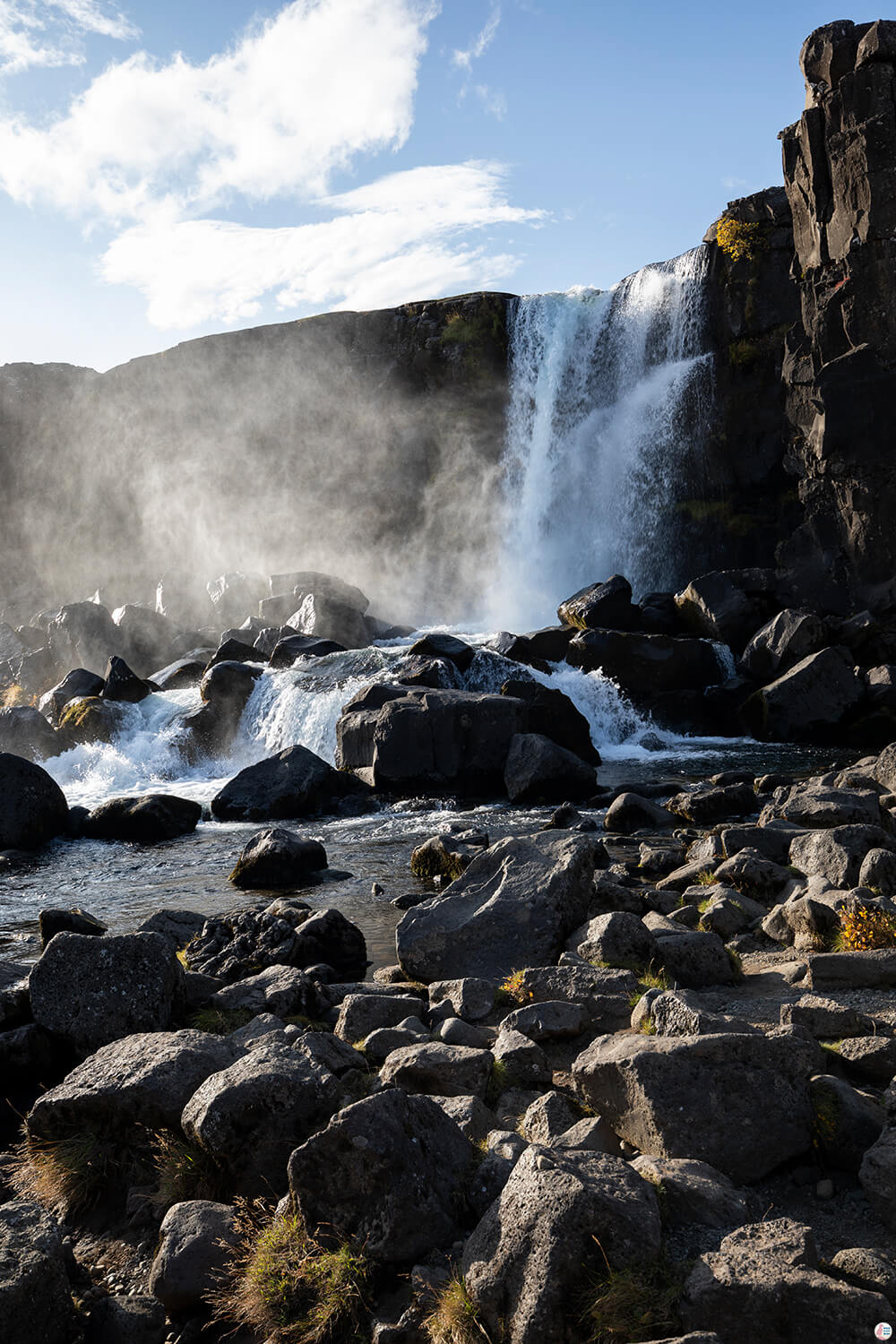 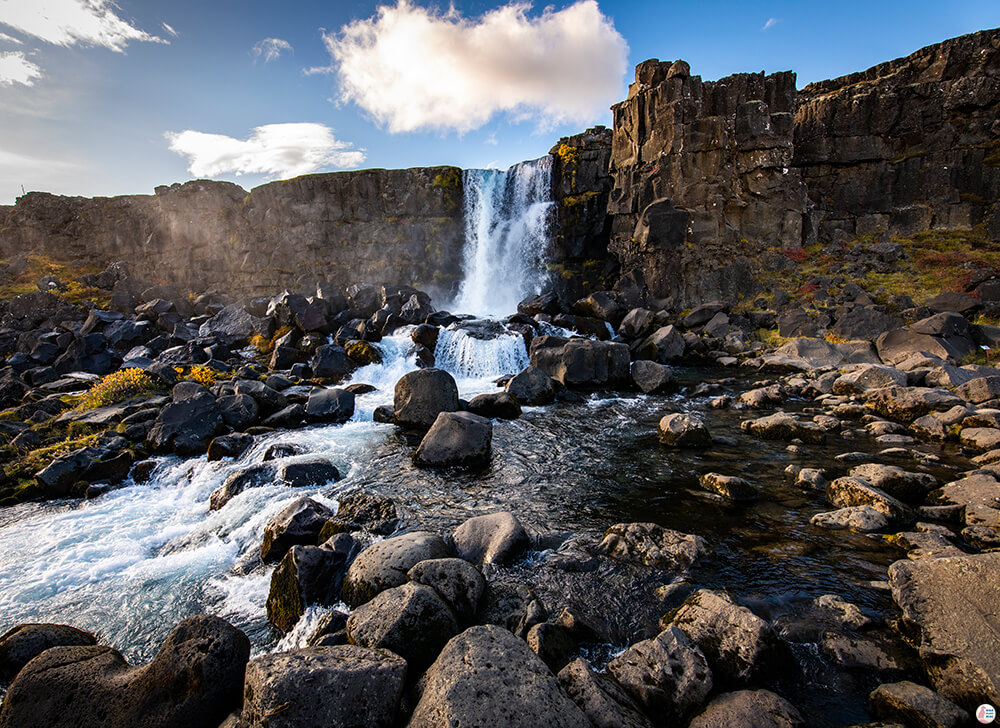 Very close to Öxarárfoss is Silfra, a popular diving and snorkeling place. If you enjoy deep blue waters and underwater caves this would be a great place for you! It is also known as the “dive between continents” because Silfra is a fissure between North American and Eurasian tectonic plates. The continents drift apart about 2 cm per year. Since you need a diving license to do this, I had to skip this part on my Golden Circle route.

You can also stop and admire lake Thingvallavatn (Þingvallavatn), which is the largest natural lake in Iceland, with a surface of 84 km² and a depth of 114 m. 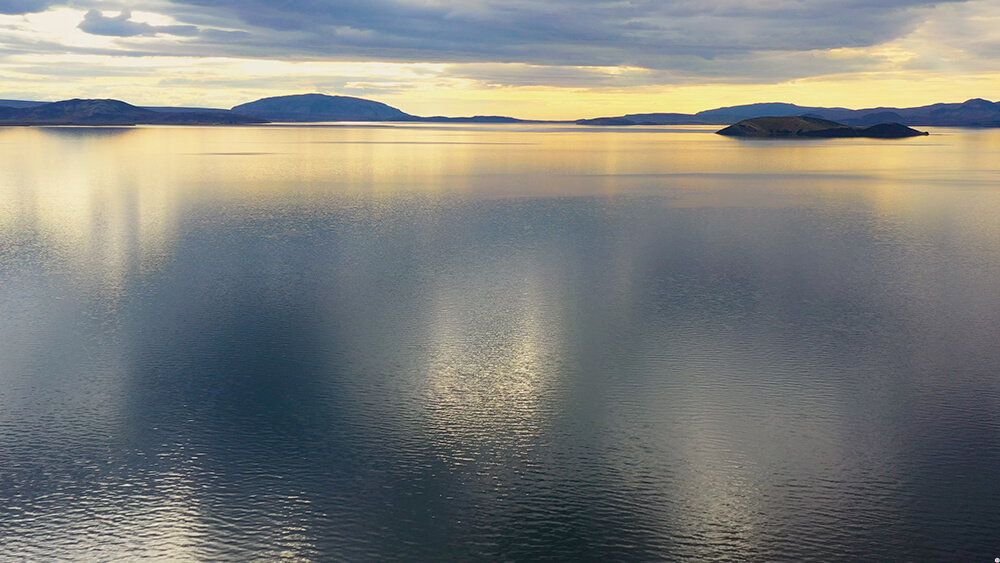 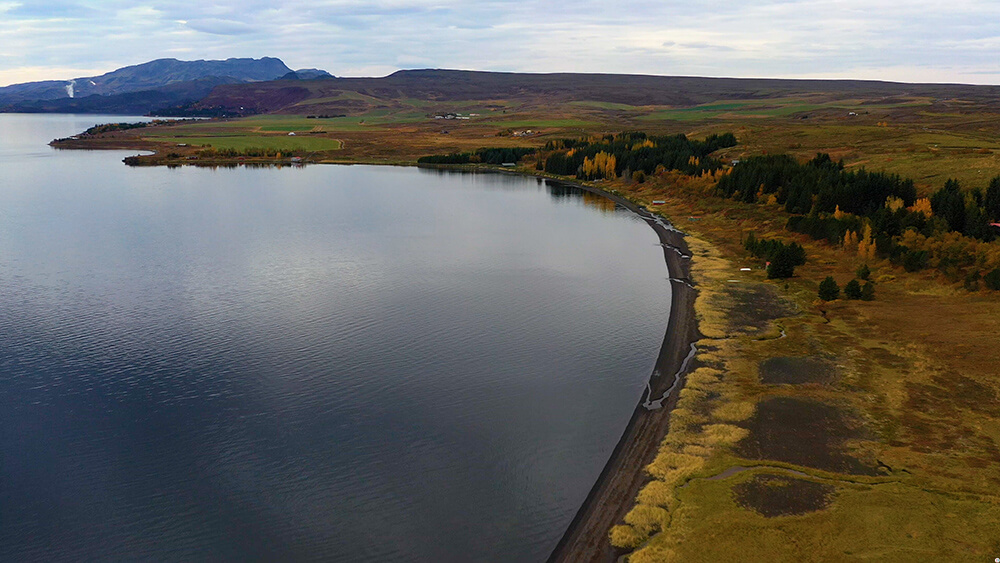 Next important stop on the Golden Circle route is the Haukadalur valley, with its famous geothermal features: the geysers! The most popular of them all are Geysir and Strokkur. 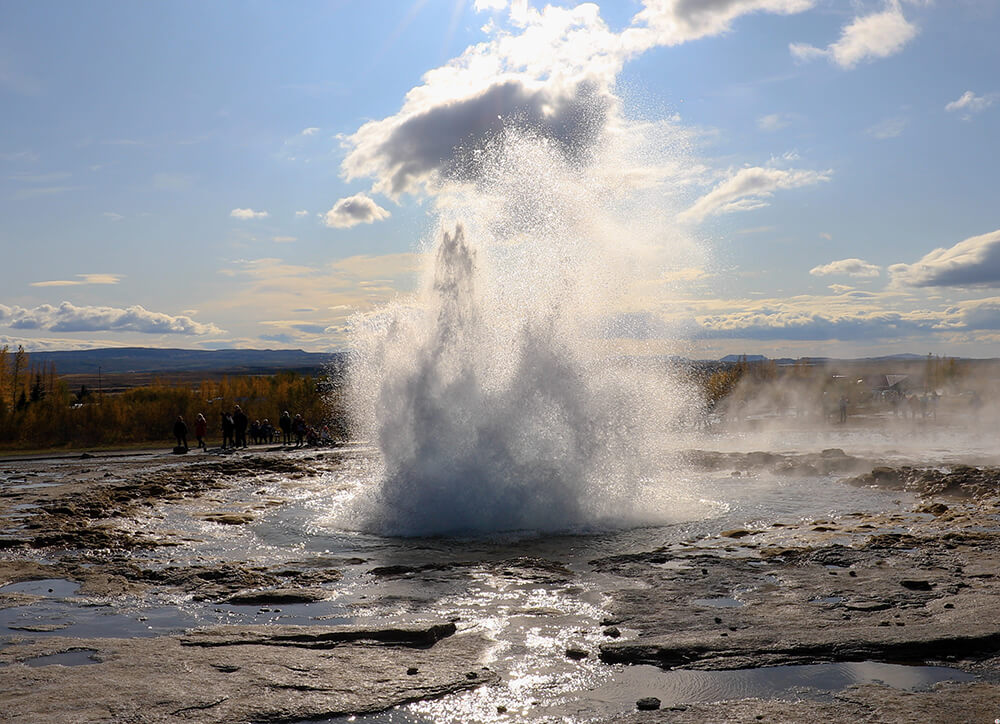 Haukadalur valley is the most popular tourist destination in Iceland and there is a big parking place before the entrance to the valley. There are restaurants where you can stop to have something to eat after you have admired the great geysers!

When you enter the valley, you will see steam all over the place and it will also smell like sulfur. The geysers are really hot, so you should stick to the paths!

The one that will captivate your attention is going to be Strokkur and you will quickly recognise which one it is from the massive crowds around it. Strokkur erupts regularly, every 6 – 10 minutes. While visiting the valley I have seen Strokkur erupt at least 5 times! Sometimes the eruptions are more impressive than the others, with some of them reaching even 40 m height! 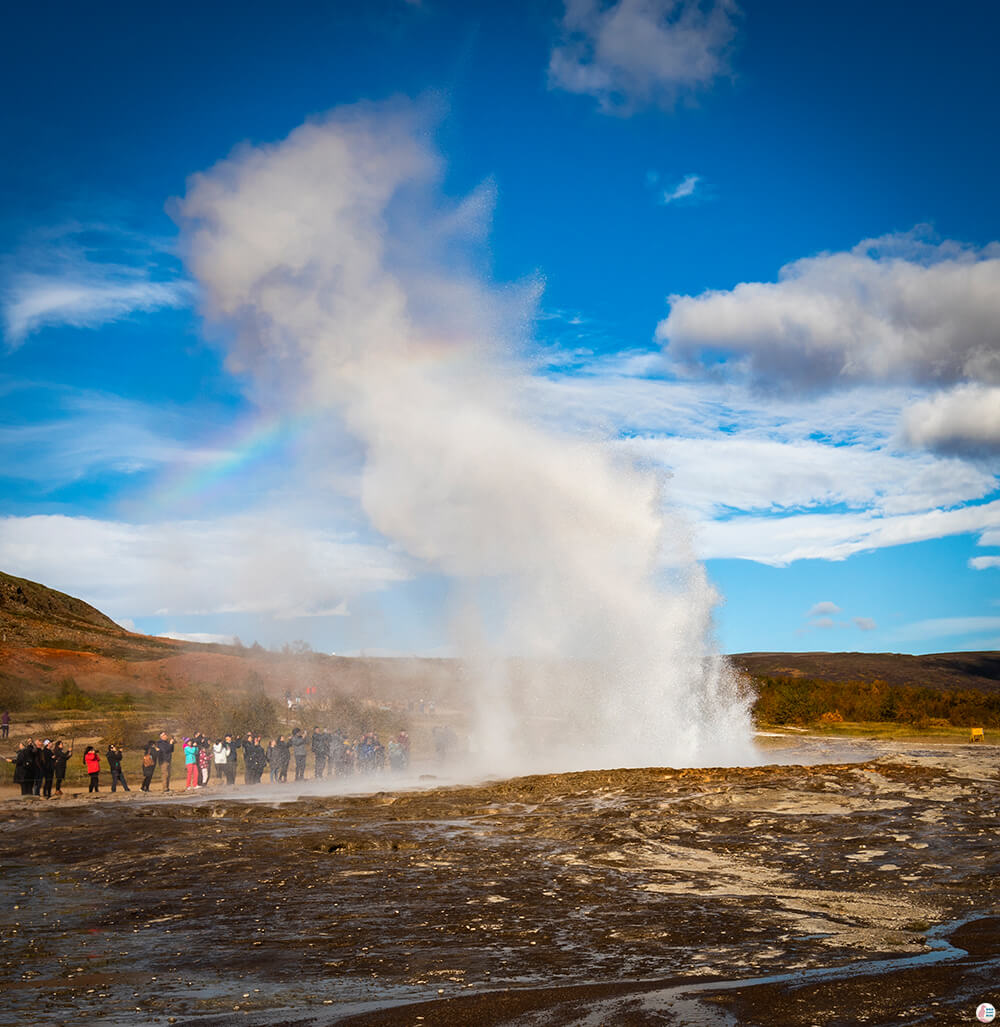 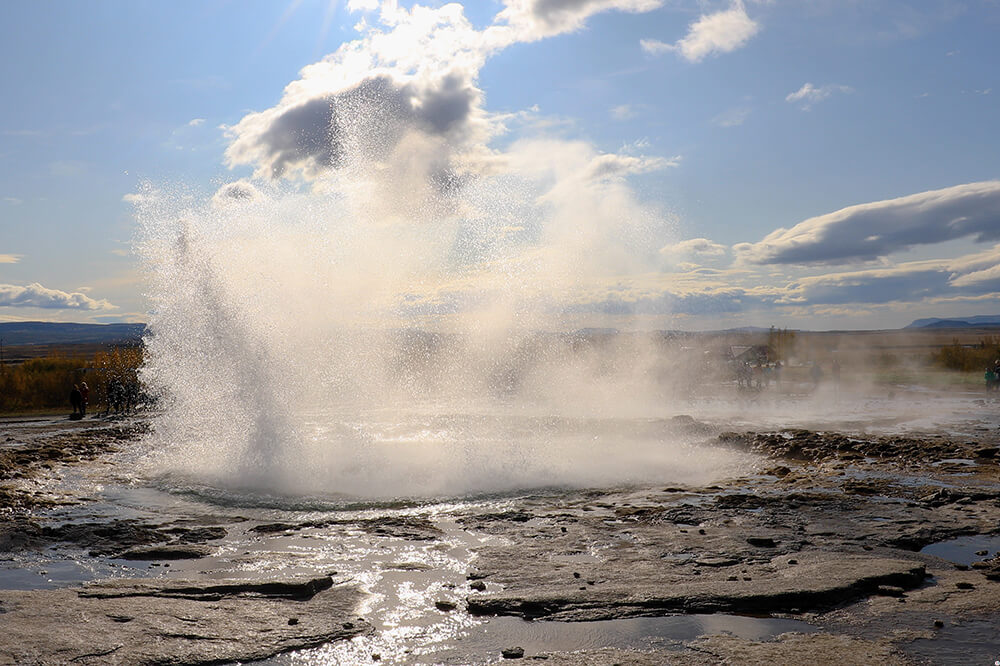 It’s bigger neighbour, Geysir, is less active and probably you won’t see it erupt while visiting the valley. Sometimes the eruptions stop altogether for years at a time, however when it does erupt, it can blow water in the air up to 70 m high! An earthquake in the year 2000 made Geysir very active, reaching 122 m height for 2 days, when it would erupt on average 8 times a day. Nowadays, Geysir is mostly dormant, but it did give raise to the name “geyser” all over the world. 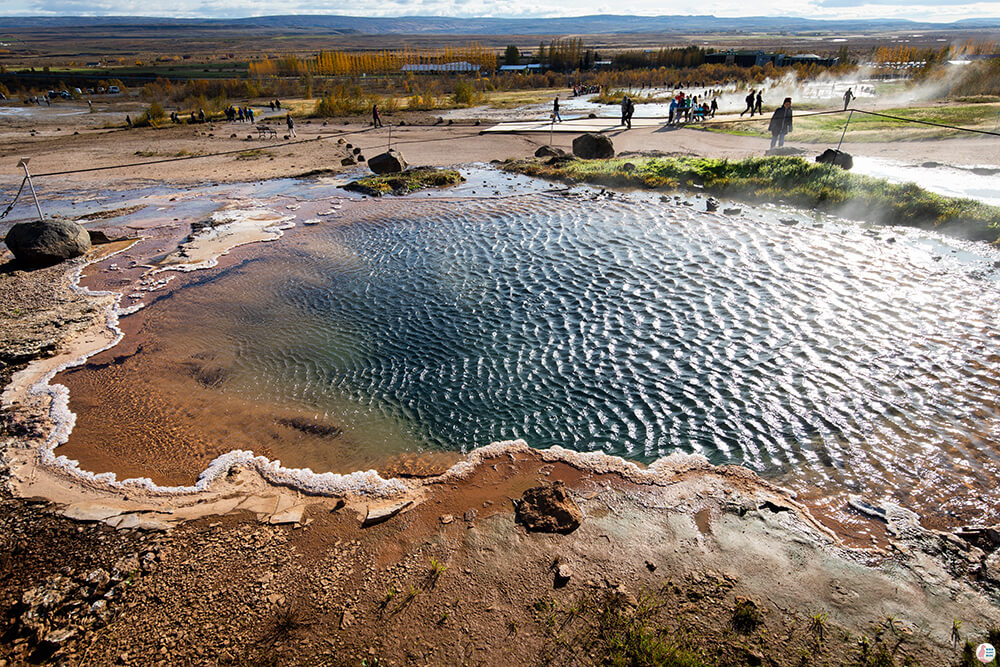 You can also hike around the area, in particular on Laugarfjall mountain, where there is a viewpoint over the entire area. 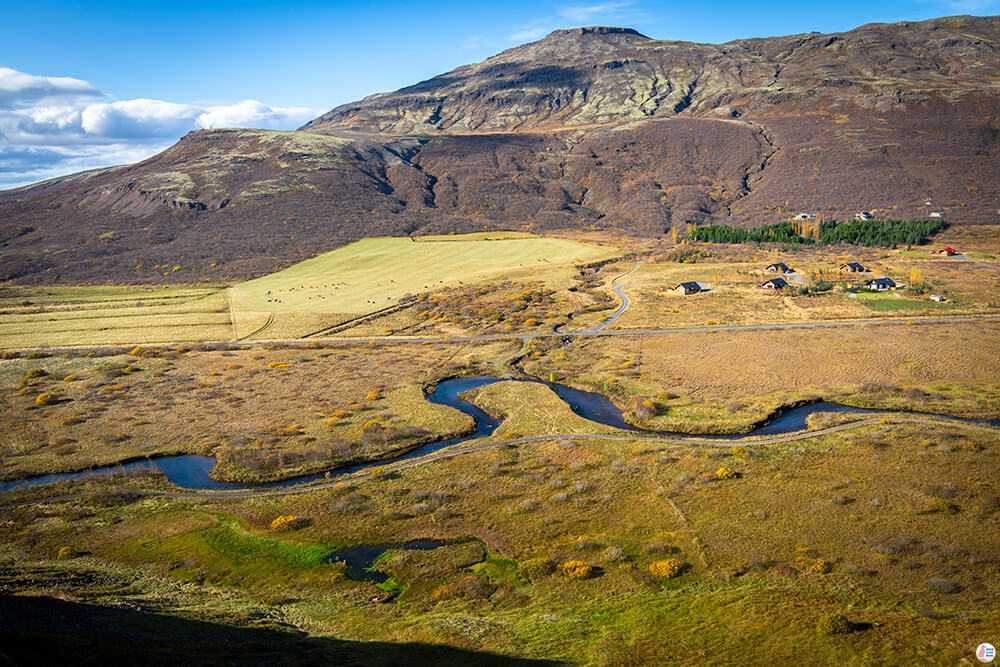 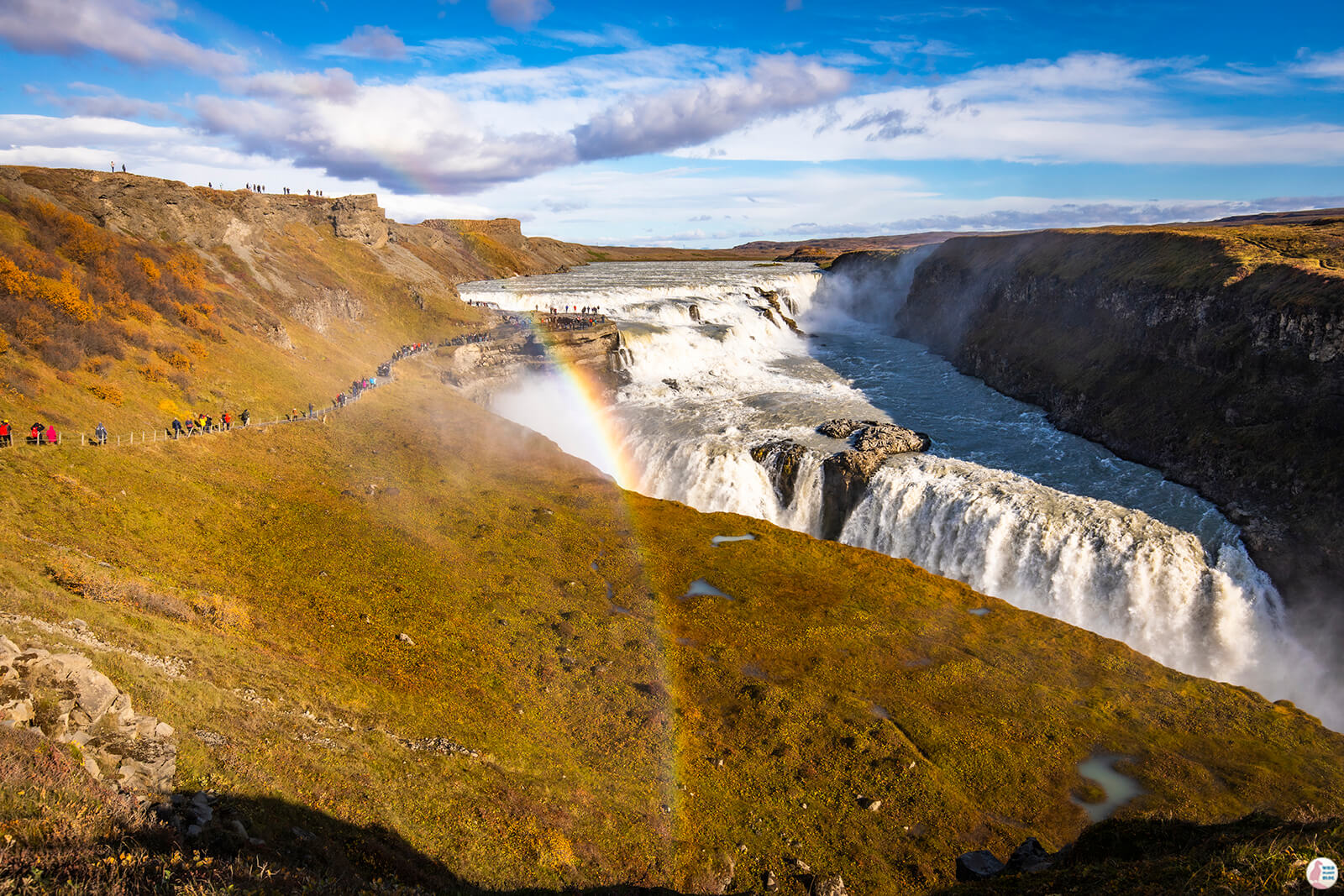 Gullfoss waterfall is what gives the “Golden Circle” its name, translating to “Golden Falls”. This magnificent waterfall is Iceland’s most iconic waterfall, visited by most tourists coming to Iceland.

The waterfall is situated in Hvítá river canyon and its water comes from glacier Langjökull, where you could also go on ice cave tours and snowmobiling.

The waterfall has 2 cascades, the first one with a drop of 11 m and the second one 21 m. It is believed that the Hvítá river canyon was formed by glaciers at the beginning of the last ice age. 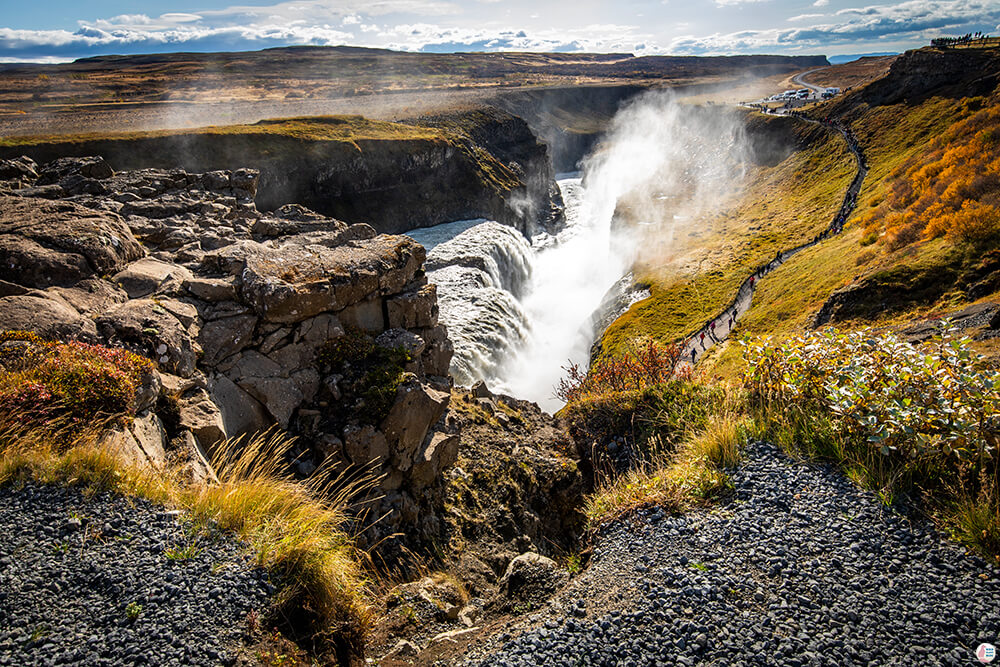 There are numerous paths along Gullfoss, with one path leading very close to the mighty force of the water! Be prepared to get completely soaked when walking there! I would recommend getting a rain coat while visiting the waterfall this close and not take your precious camera with you, as you probably cannot get a decent picture anyway because your lens will be constantly filled with drops of water. Your phone and your GOPRO cameras are much better equipped for filming Gullfoss up close! 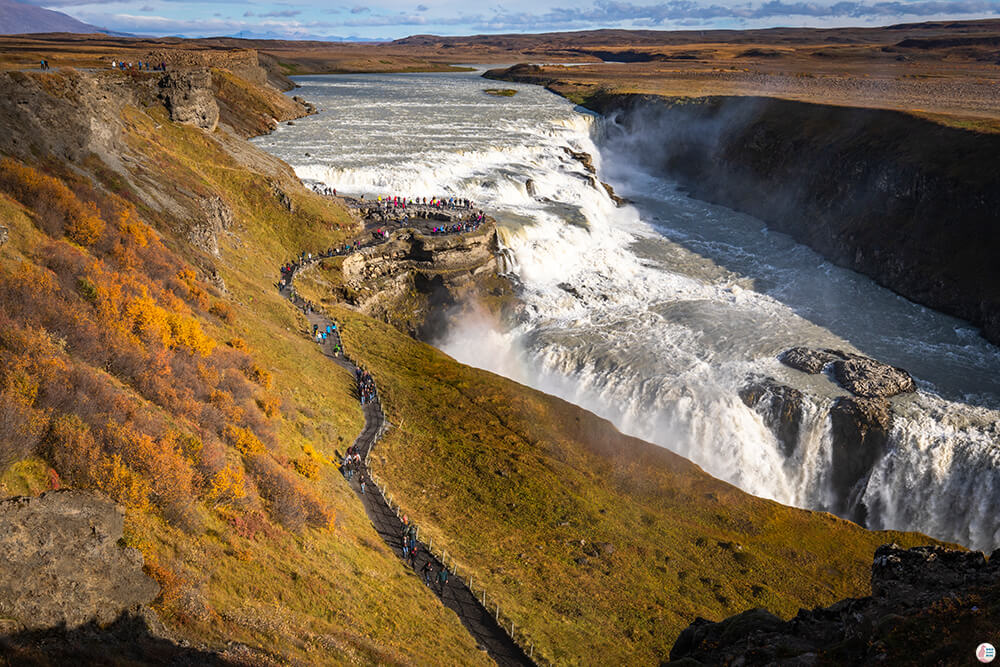 Depending on how long you have spent exploring so far, you might still have some time left to go visit another iconic Icelandic waterfall: Seljalandsfoss! 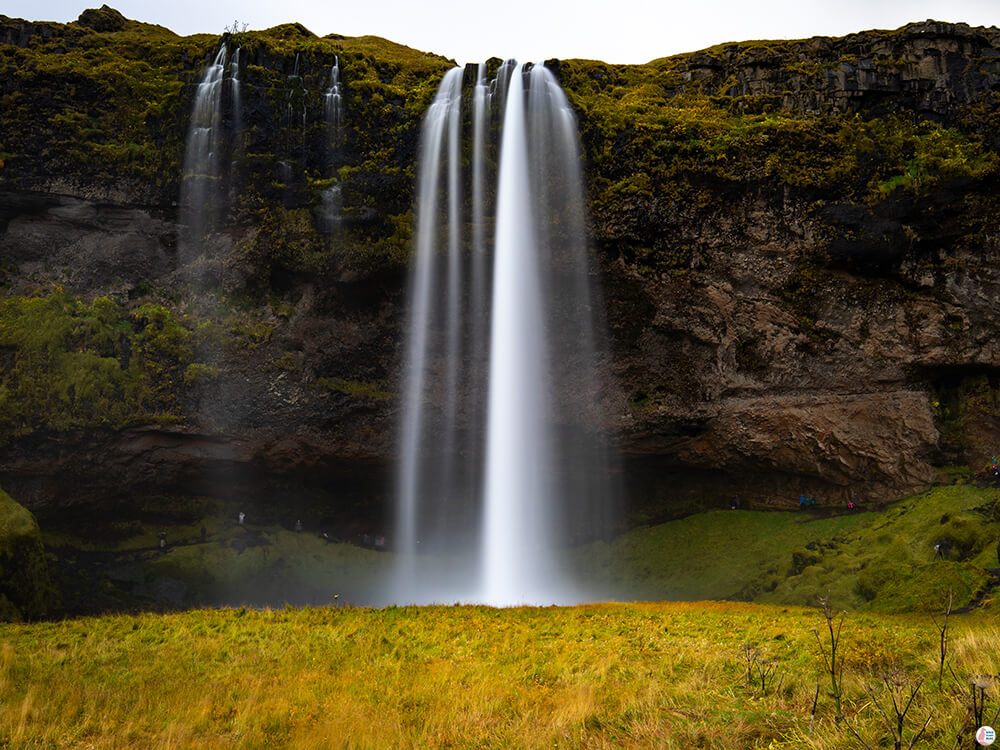 The drive to Seljalandsfoss from Gullfoss takes approximately 1h 36 min and if you are visiting Iceland during the summer season, there is plenty of time to drive there and then head back to Reykjavík! Seljalandsfoss is not part of the Golden Circle route, but it’s really worth the drive! This waterfall is the most photogenic waterfall in Iceland, mostly due to the fact that you can walk behind it! Seljalandsfoss originates from the volcano glacier Eyjafjallajökull and has a drop of 60 meters! 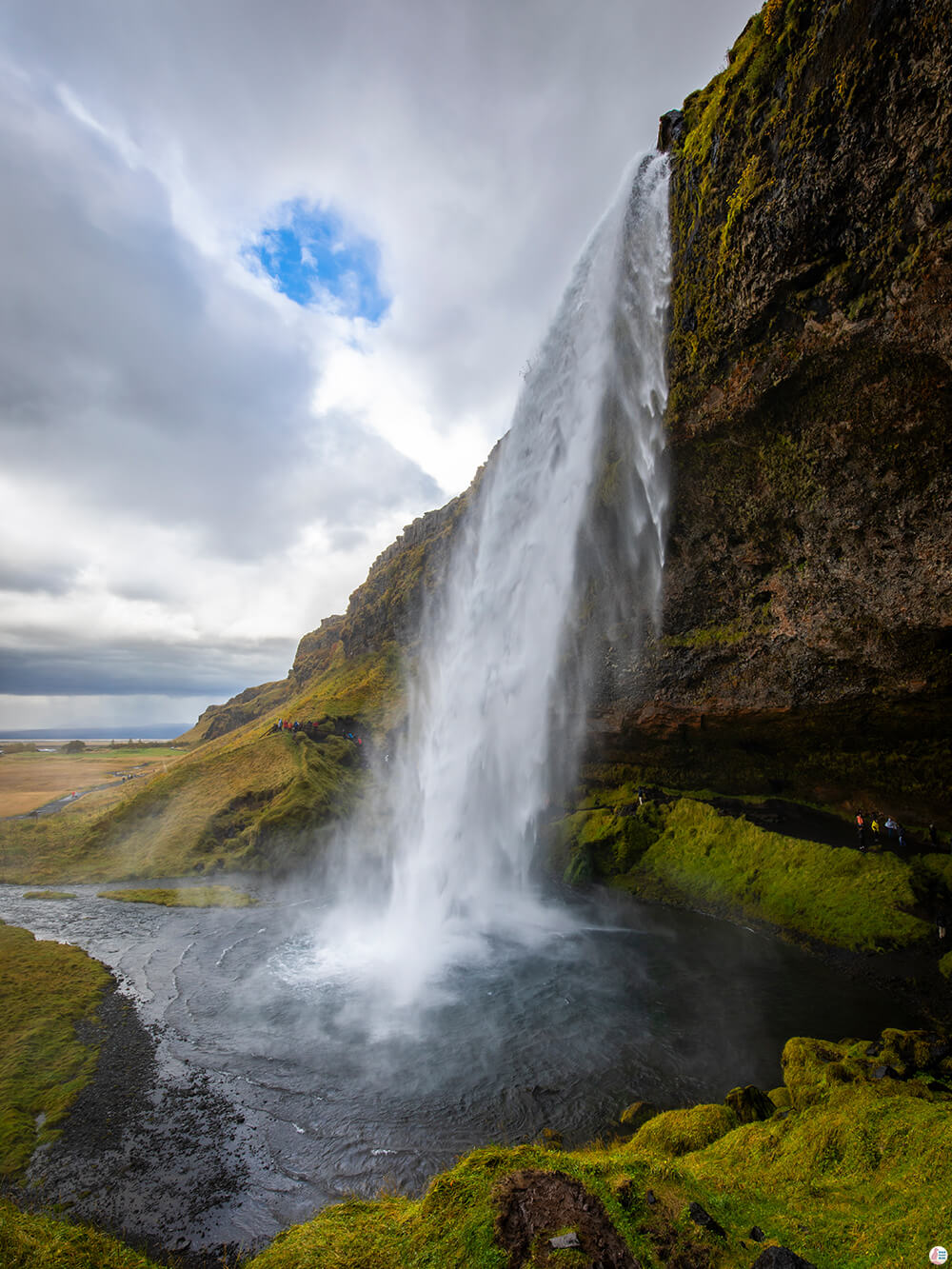