The Phi Phi Islands in Thailand are always advertised as paradise islands, however when I first arrived here in 2016 I must say it was far from it! During corona time in 2020 I revisited the islands and managed to see a glimpse of how beautiful these islands could really be...

The Phi Phi Islands are a group of islands in the Andaman Sea, located between the big island of Phuket and the island of Ko Lanta. Ko Phi Phi Don is the biggest of the Phi Phi Islands and the only one that is inhabited. Ko Phi Phi Le is the second largest island and even though it's not inhabited it has become one of the most visited places in Thailand, due to the famous Maya Bay. Maya Bay has become very famous after the movie "The Beach" was released in 2000.

I originally thought that the environmental issues started after the movie was released due to huge number of tourists visiting the bay, however, after some reading, I am shocked to find out that this has began before the production of the movie. Fox decided that the island was not "paradise enough" and started bulldozing the island, cutting coconut trees and widening the beach. I guess one silver lining here is that Fox also removed 5 tonnes of garbage left by tourists. Nevertheless, the damage made by tourists afterwards was far greater and the bay closed in 2018 until the rehabilitation of the bay is complete. A few months after the island was closed down, marine biologists observed black tip reef sharks returning to the bay, which just shows how nature starts to reclaim "itself" in such a short period of time. The coral rehabilitation is fully organic, with no artificial nor man-made materials being introduced.

I had the opportunity to visit the Phi Phi Islands 2 times: one time from Phuket in March 2016 and another time from Krabi in March 2020, just before the corona epidemic struck. The 2 experiences I had were very different. 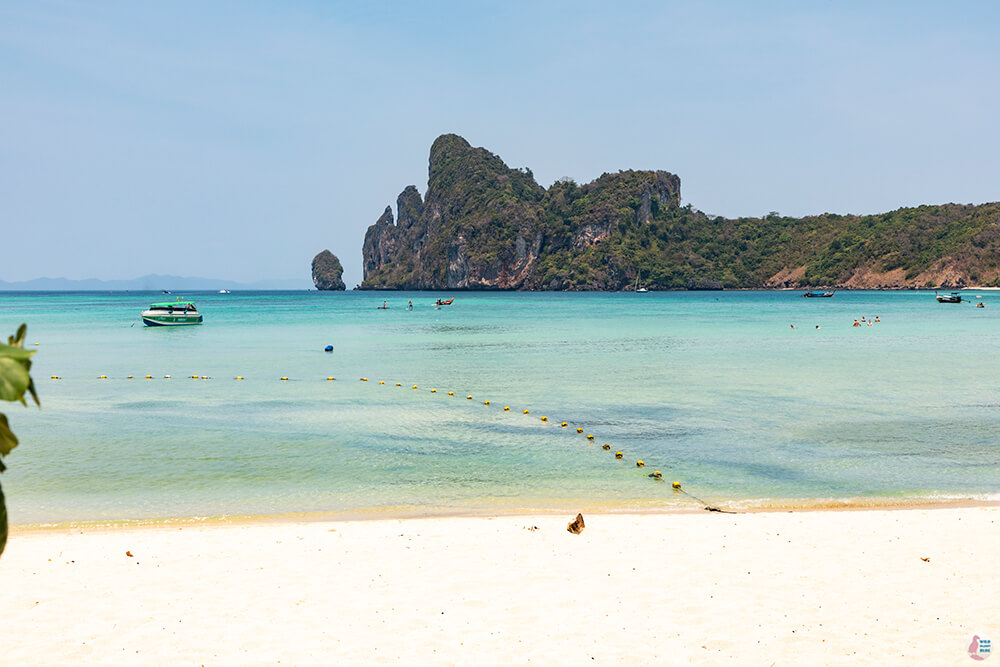 First experience was from Phuket with a speed boat and I must say it wasn't exactly what I was expecting. When I was reading that there are no cars on Ko Phi Phi Don I was quite relieved, thinking that it will be so nice to walk around without the nasty smell of cars, but I never took into considerations the number of boats around.

The islands are absolutely stunning, however when you cannot breathe due to exhaust gas coming from too many boats, things take a bad turn. I actually remember feeling quite ill from the air and literally had to run away from all the boats as soon as our boat docked on Ko Phi Phi Don, only to get "stuck" because of the sheer number of people on the island. I tried walking a little, but being in huge crowds and trying to walk is not really my "thing" and in the end I just abandoned. Tried to find a place where I could at least enjoy a fresh coconut, but that was also out of "reach", as all the places were already full. In the end we just spent most of our time waiting for our boat to return so that we can finally get away. I wish I would have taken some pictures back then in order to show you the differences, but I really didn't want to take pictures of people.

Back then, Maya Bay was open, however our tour couldn't really go there as the whole bay was completely full of people. It looked quite horrific actually and I am really glad our tour guide decided to skip this "must see" place.

Despite all of the above, the boat ride around the smaller Phi Phi Islands was pretty great, with the some really awesome limestone formations! Here below is a picture without too many boats from 2016. I remember very vividly this awesome colour of the water! 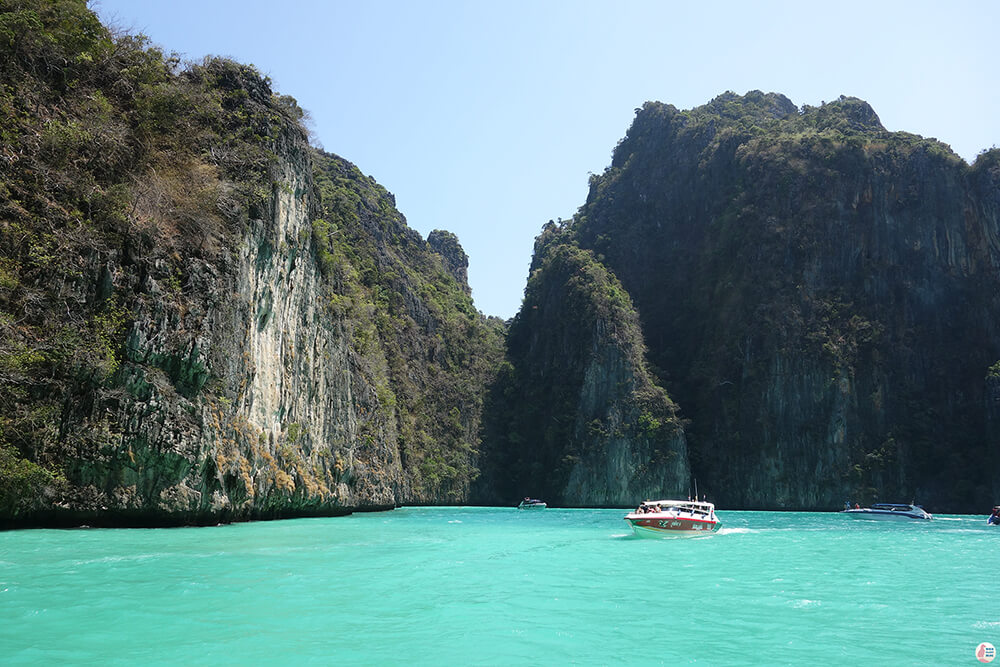 Second time I have visited Thailand I decided to go to a less touristic place, Krabi. I don't know was it the corona or what, but this holiday was actually amazingly beautiful. There were tourists still, but the normal amount. Being a bit quieter, I decided to give Phi Phi another go in hopes that this time I can actually get to enjoy the islands without cursing every 2 minutes.

Turns out corona has made the Phi Phi Islands breathable again! When we arrived there were so much less tourists and boats and I could definitely see why these islands were called "paradise islands". Even with perhaps half the amount of tourists before the corona, the bay at Ko Phi Phi Don was still quite crowded, so you can imagine how it must have been before. 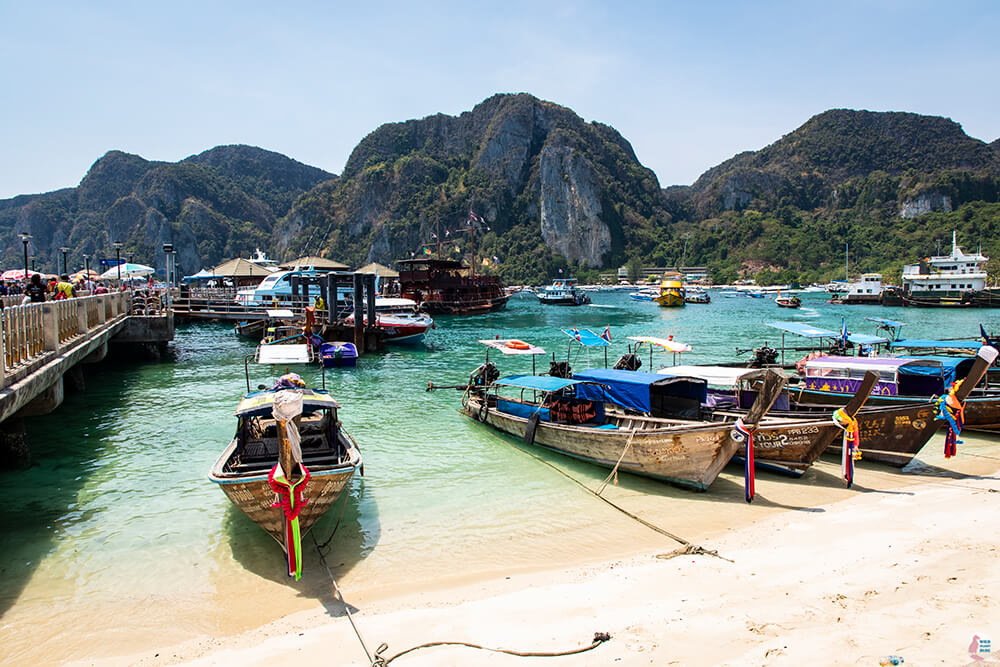 We only had 1 h and a little bit to spend on the island, so we quickly got out of the boat and went straight to the viewpoint. We hurried up to get there and it took us around 50 minutes to get to the viewpoint and back. On a very hot and sunny day this was a bit of a challenge. There are around 3 km from the peer to Viewpoint 2, which doesn't sound like much, but I had 2 bottles of water with me and I felt like this wasn't enough. I recommend downloading maps.me to get an accurate trail to the viewpoint, as it is really easy to lose your way on the small streets. There were many stairs standing between us and the viewpoint, but the viewpoint is really worth the effort and look below, barely any people this time :) 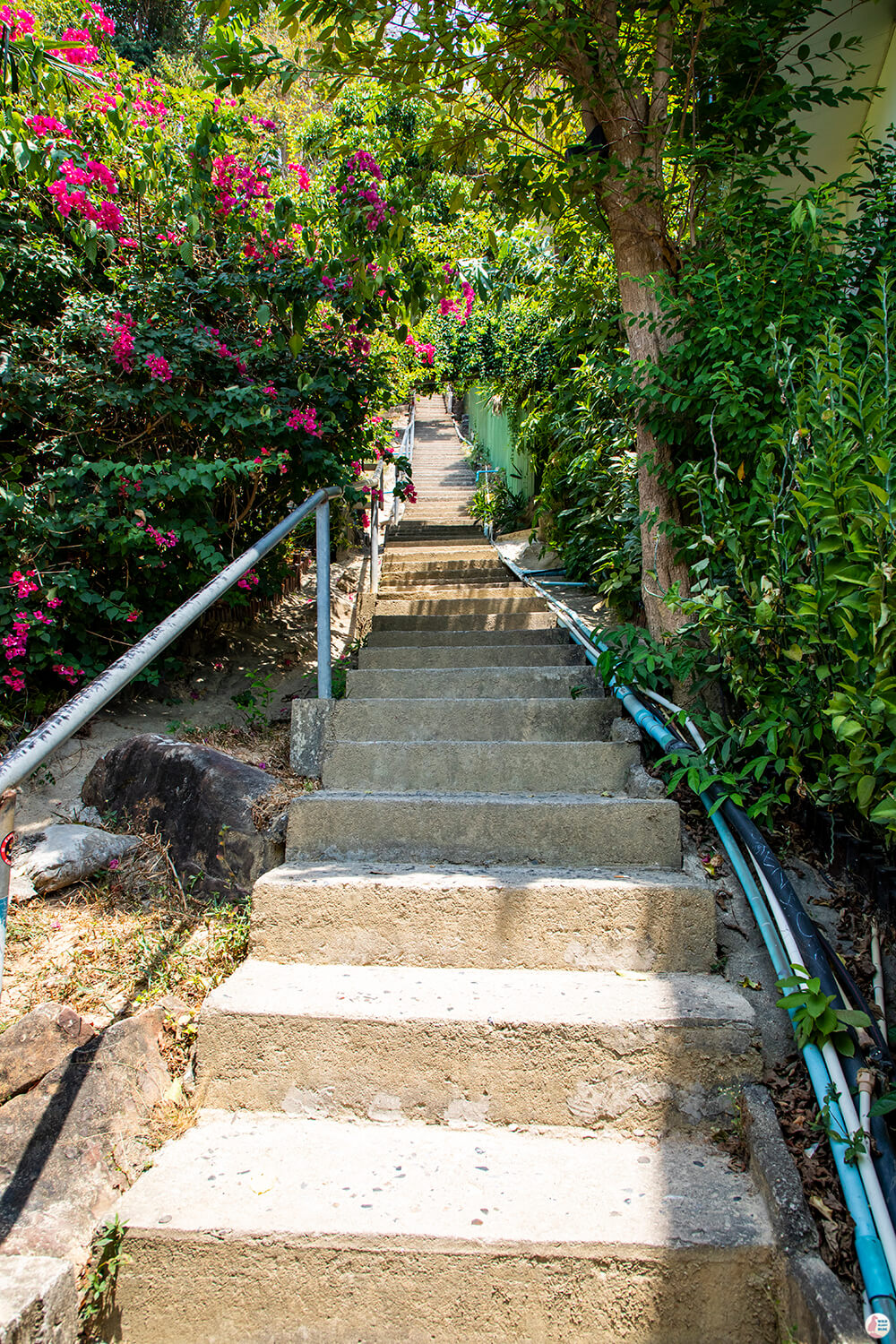 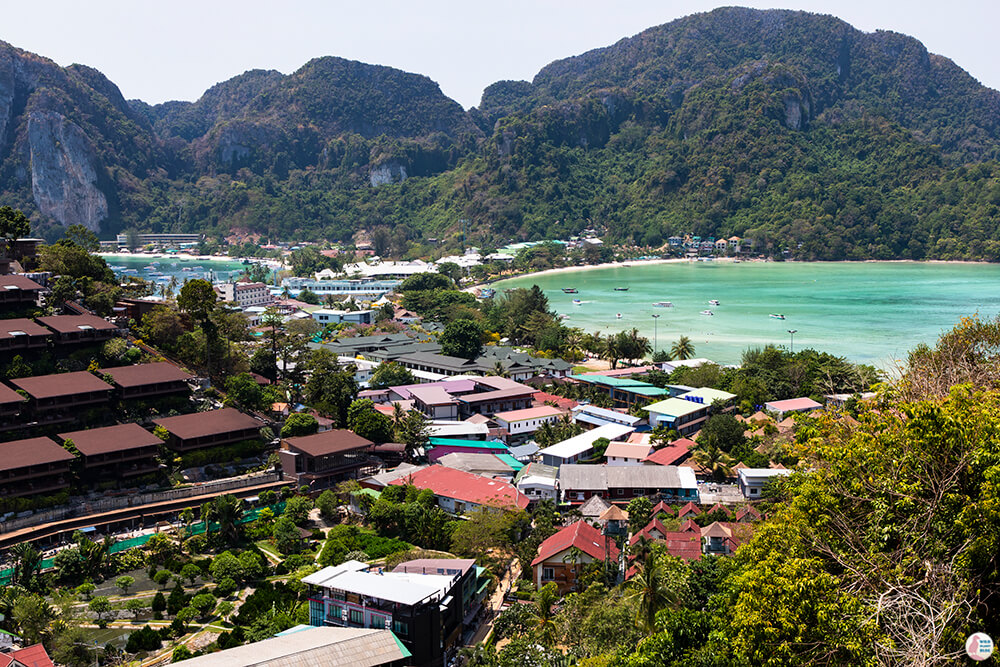 From the first viewpoint you need to continue about 400 m to the second viewpoint. Unfortunately it's still up hill, but no stairs anymore. When we reached Viewpoint 2 we were relieved for a few minutes and enjoyed the beautiful view. 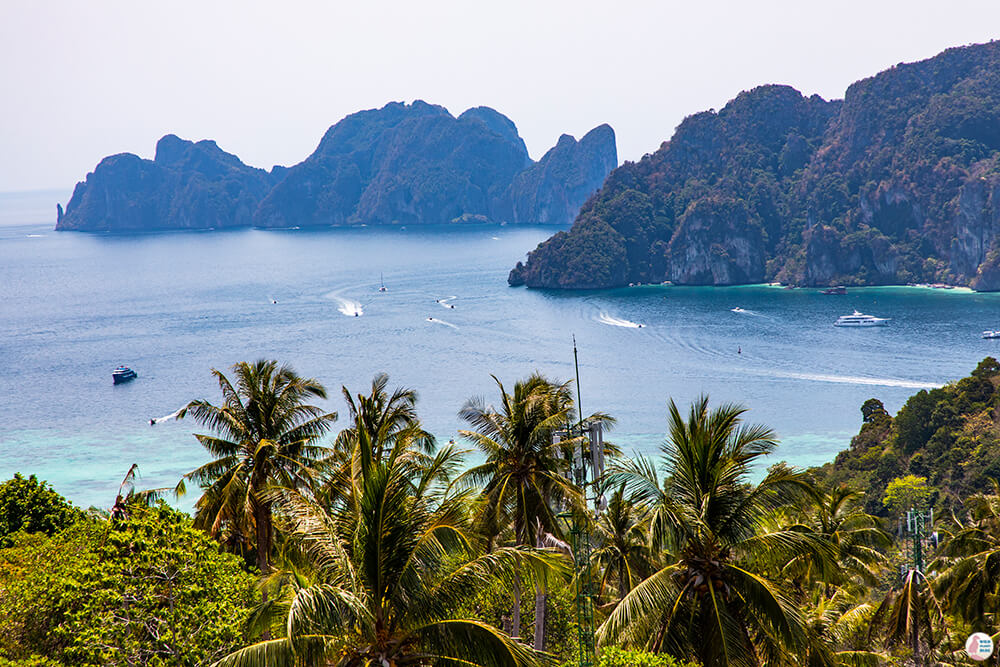 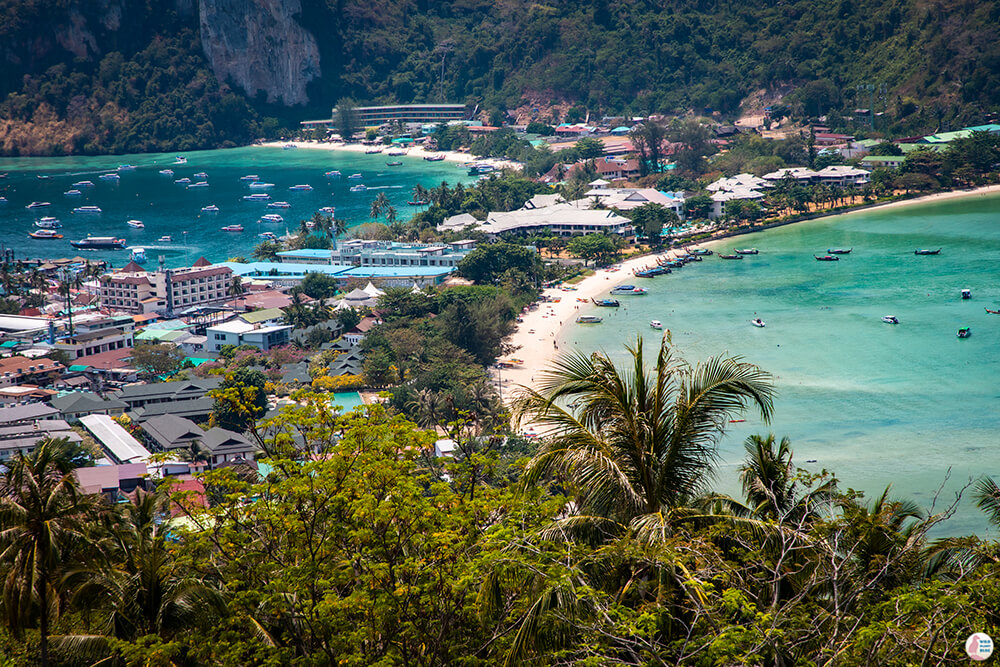 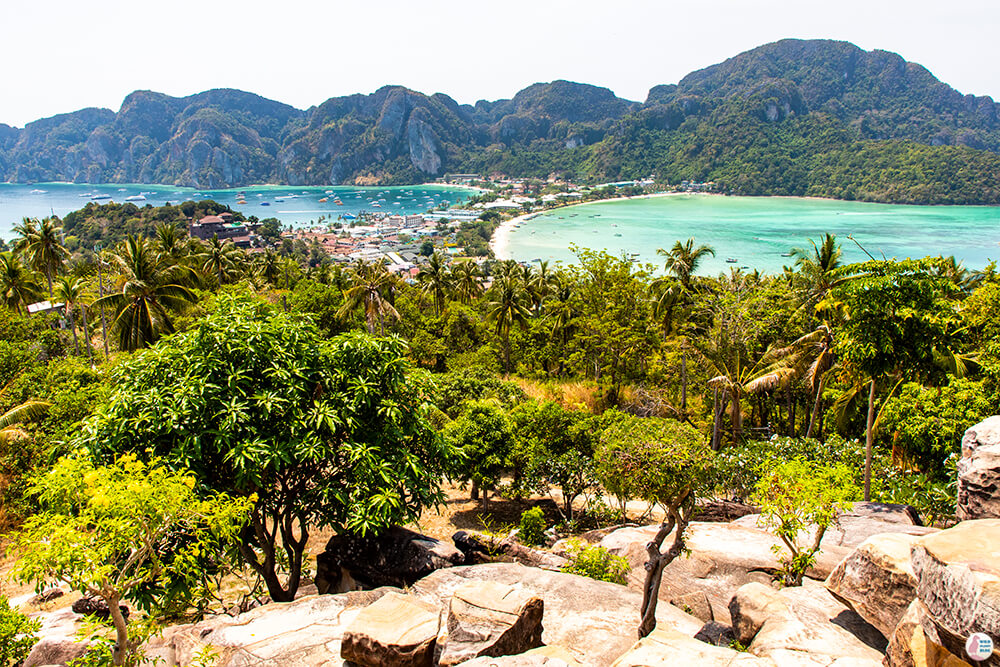 Even with a lot less tourists the main bay is still full of boats, however the view is amazing!

After getting back to the peer we finally had a few minutes to spare and this time there was also one free table for us to enjoy that fresh coconut I was craving from 2016!

After this, we went to the other side of the island, to Nui beach and snorkelled close to the rocks! 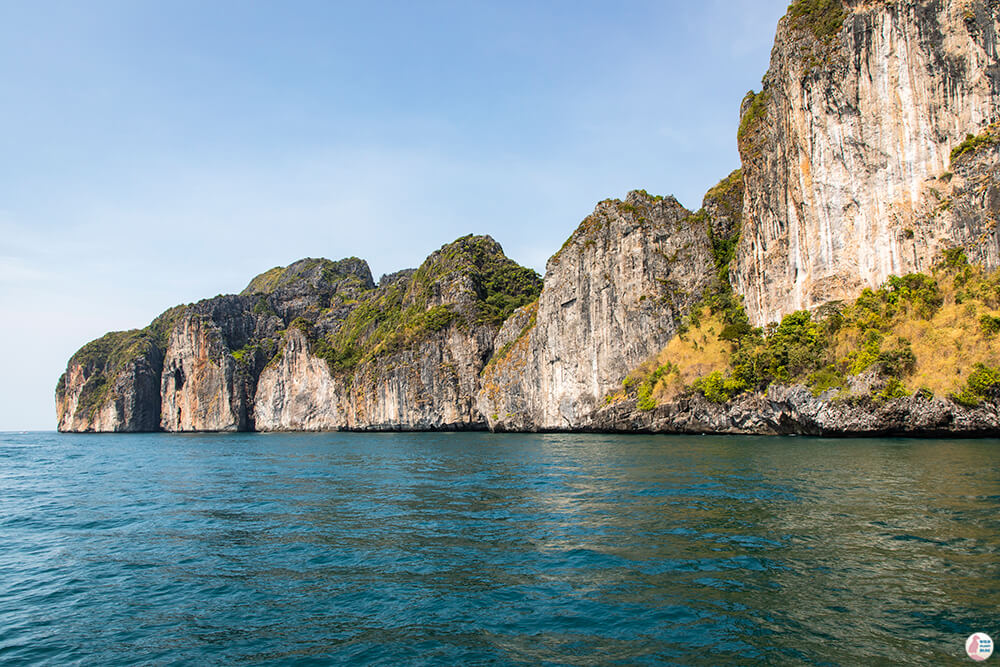 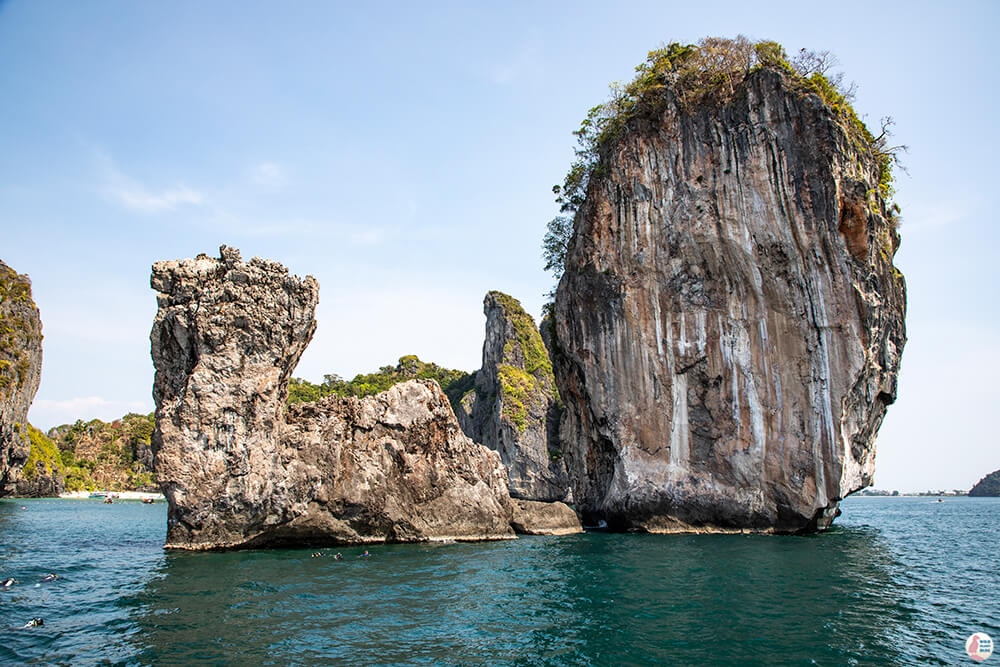 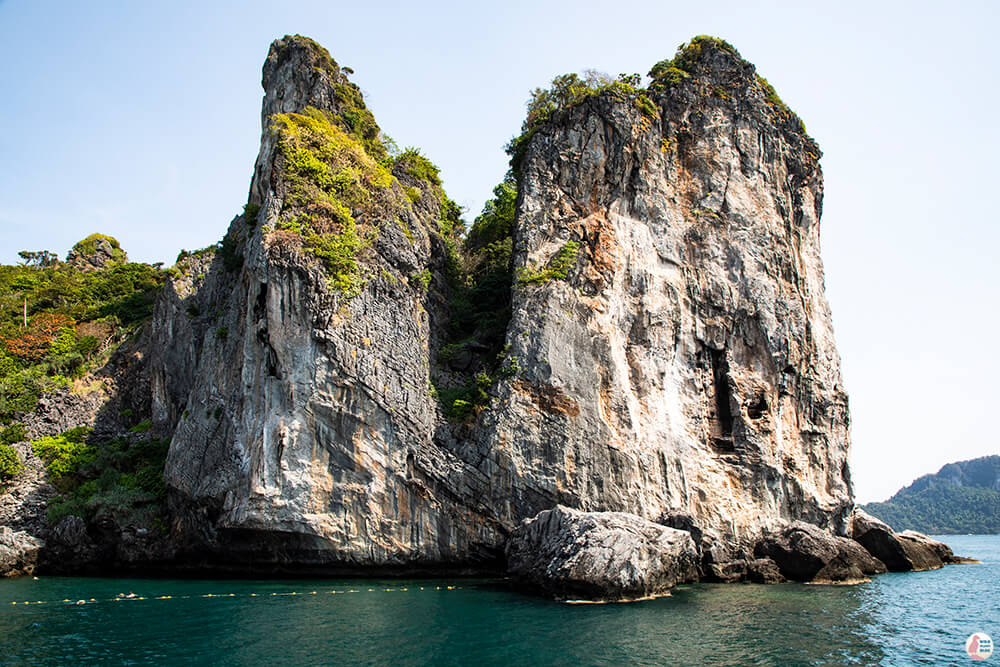 During our trip we also visited Ko Phi Phi Le and snorkelled around the cliffs here. The whole area is amazingly beautiful, however the water in 2020 wasn't as pretty as in 2016. The water around the islands was darker in colour, but still clear. In some places where we snorkelled there weren't that many fish, but the closer you got to the cliff the more fish you could see. When I got in the water I decided to not put any flippers on, but I was surprised how strong the current around the cliff was and it was quite difficult to swim back to the boat without flippers, even if the distance was very small. 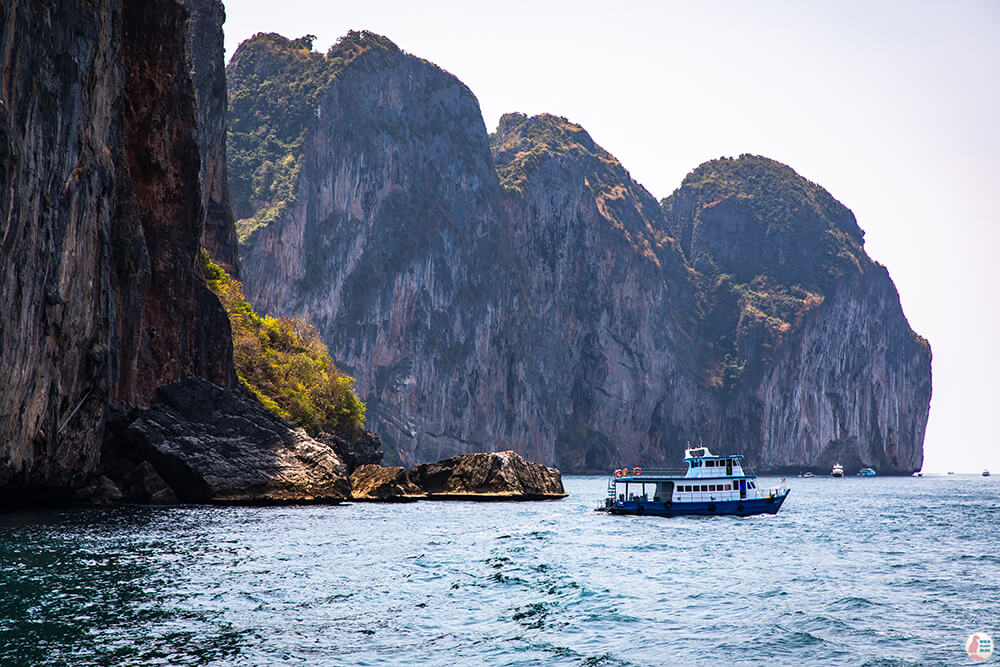 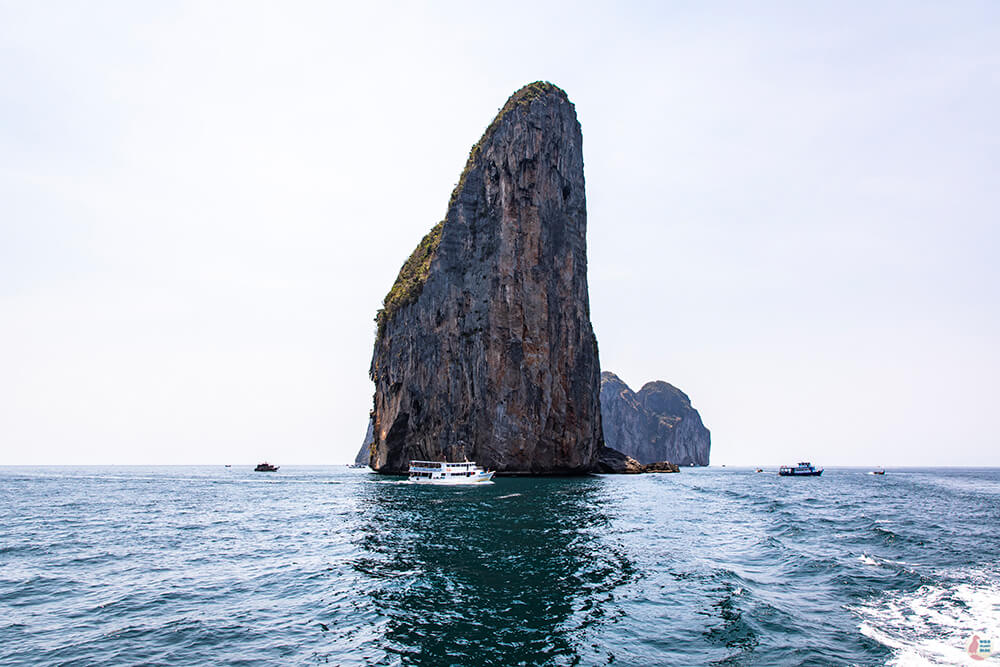 Then it was time to say goodbye to the Phi Phi Islands and went back on a very relaxing trip back to Krabi. 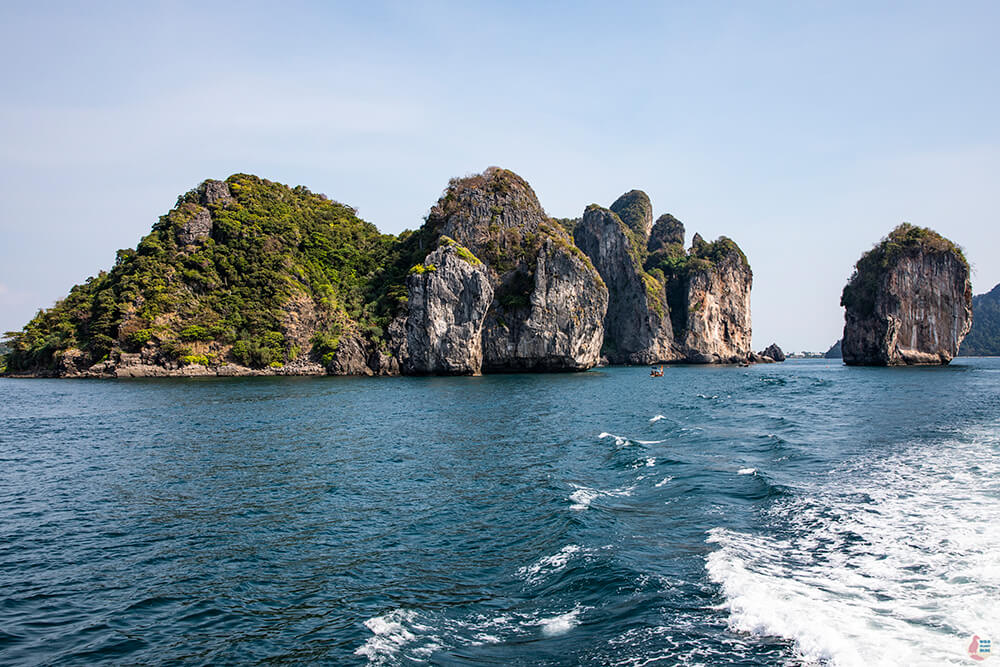 Despite all the tourists, I do recommend visiting the Phi Phi Islands because the cliffs around these islands are absolutely stunning! However, do not get your hopes up about lonely beaches or nice and relaxing nature, as the constant noise from all the boats around are pretty much going to ruin that. 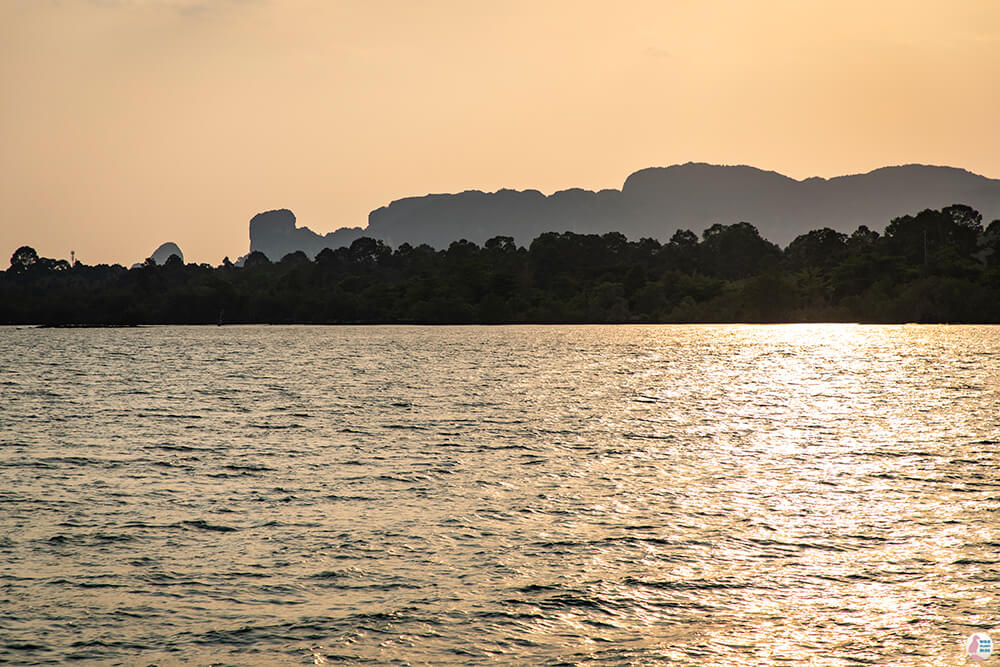 Two of the most beautiful places I have visited during my stay in Krabi are the Blue Lagoon and the Tiger Cave Mountain Temple. This one day tour takes you first to the hot springs of Krabi, following by the Emerald Pool and Blue Lagoon and later in the day you have the possibility to climb 1 260 steps to one of the best viewpoints in all Krabi, the Tiger Cave Mountain Temple!

One of the best ways to experience beautiful caves, lagoons, mangrove forests and amazing limestone formations in Krabi is by kayaking in Than Bok Khorani National Park, on the Tha Pring river and the small channels connecting to it.

Khao Ngon Nak hiking trail offers incredible panoramic views of Krabi province in Thailand! This trail is also known as the “Dragon Crest” and some might argue that the views from the mountain peak are the best in Krabi!

With its amazing karst landscape, Khao Sok National Park is one of the most beautiful places I have ever visited! Perhaps the most famous attraction is the man-made Cheow Lan Lake with its tower-like limestone formations rising from the blue and turquoise waters!

The islands that you will discover on this tour are some of the famous paradise islands in Krabi: Tup, Chicken and Poda Islands. On top of these three islands you will also get to explore a part of the Railay Bay: the Phra Nang Beach.

During my 2 weeks holiday in Krabi I was hypnotised by all the beautiful nature this place can provide! The limestone mountainous landscape, incredible beaches, lush vegetation and crystal clear pools from hot springs were incredible! Here are my best nature sights to visit from Krabi, Thailand!

One of the most popular attractions in Thailand are the Asian elephants and spending a few hours with these beautiful animals are definitely something you will enjoy! Visiting Krabi Elephant Sanctuary is an ethical way to interact with elephants and they don’t allow riding the elephants.

Railay Bay and Railay Beach are probably the highlights of the Krabi coastline and you could easily spend a full day exploring Railay Bay by yourself, especially if your hotel is located in Ao Nang.

The best way to spend an evening in Krabi is watching the sunset around the Hong Islands, aboard a sailing boat!

Thailand - The Land of Limestone Cliffs and Paradise Islands

With its incredible karst landscape featuring limestone cliffs and caves rising from the clear, blue waters and its amazing white sand beaches, Thailand is the best destination for nature enthusiasts, who love plenty of sunshine and humidity!