São Miguel Island, situated in the Portuguese Azores archipelago, has lots of lagoons and beautiful landscapes, most of them being accessible by car, however there are amazing nature trails and waterfalls to discover in Azores and you should take some time to explore these wonders on foot, walking and hiking through lush vegetation and forests.

Here are some of the best waterfalls and nature trails to discover on São Miguel Island, in Azores! 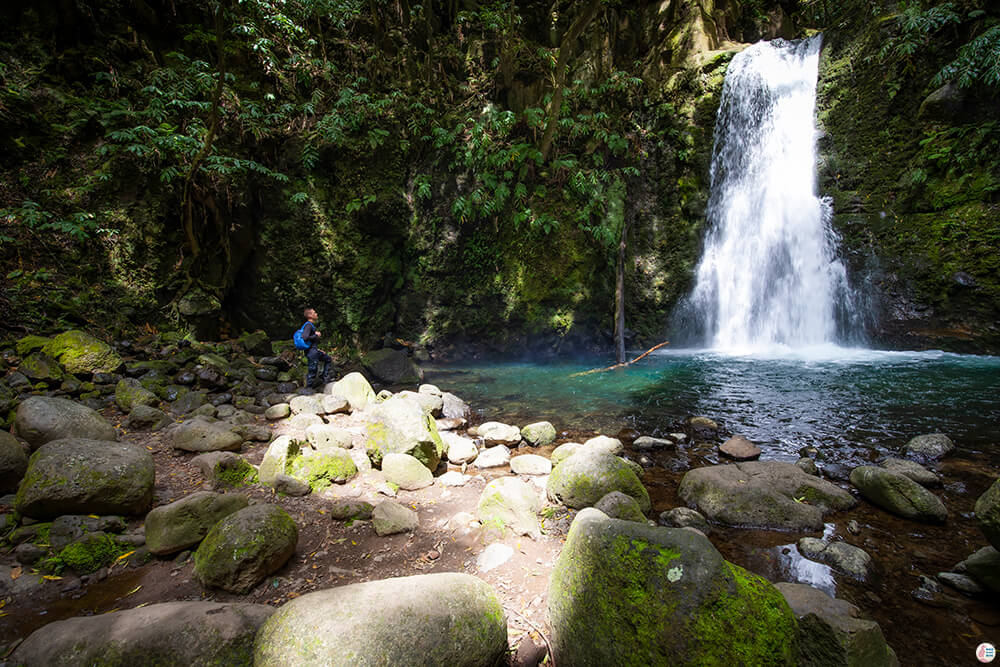 Faial Da Terra is an amazing nature trail that takes you deep in the lush vegetation of São Miguel's forests. It's best if you use hiking shoes on all the nature trails in Azores, even on the easy ones. Faial Da Terra is a relatively easy to hike path and you shouldn't have problems reaching Salto do Prego waterfall. There are uphills and downhills, dirty and muddy paths, but, unless you have severe joint problems, probably you have nothing to worry about. Faial da Terra nature path is around 6 km in total and you should reserve at least half a day for it. You can start by hiking to Salto do Pedro, which is around 2.5 km away from the parking spot, through the forest, alongside the river. 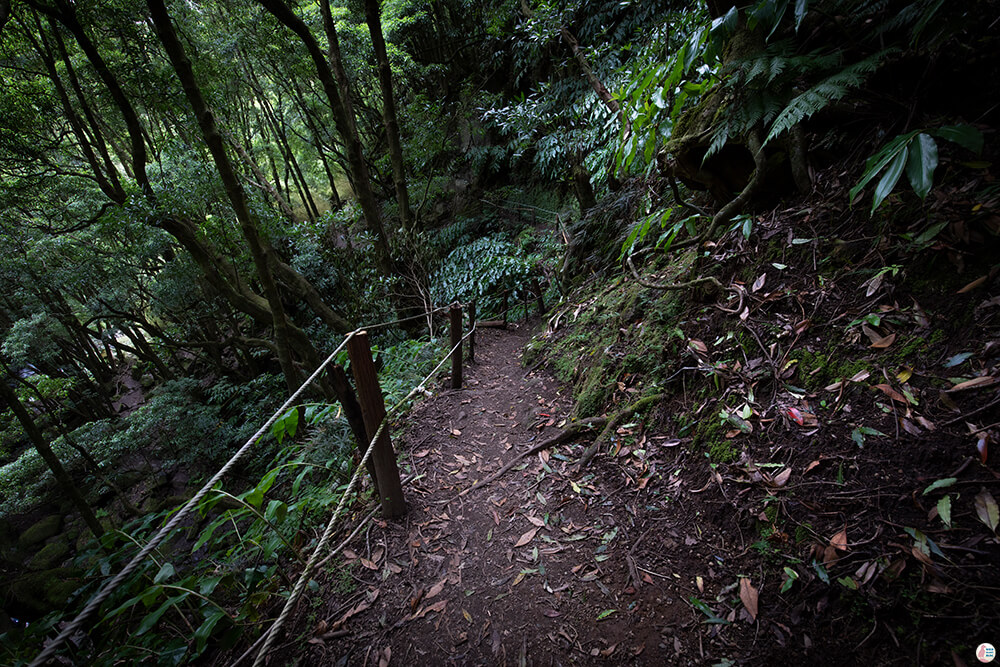 You may encounter some friendly locals along the way that are free to roam the area. 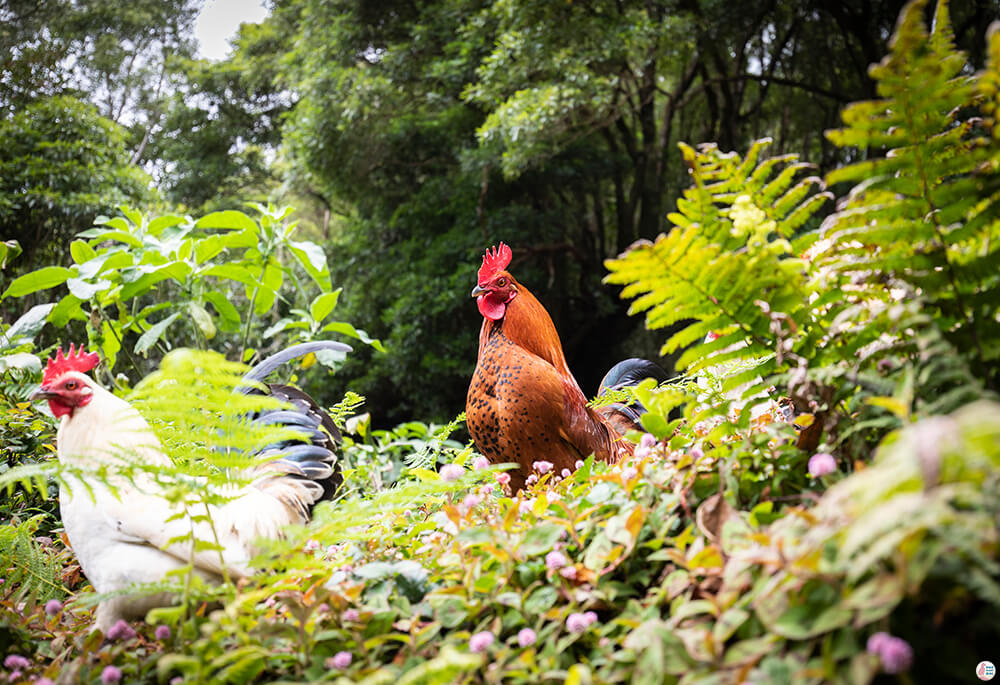 Salto do Prego is probably the most beautiful waterfall on São Miguel Island, with beautiful hues of turqoise, blue and green and it looks even more spectacular in the sun! 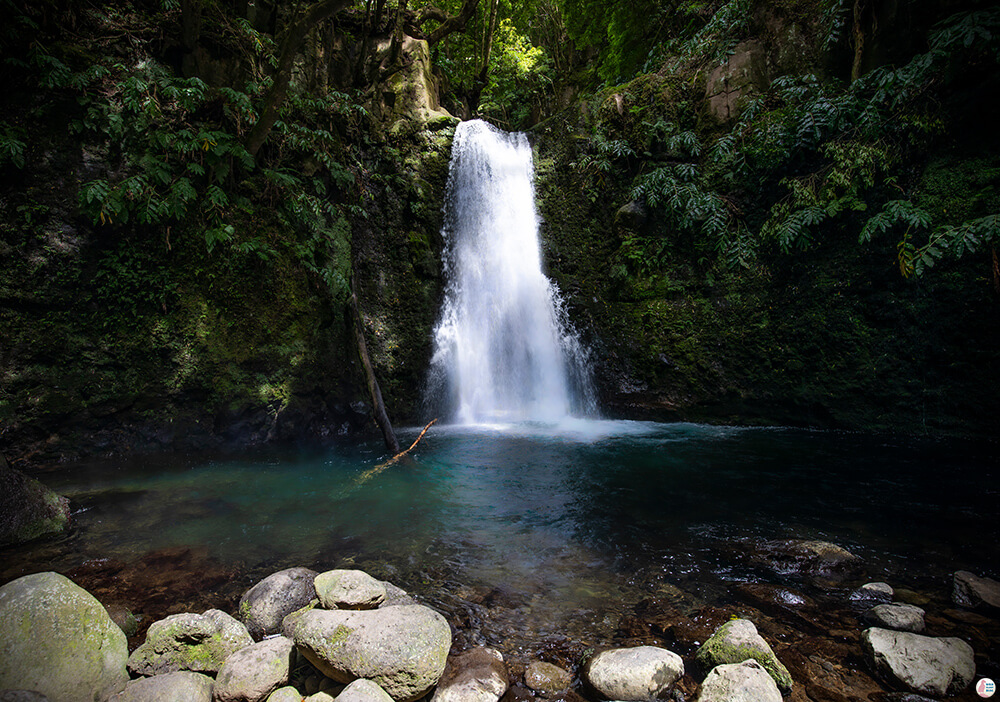 After admiring Salto do Prego you can go beyond the waterfall, on the path and you'll reach the river. 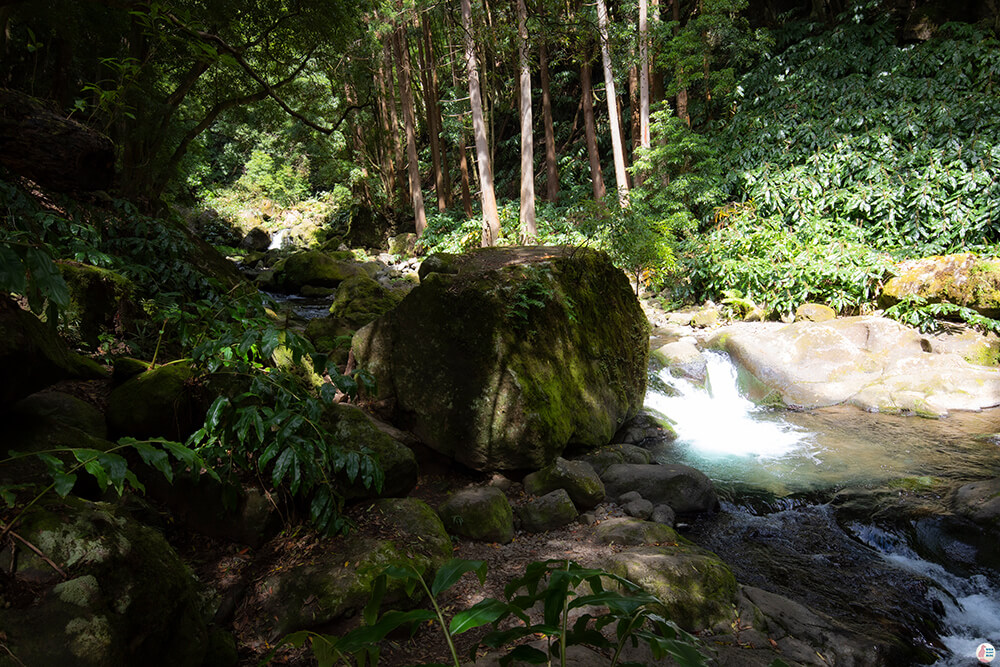 If you have time and stamina you can hike also to Salto do Cagarrão, which is another 2.5km away. Unfortunately we were in a bit of a rush and it was quite hot, so we skipped this one. From the pictures it looks like a smaller version of Salto do Prego.

On your way back from Salto do Prego, you should turn on the path towards Sanguinho, the lost village. 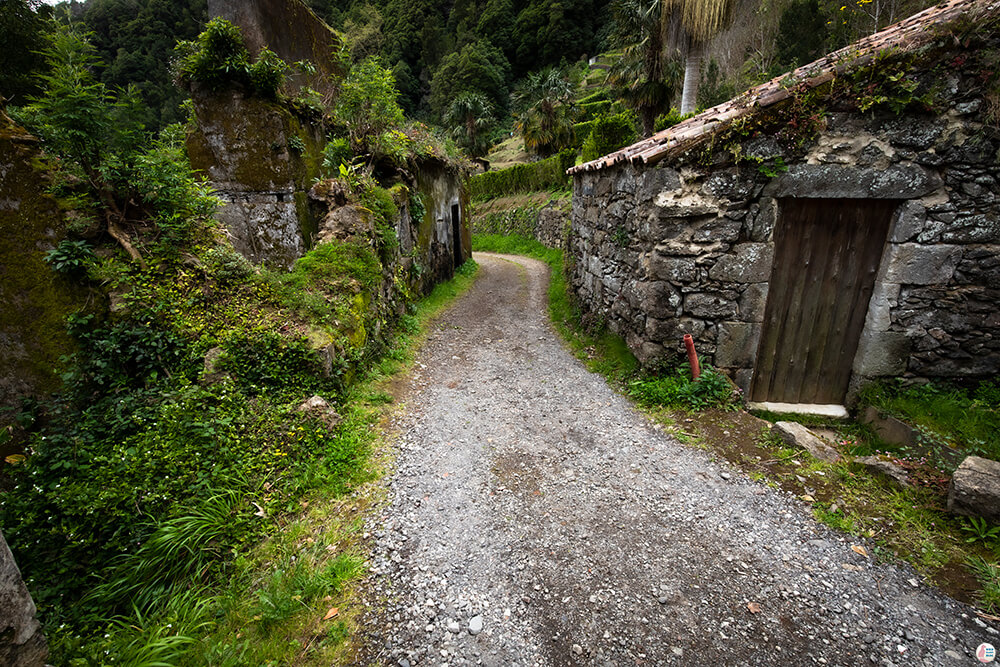 Sanguinho was inhabited for more than a century, however the place is not easily accessible, there was no easy way for children to get to school and people started migrating to America in the 60's and 70's, so ultimately the place was abandoned. In 2001, BBC made a documentary about Sanguinho, calling it "The Lost Village".

Nature has a way to return to abandoned places, so the whole area looks surreal: vegetation is covering the abandoned houses, however you can still see the house number on the walls and you can imagine how this place used to look like when it was inhabited. 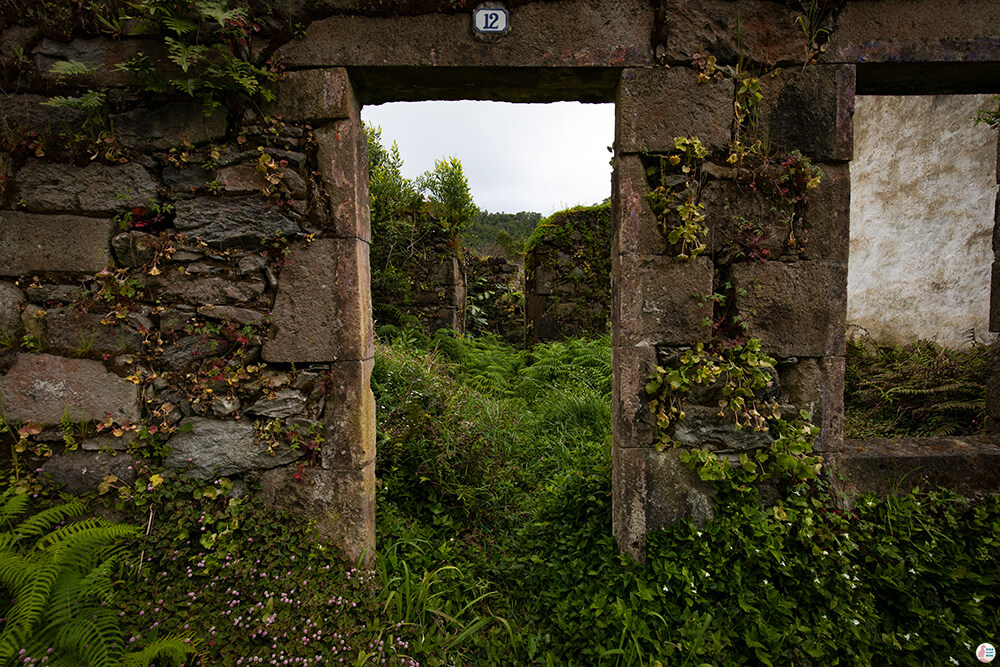 There is a long way down from Sanguinho to the initial parking place and, if you have knee problems, you might want to take your time. I usually have joint problems when it comes to walking down steep paths, but, surprisingly, this whole trip I was OK! 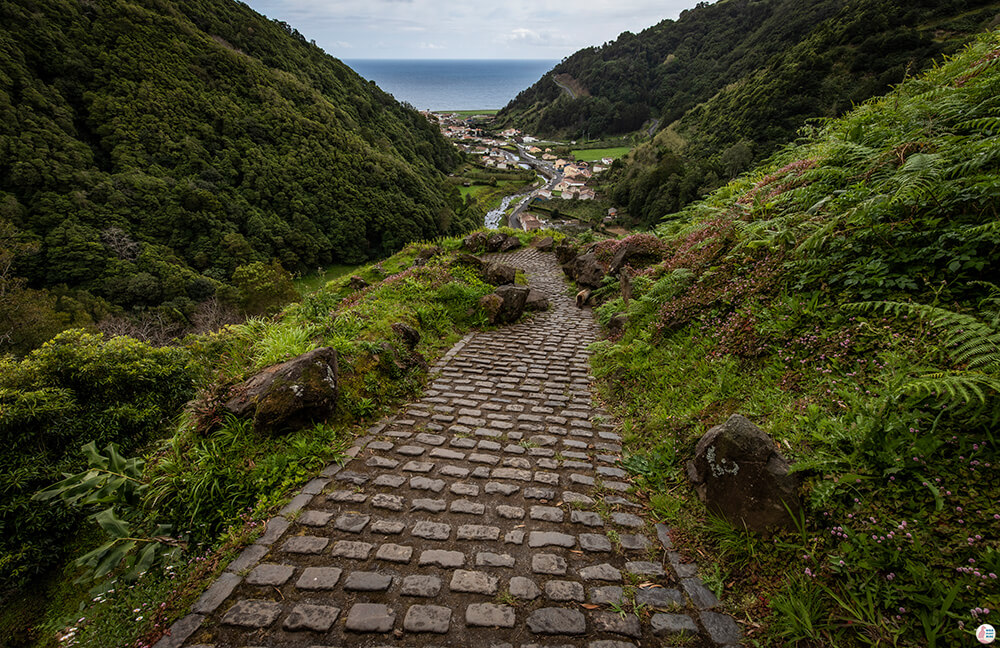 2. Salto do Rosal, just before the Garden of Lagoa das Furnas 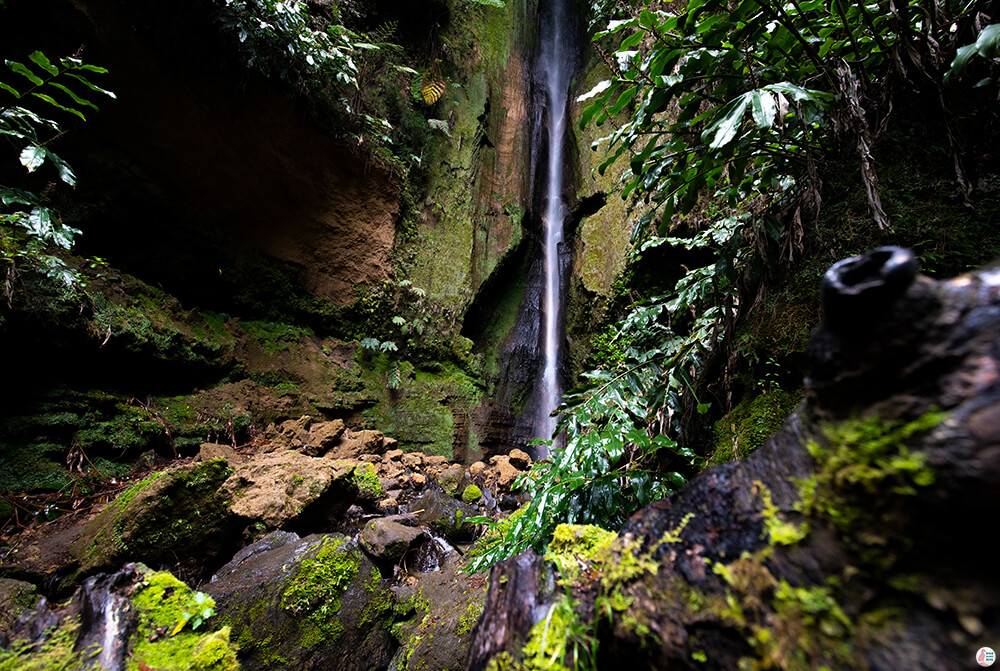 Salto do Rosal and the nature trail that leads to this beautiful waterfall was a hidden gem! We only discovered it because we stopped to take pictures of this beautiful road, right before the Garden of the Furnas lagoon. 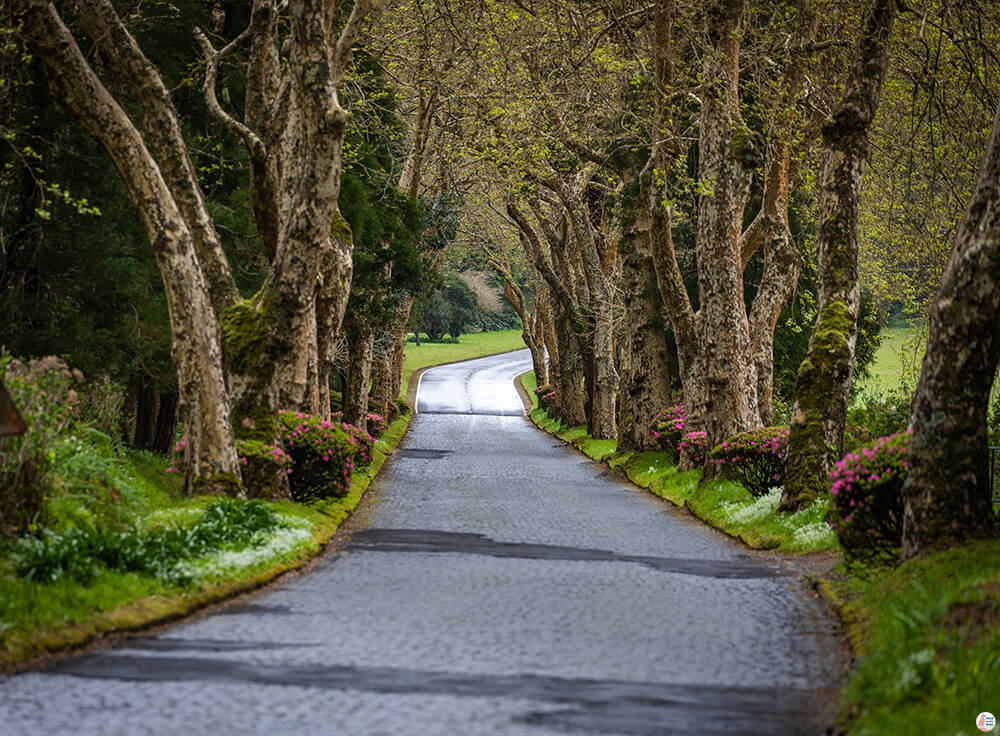 We noticed a couple returning from this place and we just checked on maps.me map if there is something else to see around. Google maps doesn't even know the place!

We had some spare time and we were sitting in the car for almost the whole day, so we decided to go for a walk. What we found on the way was spectacular! Not sure why this place is not really mentioned that much, but this was one of the most awesome nature trails that we have experienced. The real beauty of it was that it wasn't long (it's about 1.5 km) and there were no hills and really easy to walk.

The walk started with some beautiful flowers, next to a field with cows.

Then we reached a giant sequoia and a forest of smaller sequoia trees. 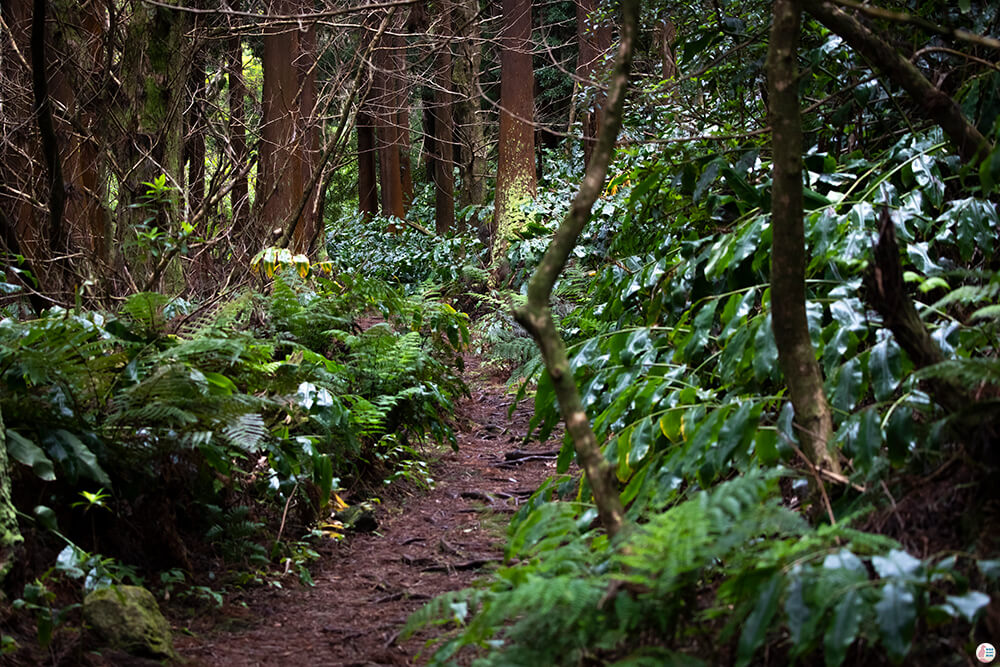 After that the path goes through some meadows and lush vegetation and finally you can see the small waterfall! 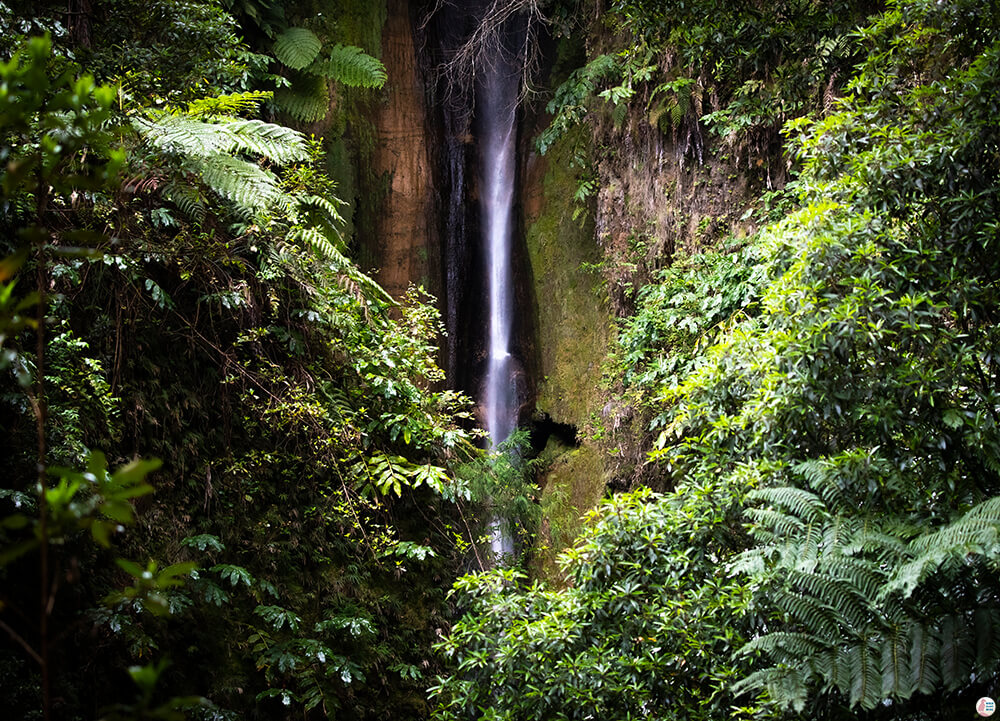 This nature trail is definitely worth visiting and the best thing about it was that we were all alone! I guess not that many people know about it yet :) 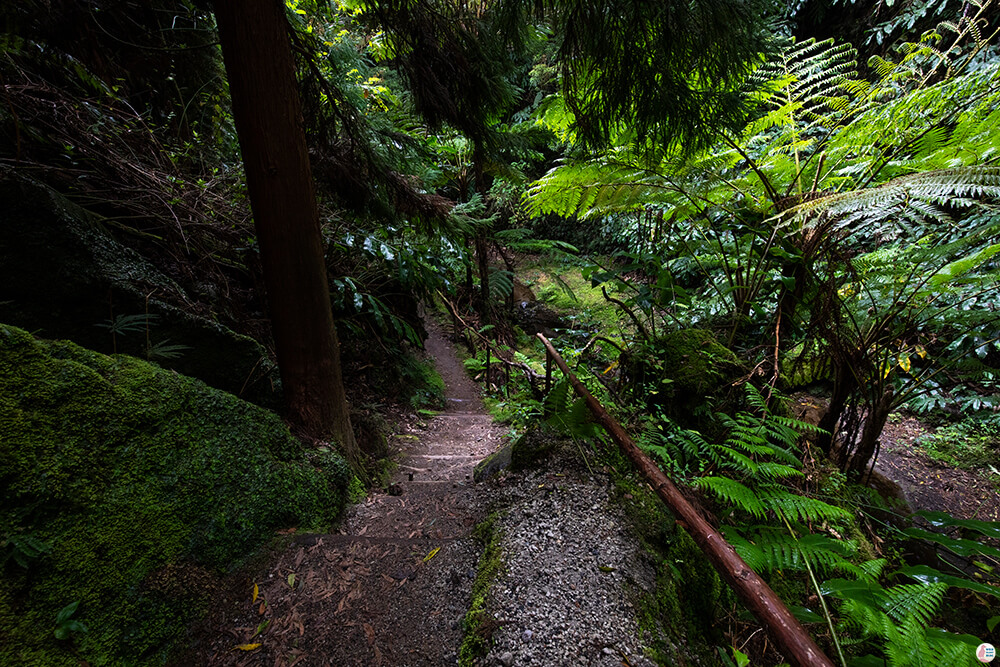 3. Praia - Lagoa do Fogo and hiking inside the crater

Lagoa do Fogo is the most impressive lagoon on São Miguel Island and it's not enough to admire it just from above! Hiking inside the crater of the lagoon towards the beach is amazing! This nature trail will probably take more than half a day, so reserve plenty of time for it. 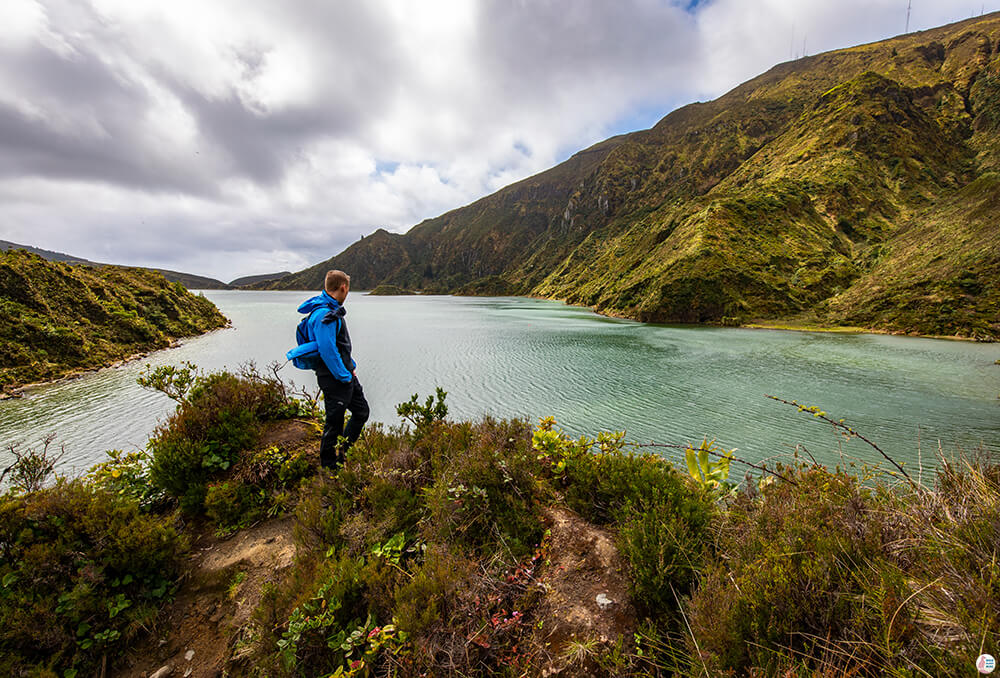 The nature trail starts from Miradouro sobre a Lagoa do Fogo and I would say it's not an easy trail. The first part that goes down the crater, towards the bottom of the lagoon is the most strenuous, with muddy "stairs" carved into the soil, that collect water. After you get to the bottom, you'll need to climb a rather steep portion of the trail, but after that it gets a lot easier!

After this portion of the trail, you just go alongside the water and you will reach the "beach". Swimming was prohibited, so don't imagine that this is a beach where people lie with their towels in the sun and go swimming. 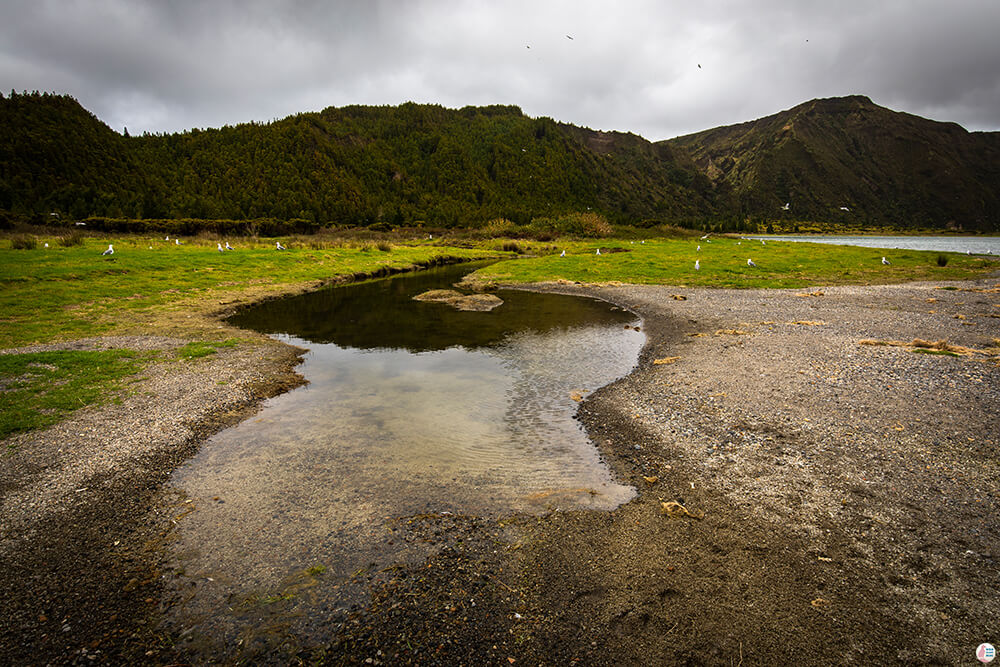 There are many seagulls nesting here and most of them were peaceful, but some of them started to harass us if we got too close to their nests.

We were looking for a way back by hiking on this portion of the crater, but we couldn't find any path to lead up. We had to get back the way we came and the last portion was quite difficult, especially with a heavy backpack, that had my camera equipment, in my back.

This is a truly amazing place and it is my absolute favourite on São Miguel Island! 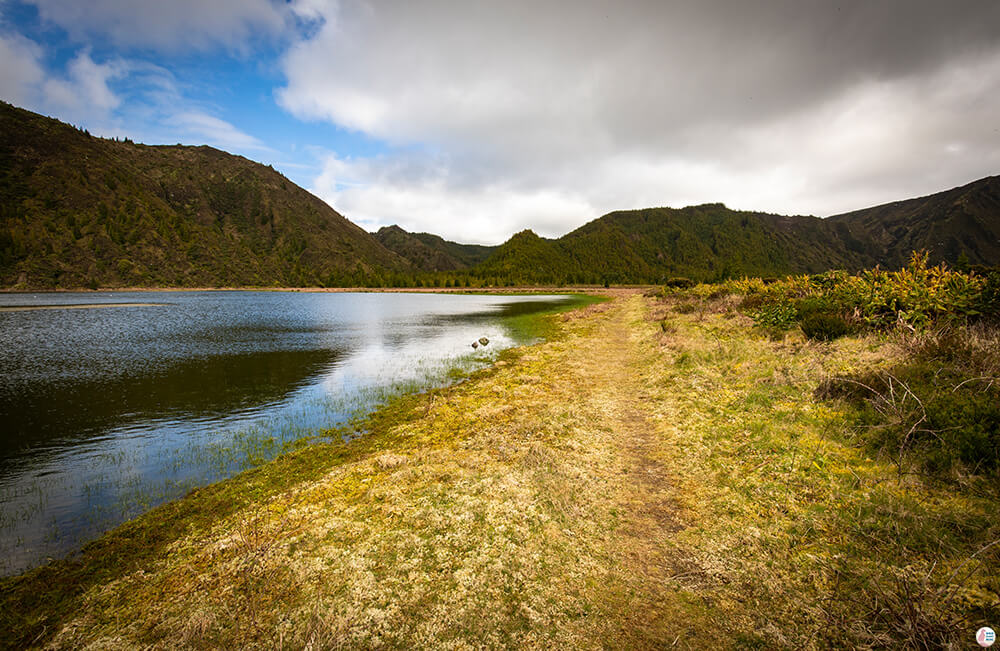 4. Hiking to Miradouro do Pico do Paul and Lagoa das Éguas

The landscape around Lagoa das Éguas is very unusual, it felt almost like I was in Lapland in the autumn time. The colours were vivid yellow and orange and the only thing that gave it away was that the needle-like leaves of the pine-like trees were slightly different. This is a short hiking trail, maybe about 2.5 km in total and very very windy. The view from around Lagoa das Éguas makes it all worth the trip! 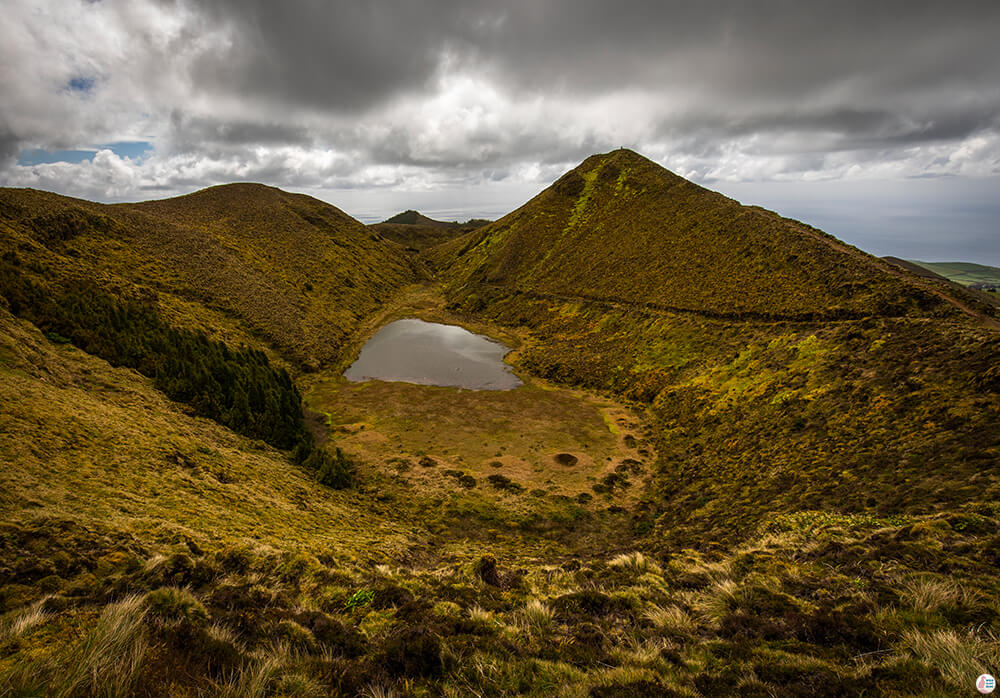 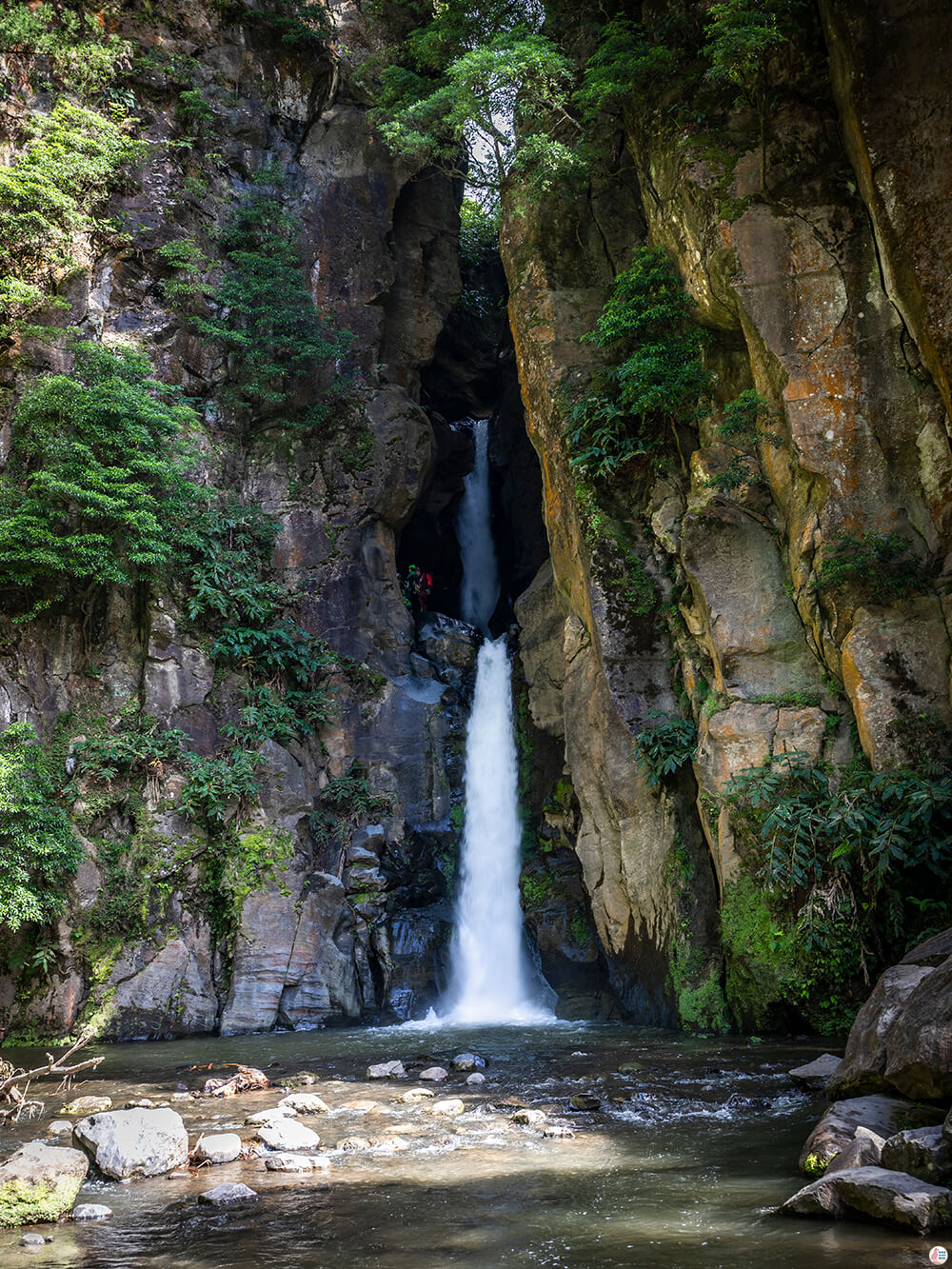 The road towards Salto do Cabrito waterfall is a bit bumpy, but you can get quite close to it with the car. Next to the waterfall there are some stairs going up that lead to a metal path on a water pipe alongside the waterfall. 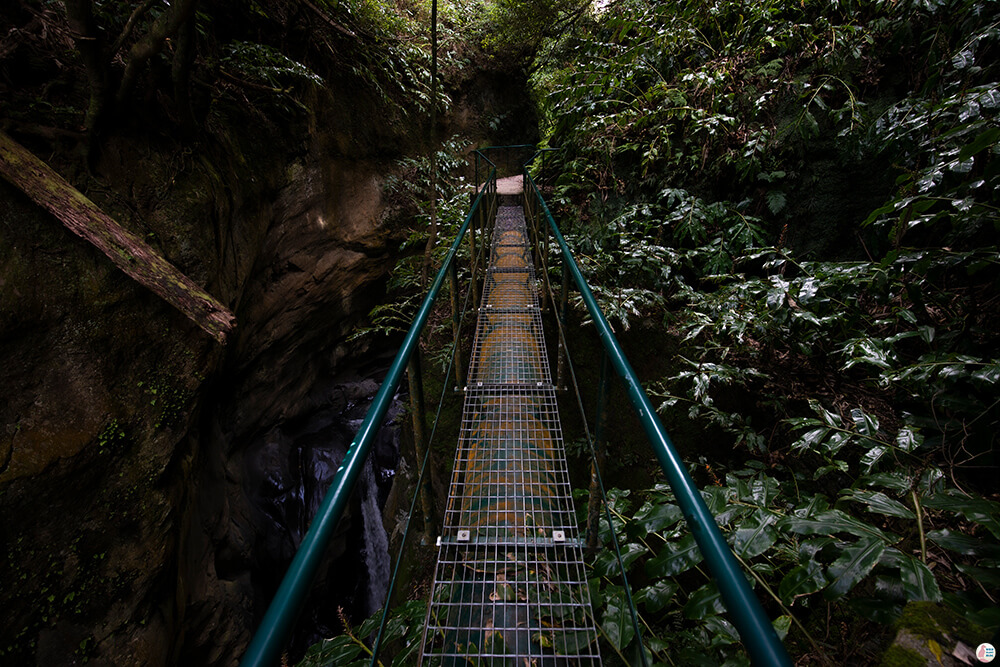 This bridge from above is pretty scary because it's really high and you can see what's below, but that is what makes it so cool! You get to see the other side of the waterfall. When we were there there were some climbers on the wall of the waterfall, so I guess that is possible, if you are into wall climbing. 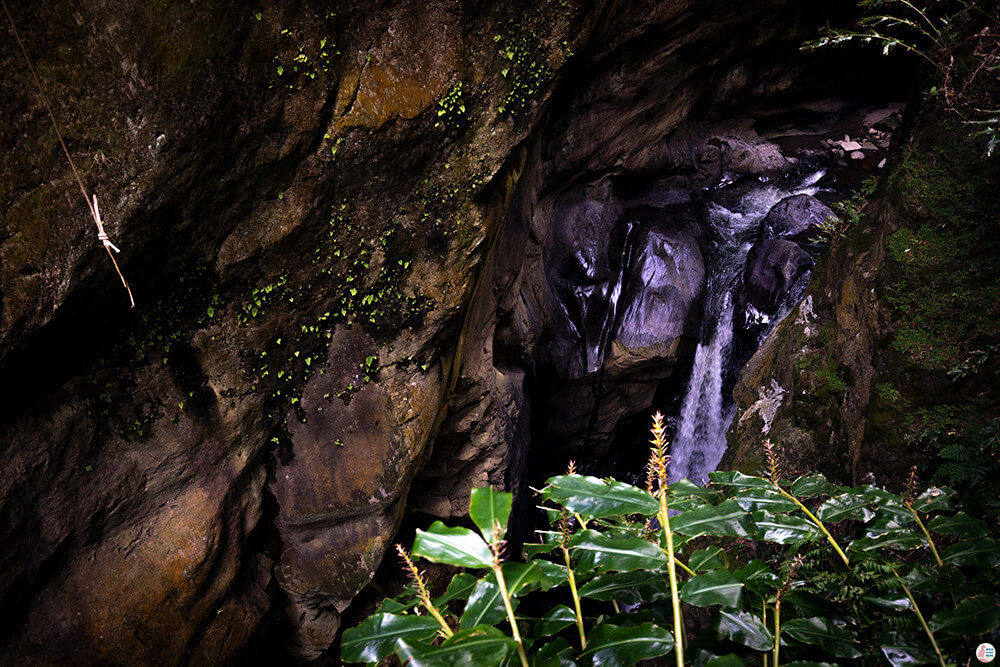 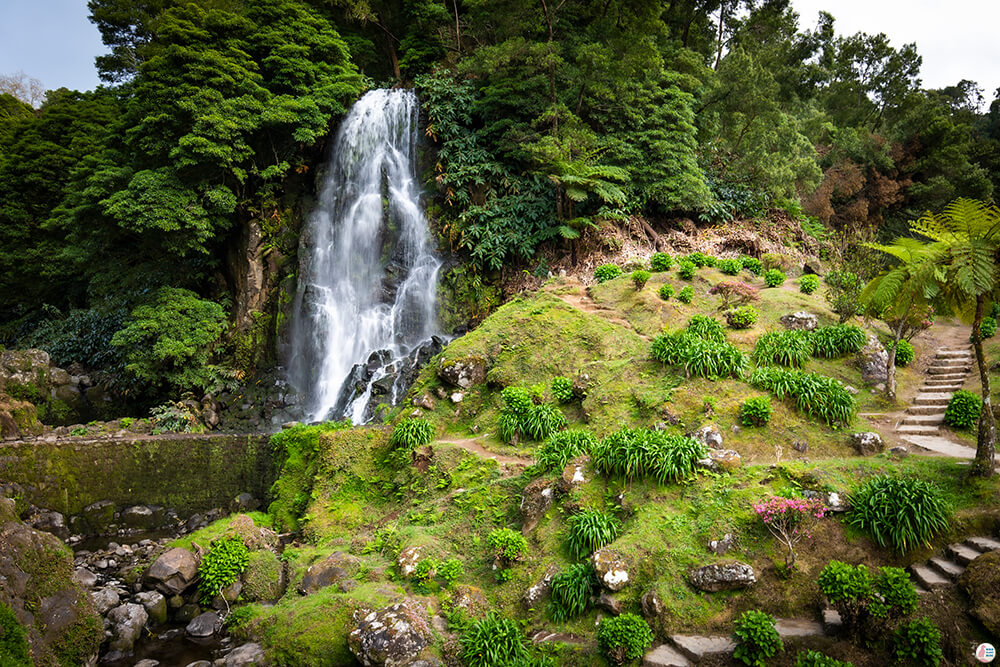 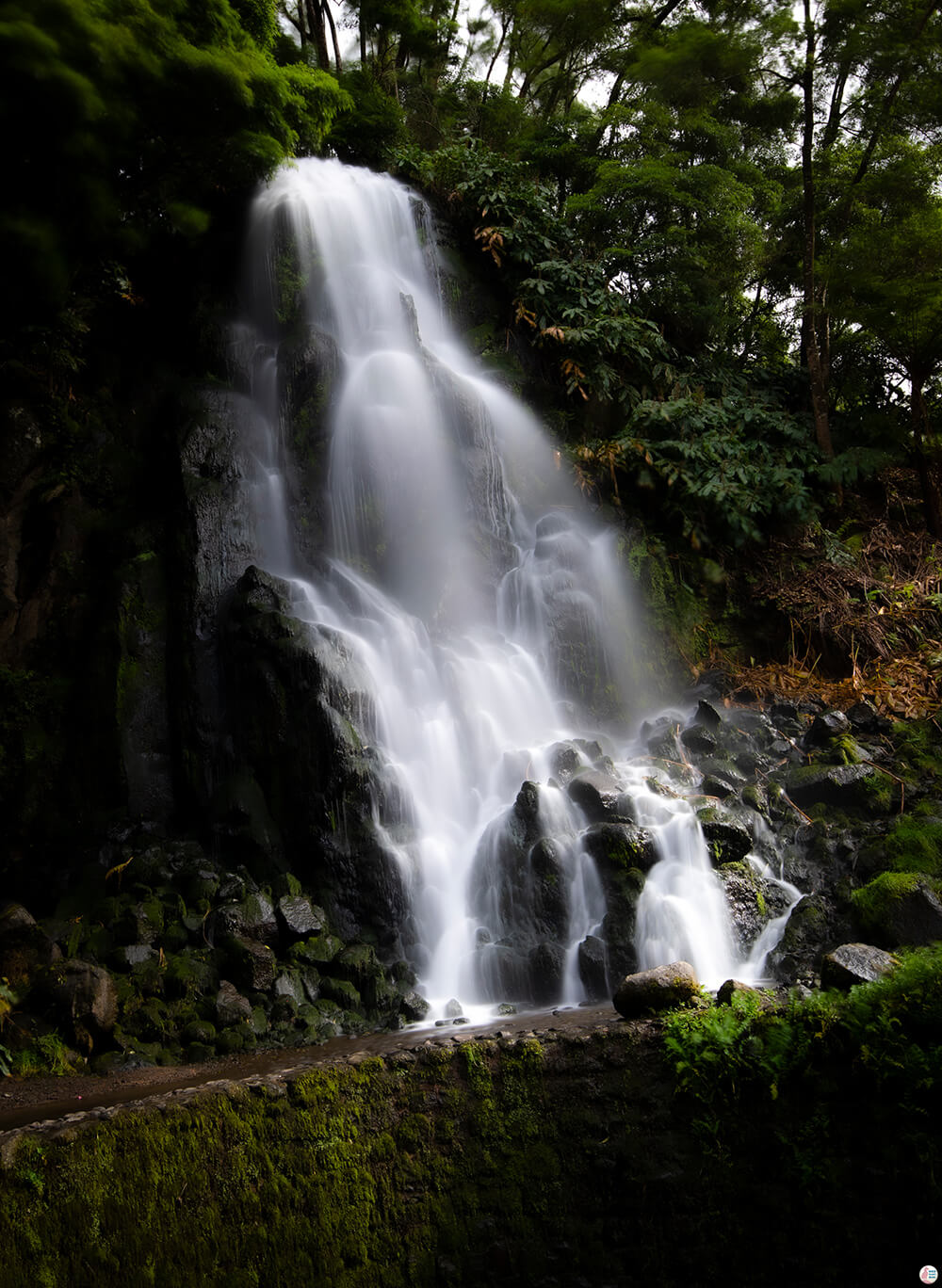 Parque Natural dos Caldeirões is a beautiful park next to Ribeira dos Caldeirões, that has two waterfalls. The main waterfall looks like it had its course deviated, so it might be human made. This first waterfall is the main attraction here and it is quite beautiful! 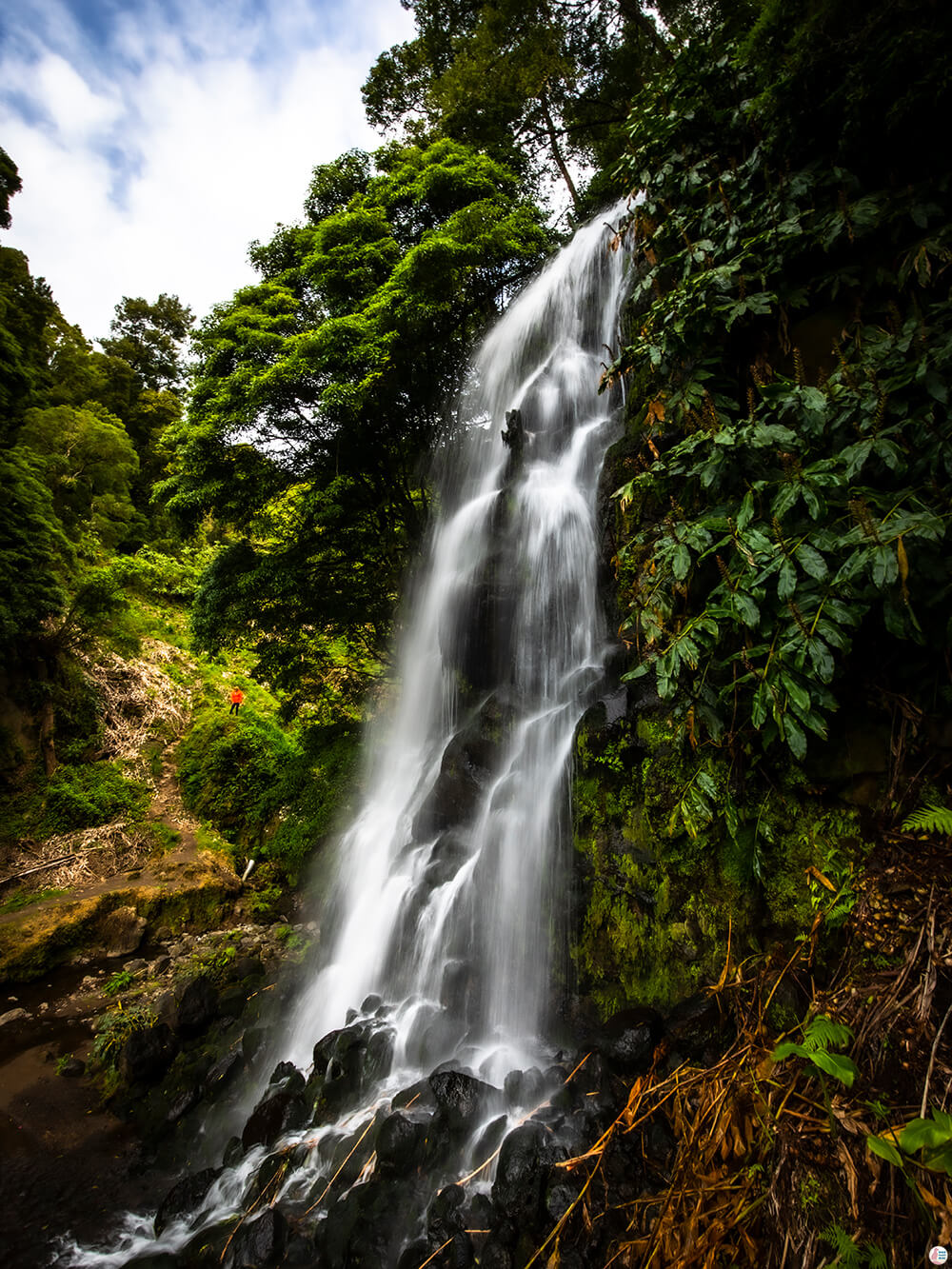 If you walk about 600 m away from the first waterfall, you'll see the second waterfall of Parque Natural dos Caldeirões and an amazing looking meadow. 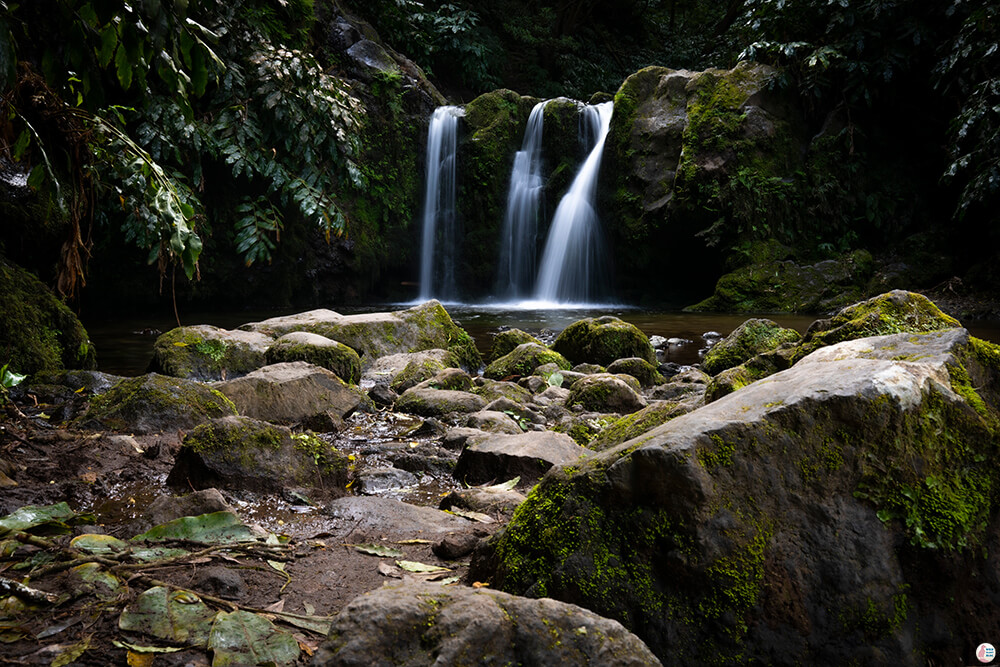 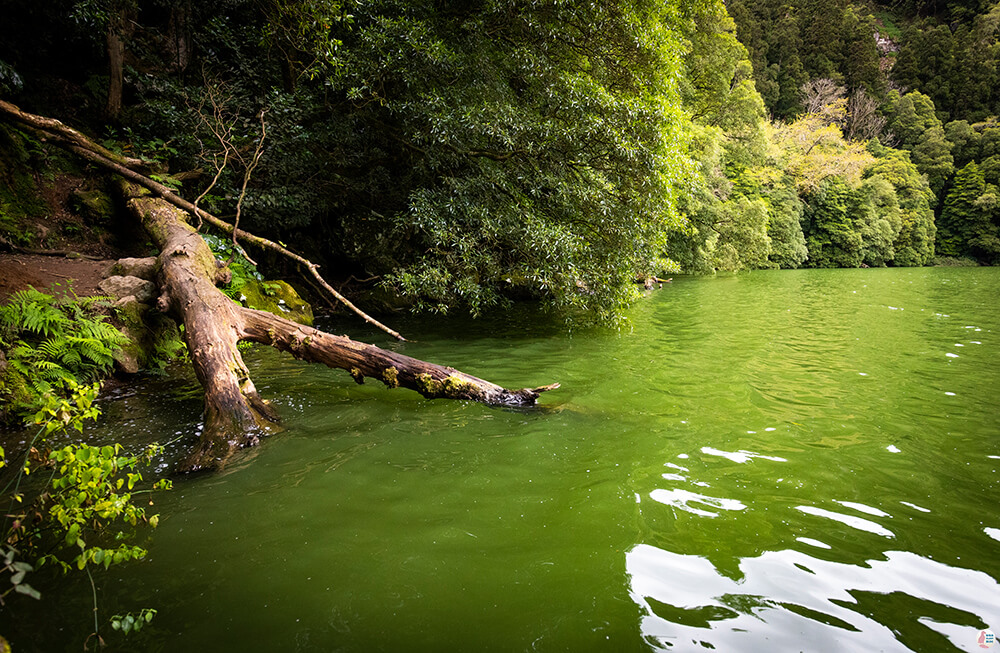 To get to this beautiful lagoon, you need to go down the mountain for around 15 minutes, through lush vegetation and forest. There are several nature trails around the Congro Lagoon and you can see this awesome looking lagoon from different small openings through the trees.

The Congro lagoon is truly magical! 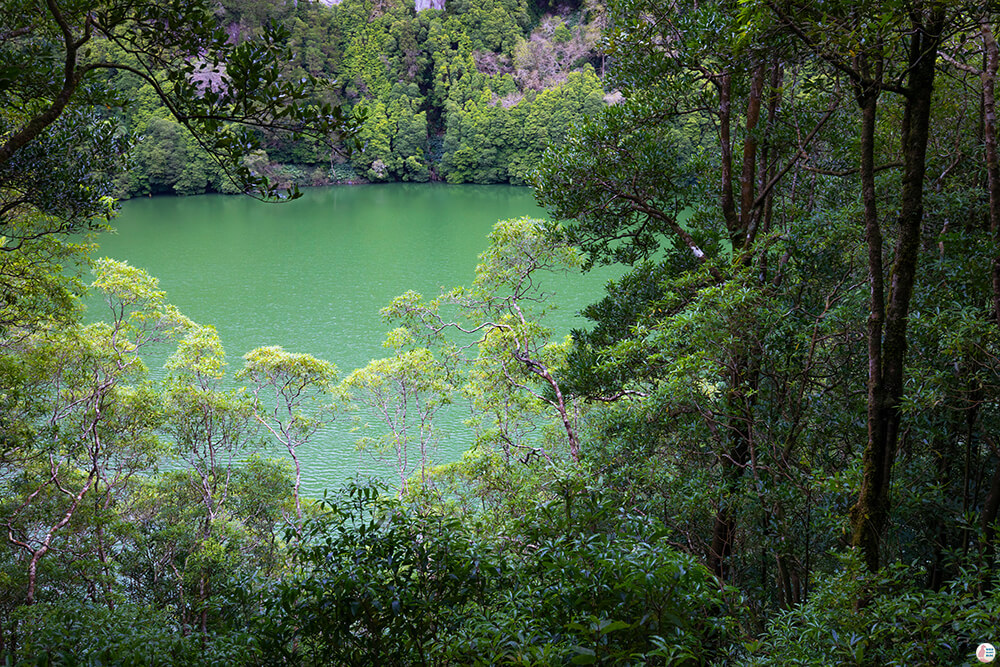 I definitely recommend walking around Lagoa Verde. There are many birds around the area, it's peace and quiet and there are really stunning views of the nature around the lagoon. 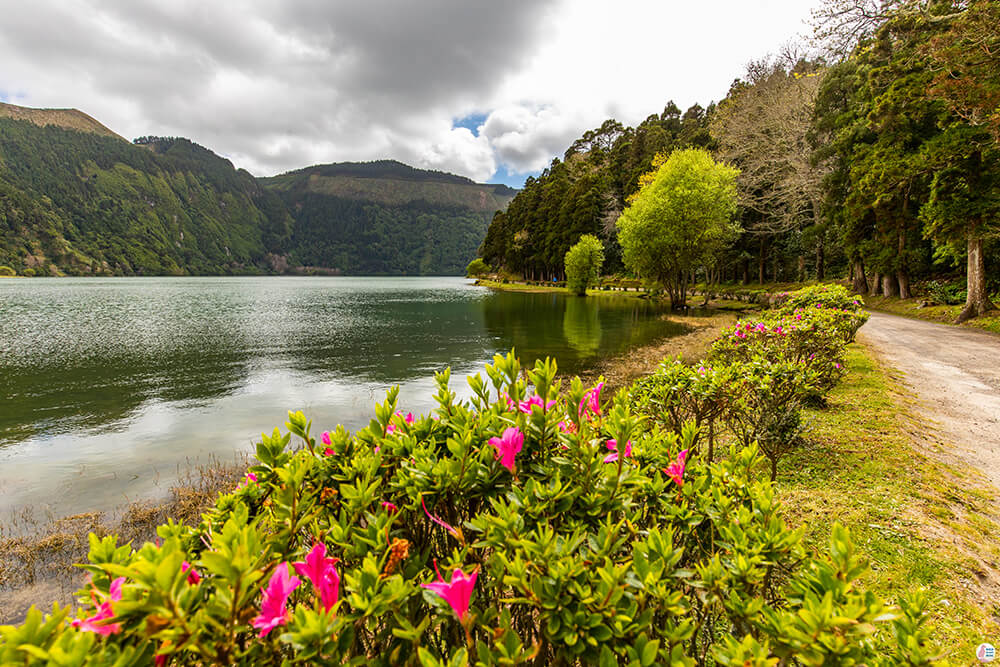 São Miguel Island is an awesome place to explore nature, forget about work or problems at home and just enjoy the silence and the beautiful nature trails and landscapes that this island has to offer! I hope I will return someday to this place!

You might also want to read Best places to photograph on São Miguel Island, Azores

São Miguel is a volcanic island Azores archipelago with great mountains, lagoon and waterfalls. Here are the best places to photograph on São Miguel!

Madeira is a group of islands in the Atlantic Ocean, off the cost of Africa that belongs to Portugal. With its lush vegetation, high mountain peaks and great cliffs pointing towards the ocean, Madeira is an awesome place for landscape photography. Here are the best places to photograph in Madeira!